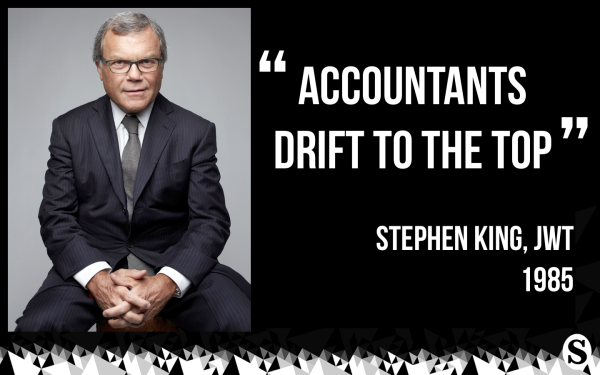 “Even in the stable packaged goods markets, there has been a new type of marketing failure – Accountant’s Marketing.  The producer bureaucracy has played its part here too, as companies get bigger and bigger, through mergers and acquisitions.  Gradually the accountants drift to the top of the organization, replacing those whose experience has been in either the company’s products or its customers”

Quote from JWT’s Stephen King in 1985 (from “Has Marketing Failed, or was it Never Really Tried”).  Picture of Sir Martin Sorrell, who bought JWT in 1987 after a hostile takeover.

I’ve been doing a little research on this*.

There’s some new figures out for 2012 in the next few weeks.

If you want to be a CEO, you’d better get into the Finance dept. it seems.