To celebrate the launch of the Winter 2013 Artefact Cards, I thought I’d share the story of their development on here, in detail that is perhaps as long as these Winter evenings… 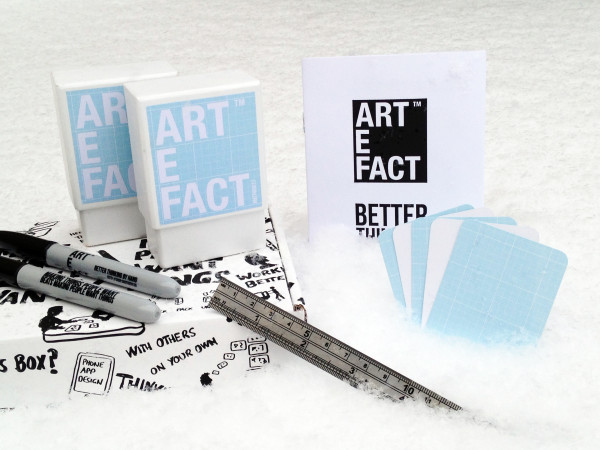 i – The Structure of Winter These are the hard yards, these cold January days.

People return from the seemingly never-ending celebrations of December to the what feels like the coldest, longest month imaginable.

Some heap additional misery upon themselves… giving up this, forgoing that, forcing themselves upon literal and metaphorical treadmills.

Yet January has its merits.  It returns us to a sense of order, beginning things again, or starting them anew.  It is an excellent planning month.
“Winter is the time of promise because there is so little to do – or because you can now and then permit yourself the luxury of thinking so.” – Stanley Crawford
January is when a lot of that to-do list falls away.  The festive break seems to wash away the ephemera; tasks which were so urgent in December, yet are forgotten afterwards.

People spend January rediscovering what it is they do.

Or discovering what it is they want to do.
“The tendinous part of the mind, so to speak, is more developed in winter; the fleshy, in summer.  I should say winter had given the bone and sinew to literature, summer the tissues and the blood.” – John Burroughs
It is a season for creating frameworks, building the scaffolding of the coming year.

So it follows that the this season’s Artefact Cards should be all about structure; helping you capture those delicate, fragile ideas, and bringing them in from the cold.

We are proud to present the Ice Blue Graph, the seasonal special for Winter 2013. “Let us love winter, for it is the spring of genius” – Pietro Aretino

It is in these Winter days that inspiration often strikes, and the structure around ideas and projects begins to form, like ice creeping across the bottom of a window pane.  It is fitting, perhaps, that the possible the finest box of Artefact Cards we’ve created arrives in the season in which the project itself began to properly take form. I spent a lot of last winter wandering around with this in my pocket.

It’s one of the Winter 2011 Northerly edition from Field Notes, who are the main inspiration for doing these limited edition seasons with the Artefact Cards.

When you’re starting out doing something new, you look around to see who does it brilliantly.  And Field Notes do seasons brilliantly.  They do a lot of things brilliantly.  I point you, for instance, to their story:

“Inspired by the vanishing sub genre of agricultural memo books, ornate pocket ledgers, and the simple, unassuming beauty of a well-crafted grocery list, the Draplin Design Co., Portland, Ore – in conjunction with Coudal Partners, Chicago, Ill. – brings you “Field Notes” in hopes of offering “An honest memo book worth fillin’ up with GOOD INFORMATION.”

On trains and planes, in coffee shops and waiting rooms, I mapped out across the pages of that Northerly notebook the first few sketches of what the Artefact boxes would look like.

How they’d be packaged, how to do a trial pack, refills and so on.  Components, material costs, seasonal ideas.

It began to bring structure to the idea of Artefact Cards – what it looked like as a product, rather than a project.

That Northerly book became the original repository for all of the ideas that Artefact Cards would become.

I turn back through the pages every so often, and find some great ideas we haven’t done yet, and some rubbish ideas we have.  And vice versa, thankfully.

I now use Artefact Cards offers to keep projects alive within.  Bad ideas are thrown away, good ideas replace them, new shapes and strategies are found by reorganising and rearranging. But I am still never, never found without a Field Notes book, for moments when I finds me some of that GOOD INFORMATION.

Or perhaps it’s this cover of this song that was a cover of that song; the cycle of inspiration that goes on, and on, and on.

But like all cover songs, you’ve got to bring enough of your own thing to make it worth listening to. Graph paper, the drums of the song.  It screams structure at the subconscious, gently guiding you to find order, precision.  Rather than a perfectly repeating square, I prefer a weightier margin every five lines… a bass drum for ideas, keeping them in line.

I wanted the bass blue to be punchier.  The lead guitar of a black sharpie needs to sit on a bass line that balances it out.

And balance really is important.  When you’re dealing with such a specifically sized object, you want it to be even.  None of that weird Graph paper overhang you used to get at the edge of school books.  If in doubt, cut out a chorus, shorten the guitar solo. I hope that whether this is a song you’ve heard before, or a song you’re hearing for the first time, you find it says something to you.

iii – The Artisan Who’s An Artist

Whilst we’re talking about the structure that these cold winter months offer, let’s look at something else you’ll find in the Winter 2013 box.

It seemed only right to include something that would help guide the conscious and subconscious process of working with precision when you use the cards.

There are some interesting tensions around the idea of precision in the modern age.  Whilst so many more of the things we do are measurable, a lot of the ways of working we set down for ourselves are, when you look at them, ‘by rule of thumb’… La Pouce, by César Baldaccini
RULE OF THUMB: “A useful principle having wide application but not intended to be strictly accurate or reliable in every situation.  The phrase itself has been in circulation since the 1600s. In 1692, it appeared in print in Sir William Hope’s training manual for aspiring swordsmen, The Compleat Fencing-master: “What he doth, he doth by rule of Thumb, and not by Art.”

Here’s the thing; if ‘rule of thumb’ is to mean ‘not strictly accurate’, as in the fencing example, it implies that precision and accuracy lies in the domain of the artist.  Where perhaps today numbers and measurement are seen as strictly the domain of the scientist and empiricist, it’s perhaps not so cut and dried.

There has always been, and will always be room in an artist’s hand for a ruler.

So we set out to find you one.

After much searching amongst the bric-a-brac and back alleys of the internet, we found just the thing. – conversion table on the reverse side (inches to mm) Not one of those rubbish ‘shatterproof’ school ones that’d last half a term if you were lucky.

This is a workman’s ruler, a joiner’s ruler.  But here’s the strange thing; it’s quite small, especially in the context of putting up buildings and extensions and making tables. Which leads me to concur, simply, that this ruler is a tool for those who want to make things well.

Those who leave nothing to chance.

Those who measure twice, and cut once.

This is a ruler for the artisans who are artists.