There are many better places to read about the new Amazon Dash button, launched yesterday. One such place is Matt Webb’s excellent (and as he calls them) ‘raw’ thoughts on what it means from an IoT perspective. And he should know. 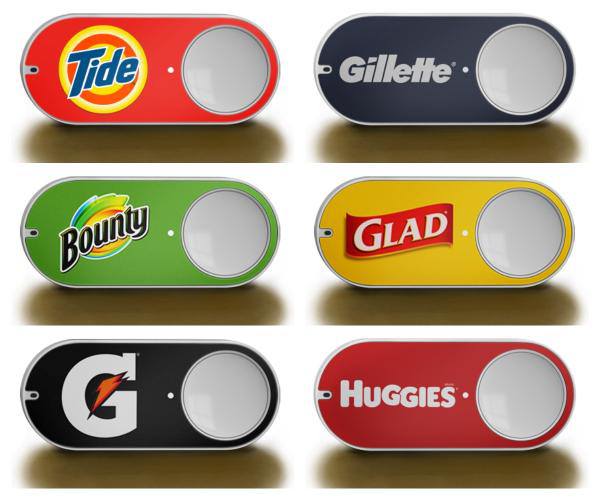 One sentence in Matt’s piece made me sit up though… “You’re a loyal Tide customer, but you’ve run out“…

Loyalty does seem to be the presumption in the launch campaign for Dash; that people have a firm favourite (not even just a fixed repertoire) amongst the countless toilet rolls, washing up liquids, soaps and cereals they stock their homes with.

Loyalty. A big word, with an ironically fickle fan base.


How Brands Grow : A summary of Byron Sharp’s book on what marketers don’t know from Amie Weller
And there’s a longer list of other brilliant viewpoints on it (read Martin Weigel on it, perhaps, over here).
Yet the launch of Amazon Dash seems predicated on the existence of brand loyalty.
So here’s an open question:
How many brands are you certain enough about to stick a button to your wall for? Think about the last shopping basket you filled, or Ocado order you received. What in there is a permanent fixture? What will you always buy to the exclusion of anything else?
What brand would you nail to a wall with the same conviction that you’d put up a picture in your house?
Dash makes a lot of sense from Amazon’s point of view, clearly. Whooo, go supply-chain monopoly!
And it may even make sense to FMCG marketers who believe they have a hard-core of “brand loyalists” out there, somewhere, who’ll choose their Dash button over a rivals.
(There’s actually a whole other conversation to have on whether you need an Ariel button by the washing machine, or a P&G button, but that’s for another day).
But with what the evidence and understanding of how it seems now that brands have worked, that doesn’t seem like the Amazon Dash idea of ‘loyalty’ is all they make it out to be.
It does give rise to an interesting set of questions though.
If we suppose for a minute that brand loyalty isn’t a thing, could we also argue that it’s because the infrastructure hasn’t existed to make it a thing.
After all, building loyalty in supermarket aisles by running TV ads and putting up posters is doomed to failure becuase of all the stoopid consumers who always forget what craft and joy you put into your ad, right?
Loyalty would probably be a brilliant strategy if everyone used shopping algorithms.
However, is it possible that things like Amazon Dash will create a world where brand loyalty actually means something, because the infrastructure connecting people to needs is so different?
Or, alternatively, are we going to see a short-term future in which people stick three Dash buttons on the washing machine, and use the website to check prices on the cheapest before pressing?
Hmmmmm…
Oh, and those brand stickers – they’re crying out to be screens in two years time. Which could mean adverts, and competition for space, and doom for FMCG brands.
Reckon, reckon, reckon… and relax.

9 Replies to “Slap Dash: quick reactions to the Amazon Button”