Catching up? You should read the overview to learn about the background to this… we’ll wait for you, promise.

I don’t know who my favourite band are, or what my favourite film is. I can tell you about lots of music and films and directors and albums that I love, but they leapfrog over each other as time, circumstances and context all change.

I can tell you though, with a great degree of certainty, that the late Iain Banks is my favourite author. Or should I say Iain M. Banks, as (if pushed to decide) I prefer his science fiction writing over his (un)normal fiction. Without turning this into a massive exploration on the universe he created with the Culture novels specifically, I would like to draw you attention to one book in particular; The Player of Games.

A short description, from here:

The Culture – a human/machine symbiotic society – has thrown up many great Game Players, and one of the greatest is Gurgeh. Jernau Morat Gurgeh. The Player of Games. Master of every board, computer and strategy. Bored with success, Gurgeh travels to the Empire of Azad, cruel and incredibly wealthy, to try their fabulous game … a game so complex, so like life itself, that the winner becomes Emperor.

I have been fascinated by this idea for a while; a game that represents a whole system, or organisation, so that the way that you play it means you fare well within the society for which the game is representative.

…indeed, once upon a time, when first starting Smithery, Mr Alex Fleetwood and I pitched an idea to a large FMCG company to design a game that they could use for recruitment of the right sort of new people. They didn’t go for it, it wasn’t really what they were expecting, I don’t think…

In the book, the word ‘Azad’ translates to mean “machine” or “system”. And as Vijay pointed out to me there’s also a Hindi / Persian word ‘azād’ which translates as “free”. Which is actually on some level, quite the opposite of the meaning in the book; those playing the game, which is everyone in the Empire, is trapped by it.

We are now approaching the part of the blog post where we could endlessly investigate the differences between ‘play’ and ‘games’. This is neither the time nor the place, and there are infinitely better qualified people than me thinking and writing about this.

Somewhere between ‘systems’ and ‘freedom’, between ‘play’ and ‘games’, I think there’s a rich fertile space for introducing more playful, gameful, systemized freedom into organisations.

And since this idea of AZAD won’t leave me, it’s be bubbling for years, so the only rational course of action is to play it out as a Smithery project this year.

As a starting point, we’ll look to play with the practice, to use the axes as defined in the last post as a starting idea, where a series of chance encounters and strategic decisions help groups of people play around with the language and actions as they become apparent to them.

Over Christmas, as I mentioned before, there was a wee boardgame version we created at home just for fun, to see what happened with a two-dimensional game that was a mix of choices, events and outcomes. 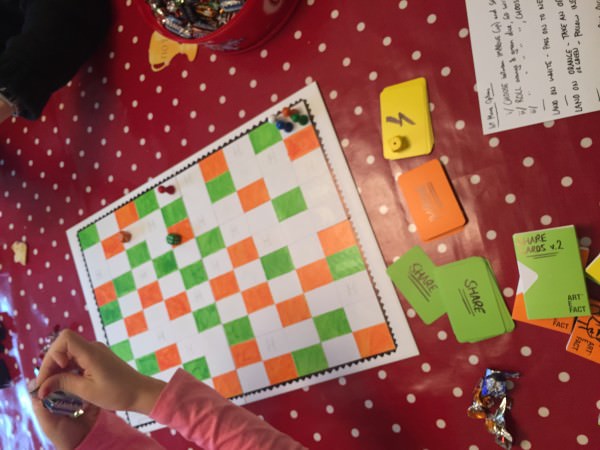 When thinking about it more though, I think there are interesting different ways to think about truning it into a real thing, at different levels of complexity and required time. So whereas there might be a ‘board game’ version (fully immersive, for teams), there could also be a simple nine square version, more akin to noughts and crosses perhaps, and even maybe a ‘back of the car’ version, where it just becomes about language and environment, and you don’t need anything else at all.

With all that in mind, let’s set the goals for project 2…

WBB (Why Bloody Bother?) “Playing With Ideas” works when designing workshops, one-off experiences, and so on. But it feels like there’s scope to go further, to set up systems and games people can use themselves to be more productive…

WDG (Woolly, Do-able Goal) Work up three general versions of this so that other people can pick them up and use them without us being there to scaffold them into it. And make a version of one of them to sell to folks, either crowd-funded or direct.