Ah, the famous annual Smithery projects. Well, famous might be pushing it, let’s go with ‘the thing that we do at the start of each year’. 2012 was about Making, 2013 was about Media, and 2014 was about Playing With Ideas, which in hindsight remained gloriously ill-defined but gave rise to August’s Culture Matrix malarkey, so we’ll let it off.

There have been various shifts in the Smithery universe in the last six months, detailed in the Smithery at Scale post mostly, but the tl;dr version is working with beloved partners (Mr Earls, Adaptive Lab, Gravity Road) to deliver awesome things, and the Smithery studio now being two, myself and Fraser. It’s a bit like the Sith, with less hoods and better coffee.

We sat down yesterday, and I’d explained the previous annual projects and the intention behind them, and decided what we wanted to achieve this year. We’ll cover each in more detail in a separate post, but this will give you an idea of how the 2015 projects will hang together. 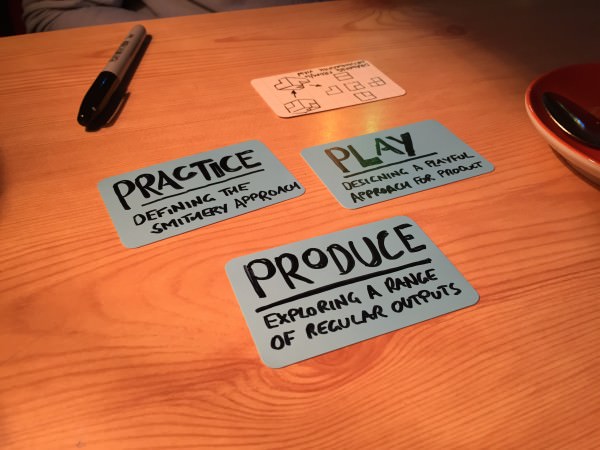 Ever since I did an interview with a German magazine, PAGE, in which they referred to Smithery as a “one-man studio”, that’s what I’ve stuck to as a description. Studio. It sounds like a place, despite running as a pick-up-and-play office for most of the last three years.

But from Autumn onwards, Fraser and I have been operating out of the top floor of the Gravity Road office at the top of Carnaby Street. Having a bit of actual space has made me realise that it is not the space that defines Smithery, but the approach. The practice of working.

That practice, since the Culture Matrix work, has refined itself into being a rudimentary diagram, defining the interplay between People and Things. It’s a partial reworking of the Culture Matrix itself, simplified by the assumptions that:

i) You start bottom left, and move up through to top right (conventional economic chartage, essentially)

ii) Everything you do starts on the diagram somewhere, and it becomes about where you go after that defines the work you need to do.

Over the last couple of months, we’ve been using the basic framework a lot, without really knowing exactly what the underlying principles are, and how to use them. But sketching out examples this week has made me see there’s a definte reasoning behind the idea… we just have to properly define it. 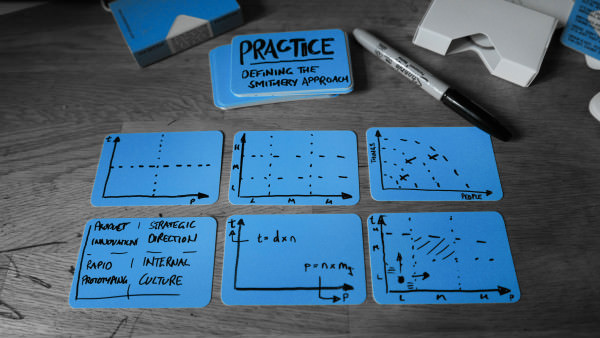 Who’s it for? It’s a project that is very much for ourselves and clients we work with. Even then, I’m not sure if it’s something we’ll teach in its entirety to clients, maybe just the basic operating principles, and the specific relevant section of the map. It’s a shared language of practise, of habit, for ourselves at Smithery.

Back in August, it occurred that the Culture Matrix looked like a game, and that there might be a winning position to get to on the ‘board’. I backtracked from that at the time, because I didn’t really know how to express that properly, but it’s been playing in my mind since.

I’ve been really interested in using playful things and approaches to pull interesting, better ideas from people in work for a good eight years now, mainly because of all of the benefits that come with it. In short, if people feel like they’re playing, barriers drop, anything becomes possible, and people will try things again and again. Playfulness comes with its own special energy.

I wanted to explore the matrix in terms of a game, of playfulness. So over Christmas, I took a blank board game board (I know, such things exist!), and drew out a very primitive version of a game to play with family and friends. It became a game about “inventing”. You’d to start with a new invention, and then decide what to do with it; improve it, or share it. That’d move you up the board, where various calamities would befall you. My son and I stripped all the sensible things out of it and made up random things (Viking Attack! Show It To A Vampire!) that would happen to you. 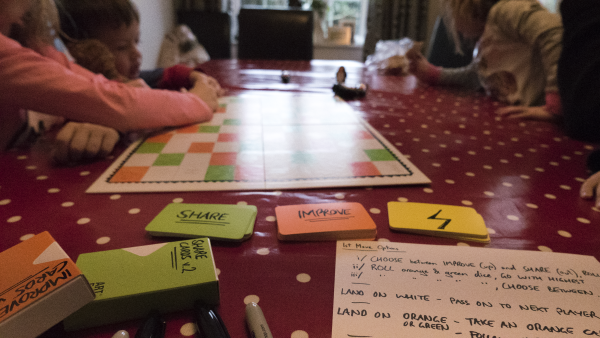 We’d play, refine some rules, try different things… just exploring how the principle of playing something across a territory as defined by the Culture Matrix might work. In short, if you can hold the attention of a group of 5-7 year olds and their parents with a game, you might just have a mechanic that will work for everyone.

Who’s it for? This could be friends, partners, customers… we’ll see as we go. The core idea is to explore whether we can create versions of the complex Culture Matrix that anyone can pick up and play with, and find useful outputs from.

Thirdly, we feel that we should produce more, and produce regularly. Fraser talked about this being the first year proper that he’s been out of full-time education, and so he felt it was important to keep producing things that he didn’t necessarily know how to do when setting out.

Of course, Sennett’s “Making Is Thinking” tenet from The Craftsman gets a very regular outing at Smithery (maybe we should start calling it the ‘Sennett Tenet’…), linking together the different elements of the work we do (Strategy, Design, Product, Comms, Org change… we kind of gave up keeping track, because it didn’t seem relevent any more).

In 2012, the Making theme yielded the Artefact Cards, of course, which have gone from strength to strength… but the more something like that grows, the more it becomes less about making and more about managing. So making sure we keep the making habit up is something that Fraser will be leading on, fusing his industrial design background with the other things we do.

Onwards then… we’ll detail out more about each project in separate posts in the coming days. Happy 2015, everyone.