Ok, so I was quite taken with the whole Flow Engine thing. Engines are useful things, after all. So I’ve made a Question Engine.

Yesterday morning in the post I received my paper copy of Dan Hill’s “Dark Matter and Trojan Horses: A Strategic Design Vocabulary“. It’s something that I have as an ebook, in my Kindle app on iPad mini, but I realised that it hadn’t made it into either the Book Matrix when I built it, or indeed specifically in my thinking around the Culture Matrix this far. Well, consciously at any rate. And yet one of the pages Dan showed in the new printed version featured two very familiar models; the civilisation and building layers from Stewart Brand’s Clock Of The Long Now and How Buildings Learn: 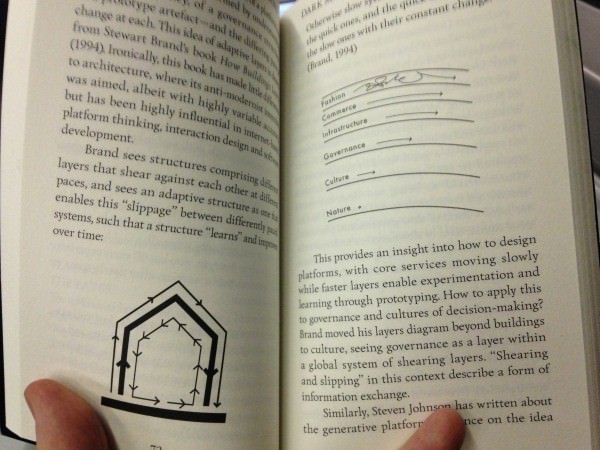 I wonder if I’d seen them before Rob and Alex separately told me about both this summer?

If so, it’s another great example about the importance of context; perhaps I’d seen these models before but the time and surroundings weren’t right to make them notable. Fast forward a year or two, and suddenly they help unlock a bigger puzzle.

I saw Dan talk earlier this summer, as it happens, at one of James Bridle’s Right To Flight events in a Peckham Car Park. As part of the talk, he reiterated the importance of asking the right question, which leafing to the end of the book now I can see again, so I’d like to quickly quote:

“As opposed to engineering, with its focus on problem solving, strategic design is focussed on questioning the question, reframing if necessary…”

Given my focus in these last few blog posts of the project on making useful things, I thought I’d use this inspiration to tackle the “questions for Indicator Events” idea. What sort of other questions (beyond the simple four yesterday) might you use to tackle things that you come across inside a working culture?

Now, I’ve been back through a fair few different posts and versions of things I’ve made this month, and realised just how many questions I’ve actually framed and asked; it’d make a terribly dry and dull list. So instead, with a little help from a WordPress widget called mg Quotes I’ve built a Question Engine.

It sounds grand. It’s basically a webpage. But what it does do is rotate, at random, a reworked form of every question I’ve asked as part of the Culture Matrix project, and serve them up three at a time for you as little provocations for you. Then just refresh the page, and get three more: 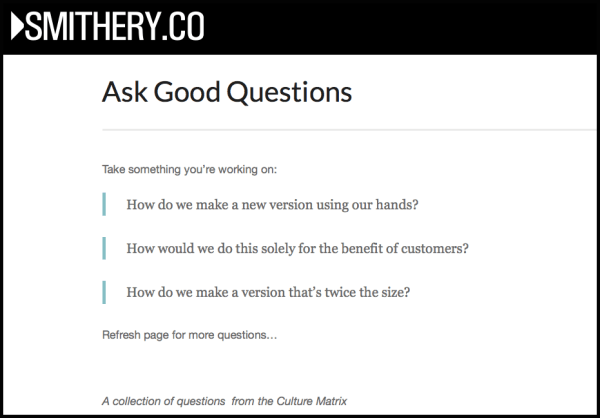 It means you can use it on phones, tablets, computers… anything you like, fairly easily. It also means, because it’s not an app, that I can keep adding things in there, as a resource of questions for myself when working on projects.

I’d love to hear from you, if you give it a wee try. Let me know how you get on.