“You know that what you need to do is possible to do, even though difficult, and sense of time disappears. You forget yourself. You feel part of something larger.”

At Laptops & Looms, quite a few folks alluded to the sensation of flow that we can get when working. It’s the feeling you get when you become so involved in the task at hand that you just keep operating to the very limit of your abilities (if not beyond).

Whilst I was looking around, I wondered if a flow state is something that can be quickly accessed if you have something that occupies both your hands and eyes.

I’d taken some test versions of the new Artefact Cards up, just to watch people using them and see what they did with them. Some folk (myself included) took notes of interesting things from the talks, some people used them for quickly constructed talks, and some people used them as a device to aid listening by drawing as they did it… as an example, here’s one of Alice’s cards: 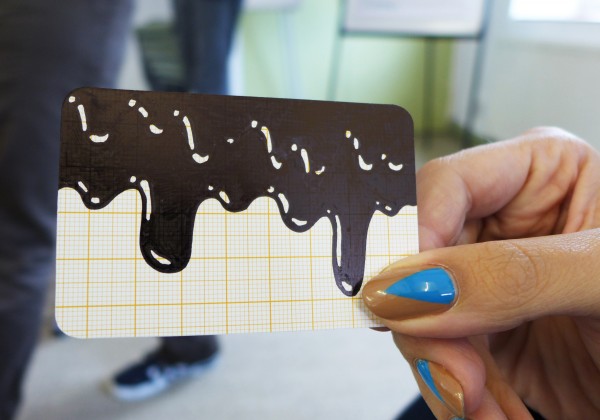 (Interesting aside – doodling has been show to actually aid recall of what people are listening to – read this article from Time here – basically it works because “when you doodle, you don’t daydream“.)

Anyway, all these uses I observed suggested a focussed mindset in the people I saw using them, and twinned with the recurring flow mentions, made me quickly write down an idea – “Flow Engines – Anything That Occupies Both Hands And The Eyes“.

Now that I’m back in the real world, I can dig a little more into what helps trigger flow, and perhaps set some guidelines for designing a Flow Engine, which I might describe for now as ‘something that can turn creative energy into useful motion‘, an explanation I’ve nicked from the Wikipedia description for ‘engine’.


I found an interesting series of links through to Steven Kotler’s The Rise of Superman: Decoding The Science of Ultimate Human Performance. There is something questionable about the choice of title, I think. It’s a bit creepy. However, reading around the reviews, explanations, slide decks and so on, the book looks at how top athletes in more alternative sports (surfing, snowboarding, skateboarding) access a state of mind that allows them to ride the biggest waves and so on.

Kotler presents 17 Flow Triggers (yep, seventeen) that athletes can regularly produce around themselves in order to get into the flow state; 3 Environmental, 4 Psycholological, 9 Social and 1 Creative.

The ‘Social’ ones are about creating more group flow, and I’m going to leave that for now. And the ‘Creativity’ one seems to imply… well, I don’t know, that some people are better at linking ideas and taking risks than others or something. It seems a bit of an add-on. However the Environmental and Psychological ones are really useful for exploring how you might make a Flow Engine.

For the purposes of today, I’m just exploring the three Environmental triggers:

1. High Consequences – Helps us focus on the important task looming

We don’t need to concentrate extra hard in order to get motivated; there are some external factors making us divert all of our creative energy to the task. In workshops, for instance, I think it helps to just play with time as a consequence – “you’ve got thirty minutes to do this, then you’ll present it to everyone else”. So you set up a scenario for a Flow Engine based on High Consequences; a combination of the task to be done, the space to do it in, and the time people have.

By giving people something new, something unexpected, or something that requires their own interpretation of it, you’re much less likely to get people going through the motions of something they know how to do. They’ll either have to incorporate and design a reaction to new information, or stretch themselves to connect across the unexpected twists, or just raise their own game when it comes to seeing through the complexity. In hindsight, it’s probably why the card games for workshops approach works, because it does all three things at once. The particular inputs are as important as the scenario you set for the Flow Engine.

3. Deep Embodiment – Total physical awareness of being ‘in’ the task

This is the one I might have observed with the Artefact Cards – that sense of something demanding more than just your brain, or fingers on glass. In a post over here, Kotler quotes professional kayaker Doug Ammons – “Action and adventure sports demand deep embodiment… Big rivers accelerate you in every direction at once. This puts the vestibular system into overdrive. This isn’t just your mind paying more attention—suddenly your entire body is paying attention.” What might be most important for a Flow Engine is way you get someone’s whole body paying attention to the task, especially when it comes to them laying aside devices which may distract from the task.

This approach for designing a Flow Engine is something I’ll try out over the next few days when designing the exercises around the Culture Matrix. It occurs to me that they will be useful for using in the Matrix, and more broadly for setting up things to do in the wider organisation as you diagnose issues.

ACTION 25: DESIGN YOURSELF A FLOW ENGINE, BASED ON HOW YOU WORK AT YOUR BEST

ACTION 25: HOW WOULD YOU DESIGN A FLOW ENGINE FOR YOURSELF?