I’ve just finished reading back through every post and comment so far of the twenty-three posts preceding this one. I’ve a good feeling now for what I think I’m doing, which to be honest is a surprise given where I was two hours ago (tired, lost, etc). I now have a stockpile of Artefact Cards which I’m shuffling around, thinking about a structure…

If I had to react instantly, to talk about it to someone right now, this is what I’d say…

The Culture Matrix is a way of describing, then changing, the environment in which an organisation makes things people want. The purpose of the matrix is to start with people, and the things you do for them, rather than starting with the spaces in which you currently operate. By leading with the customer, rather than the space, you can Make Things People Want rather than Making People Want Things.

As an approach, the Culture Matrix is a series of sequential exercises, simple at first, then advancing through a range of different provocations, to draw out a physical map of the organisation. It starts by interrogating both the work your people do, and the spaces in which they do it, in order to deliver for your customers or users.

From this, we can create a series of key Indicator Events, stories that have wider implications for the way the business is currently orientated. By testing these against customers, then identifying, designing and making changes that can benefit both business and customer alike, you can quickly change how you work in a way that works for everyone.

It’s just typed out off some of the cards, really, but it’s starting to become a good frame for what MTPW>MPWT means in practice, I think. 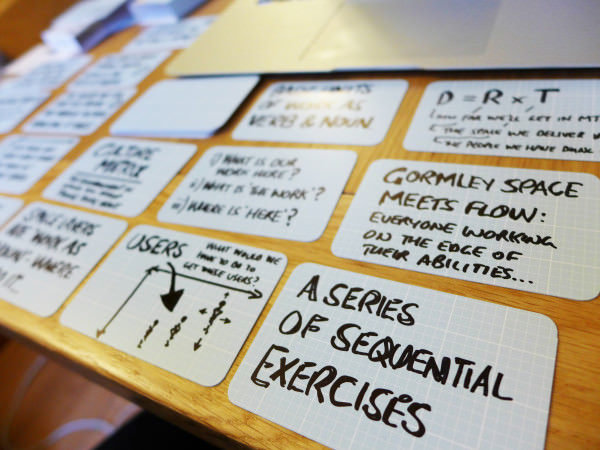 It’s also starting to get me thinking about some of the crunchier things I should hope to finish off by next Sunday (eeek, one week to go).

I’d also like to design all of this with this idea that’s been rattling around in my head since Laptops and Looms about Flow Engines – ways in which you can get people into flow states as quickly as possible.

“Flow is being completely involved in an activity for its own sake. The ego falls away. Time flies. Every action, movement, and thought follows inevitably from the previous one, like playing jazz. Your whole being is involved, and you’re using your skills to the utmost.”

That’s one to expand on tomorrow, though…

ACTION 24: IF YOU HAD TO PITCH SOMETHING TOMORROW THAT’S NOT READY, HOW WOULD YOU DO IT?