I’ve returned from Laptops & Looms. I’ll write more about it when this project is done, but various talks and conversations here have infused my thinking on this, none more so that something Tom Armitage said earlier today.

Tom was talking about making music stompboxes (from various open source designs), and how he was beginning to take some of these skills and apply them to working scenarios; making pedals and other input devices to use alongside the computer keyboard.

As one of his final three thinks at the end of the talk, he said he’d take making instruments over tools any time.

An instrument has many use cases, it’s something to play with, to improvise with.

I started thinking about the Culture Matrix. It’s not a tool, it’s far too complex for that, I think. And in hindsight, many of the conversations I’ve had over the last few days about it (with Matt, Brett, Frankie, Henry, Louise and others), casually testing it out, made me realise the complexity of it was a barrier. Also, I had a great email conversation with Steve after he’d been following the project posts, about the labels I’d been giving lately to the layers of the matrix. All this has been churning around, but it’s the ‘instrument’ point that brought it together.

I’ve been getting too prescriptive, basically. Because people think of their own experiences of how organisations work, if the labels doesn’t chime, they start picking at the labels (rightly, I think) rather than playing in the space.

If anything, I’ve been aiming for the wrong sort of instrument. The Wikipedia definition of ‘instrument’ is “a device used to determine the present value of quantity under measurement“.

Yet it’s more useful to view it like a musical instrument. How can you teach people how it works, simply, so they can get a few interesting notes out of it? Maybe a tune or two? Then as they practice more, they can learn increasingly complex compositions. It also becomes something upon which you can play freely, improvise, try things. You are not hemmed in by someone else’s tune. I’ve been playing people a particular song, when I should have been giving them an instrument to play something with.

So, how can I get to that? Well, on both the PEOPLE and the SPACE axes, the point is that they move fast to slow. That’s the way to understand the instrument from first principles. I think I have to find a simple, intuitive way in to that. 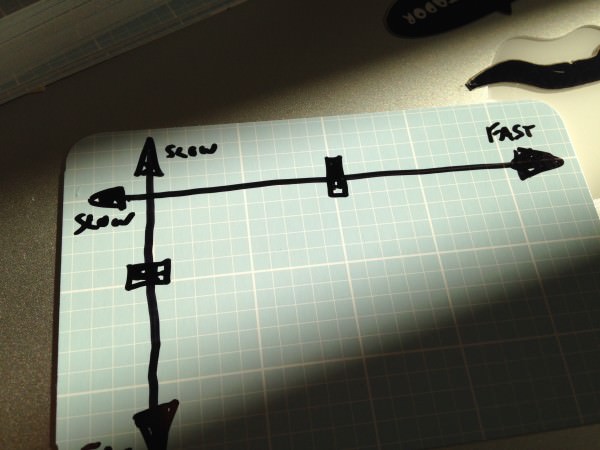 ACTION 23 – CATEGORISE YOUR OWN WORK; THE PEOPLE YOU DO IT WITH, THE SPACE YOU DO IT IN, FAST TO SLOW.