It’s a Sunday. A day of rest? No, but a day of less intensive prodding at this project. It’s the WEEKEND, people.

Right now, I’m sitting here about to dive into some things; flicking through books, skimming links, reflecting on projects… you know, soaking things up.

Bryan Boyer’s piece on Medium about ‘Secluded Innovation’ – really fascinating when thinking about the ‘Culture Bridge’ idea, around how much of the culture surrounding your company you should let in – “Those druids can do what they want because they do it behind closed doors with little or no interaction with a mass audience. They’re not trying to be part of popular culture”.


Paul Ford’s excellent piece on ‘The American Room’ (also on Medium) – He’s analysed US interior decor by looking at the YouTube videos of the last decade – “All of their frolic is bounded by a set of conventions that are essentially invisible yet define our national physical and technological architecture. Their dancing, talking bodies are the only non-standardized things in the videos.” – I’m wondering what the workspace equivalent is?

Neil Williams of GDS talking about their Roadmapping experiments (on Mind The Product) – loads of good stuff in here – “Good products are made by good teams. Good teams need space to work, and to have ownership of identifying the problems within their domain and solving them creatively.” – I always think on GDS as having built themselves a paper version of the UK internet to live inside. Perhaps not unlike the little guys who lived in that fella’s head in the Numskulls comic strip in the Beezer/Beano: 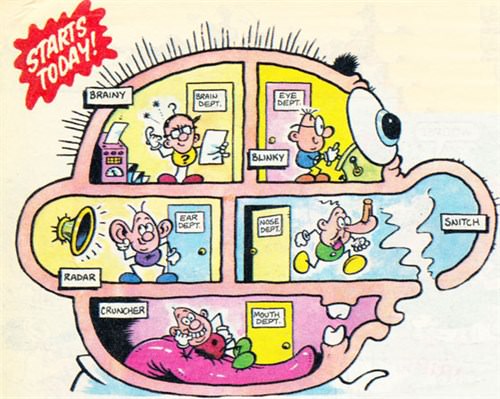 That Famous Valve Employees handbook, but especially the part about the desks on wheels (p6) – “Think of those wheels as a symbolic reminder that you should always be considering where you could move yourself to be more valuable. But also think of those wheels as literal wheels, because that’s what they are, and you’ll be able to actually move your desk with them.”

John Maeda’s Leadership Map – a great video of the man himself explaining it.

I’m also revisiting the piece I wrote a while ago on using Artefact Cards to design card games for ideas – “your aim in designing the exercises is to find ways in which people can take and combine different elements that they’ve generated before, and use them together to form new ideas”

Then there’s a few new books that have arrived / will arrive:

The Alliance by Reid Hoffman (suggested by Jim Meredith)

More books will arrive as well, as all these recommendations keep coming in, which gave me an idea I may try at some point soon.

I’m going to unpack my bookshelves, and in the middle of the office try to build a version of the matrix from the subject matter of the books I have. It might not work, but I’m hoping it may suggest things to me as I do it, and as I stand back to look upon it when I’m done.

ACTION 10 – MAP OUT THINGS YOU’VE DONE OR OWN IN A CRUDE MAP. WHAT PATTERNS CAN YOU SPOT?

PREVIOUSLY – Why? What If? How?