We’re on day eight, the start of week two.

As a result of yesterday’s review, I’ve made several changes to the Relativity Matrix, the first being I’ve decided that “The Relativity Matrix” is a good enough working title for it, but it is definitely up for review when I find out what it’s most useful for, and how it’s used by people.

Is it a map? Is it a game? A scenario planner? A set of cards? All of these things?

The next is in the PEOPLE layers, switching ‘Marketing’ to ‘Customer’. Various reasons for this, but the most important two are:

i) you’ve got to be able to see where the customer sits within your organisation, so having them overtly in the map helps you do that. It’s also what proper marketing is; ‘make the business do what the customer wants’.

ii) I keep having to explain to people what I don’t mean by marketing, because of the terrible things done in the name of marketing which has been growing stronger in culture probably since Bill Hicks. Marketing as a discipline has a massive perception problem, which is grimly hilarious when you think about it.

Next, an overhaul of the SPACE layers, in keeping with Scott’s point about both the SPACE & PEOPLE layers having some sort of symmetry as they move from slowest to fastest. I’d built upon Stewart Brand’s original layers to get the previous, but I like these new ones (that Scott Smith suggested) better; Surroundings, Structure, Infrastructure, Services, Materials.

It also picks up on the rise of things like cloud services (which didn’t exist when How Buildings Learn was written) to show how quickly new services can be added (as long as you have the infrastructure to sit them upon; no point getting massive cloud storage if you’ve got a crap broadband connection, for instance).

Slight tangent; ages ago, when I was at PHD I think, I started differentiating between work as a verb, and as a noun; it was a thing you did, and the place you went to do it.

Increasingly, I found it hard to do the verb by going to the noun in that conventional “this is my workspace” way. Thinking about the PEOPLE layers as ‘the things you do’, and the SPACE layers as ‘the places I do them in’ is useful short-hand, perhaps.

But to what end?

Well, I wonder if it’s about asking good questions, around issues that an organisation has, in all of the different layers…

For instance, some examples of the sorts of things you might ask, based around a part-hypothetical / part-client issue:

CULTURE –  Why does a company have a low ‘volunteer margin’?  i.e. nobody really steps up when there’s a new project outside standard job descriptions.

LEADERSHIP – How might you create an experiment, or platform, which is a place where people might step up? Is it a different reality, hidden in plain sight?

CUSTOMER – How can we see the sorts of customer needs that aren’t being met? Everyone is running around doing ‘business as usual’

COMMERCE – When’s the most profitable quarter to do things in? When is the organisation more likely to be able to invest in an experiment?

ACTIONS – How do we spot the likeliest candidates for pushing the company in a new direction? Is it in the way they approach their current day-to-day, or something else?

SURROUNDINGS – What resources from the nearby city can we draw upon? We’re not going anywhere, so how do we use what we have?

STRUCTURE – Do we have a room we can hijack? A floor we don’t use? A section of the breakout zone that we can take over? Where does this live?

INFRASTRUCTURE – What does it look like, and feel like when you work there? How do we mark it as a differentiated space?

SERVICES – What’s missing from the picture? Access to technology? Access to different people? How can we bring them in on top of our infrastructure?

It’s especially interesting if you then put two questions like this together… for example:

How can we investigate the sorts of customer needs that aren’t being met, by using a technology we currently don’t have?

When would the organisation be most likely to be able to invest in an experiment using what we find in the city around us?

Approaching it like this might also start to show us the sorts of hacks needed between the layers (that people do themselves, or can be suggested to help organisations).

And then we can look at the knock-on effects doing something in one place, can have on other parts of the business… 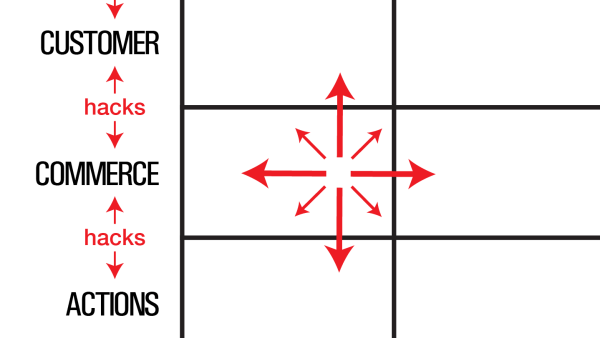 Right then, that’s got me excited.

I think my next step might be to generate a lot of questions, using a mix of past Smithery projects, and things I find around the internet (or that you send me, hint hint), to use practical examples to tease out the good questions to ask.

ACTION 08: DO SOMETHING NEW IN THE PLACE YOU ALWAYS WORK, OR GO SOMEWHERE YOU NEVER GO TO DO SOMETHING YOU DO REGULARLY.