I was delighted to put together a talk with Tracey Camilleri for today’s Innovation Stories 14 event about The Key To Leadership project we created last year (alongside Thomas Forsyth, Chris Thorpe and Fraser Hamilton) as part of the Oxford Strategic Leadership Programme at the Saïd Business School.

UPDATE: David Burton‘s done a terrific set of sketchnotes of the whole event, here’s the one for our talk: 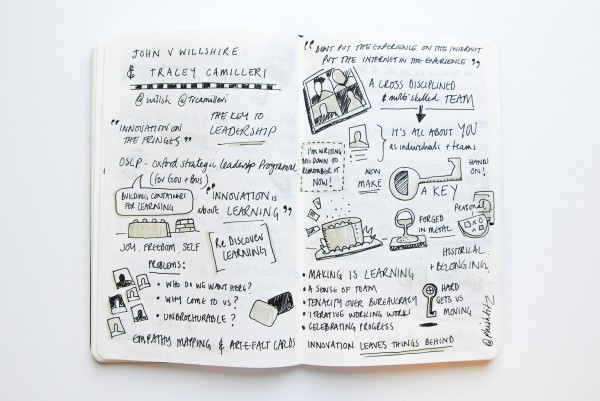 Also, check the Innovation Social site for links to other summaries of the day.

In reflecting on what had happened before, during and after the programme, we realised that so much of the project wasn’t a simple, straightforward interpretation of what we did at the time. When you look at it from distance, and the effect it’s had on other parts of the organisation, it’s something that had a set of a series of brilliant, if somewhat unintended, consequences.

It made us realise that innovation isn’t what you bring, it’s what you leave behind.

It’s the changes and differences you make to an organisation when you’re no longer there. The stuff that keeps creating value in your absence. The big things, yes, but also (and more importantly, perhaps) the little things. The things people will pick up and run with every day as they work on new things.

Our last point was that this makes innovation hard for traditional agency models to find a viable role for. If you’re there to deliver continued value over time (“we are here to do this for you”), as if it was an advertising campaign, then you’re not really leaving anything in the client organisation to make it stronger. Perhaps successful innovation demands a generousity of spirit, leaving as much as it can as continued catalyst, if it is to stick from the outside.

Anyway, here are our slides (with some added narration) if you want a little look. We had a tremendous time, thamks to Nadya Powell of Innovation Social for the invitation, and the rest of the brilliant speakers from whom we learned loads of things today too.

2 Replies to “Innovation isn’t what you bring, it’s what you leave behind”