Last week, I took delivery of my third pair of Hiut jeans.

Not long after I started Smithery, I saw David speak at Firestarters, and was compelled to buy a pair as soon as I could.  I got them in April 2012.  Then I bought another pair in January 2013.  And now I have a third pair.  It’s a bit daft, but I try to do all my work in Hiuts. 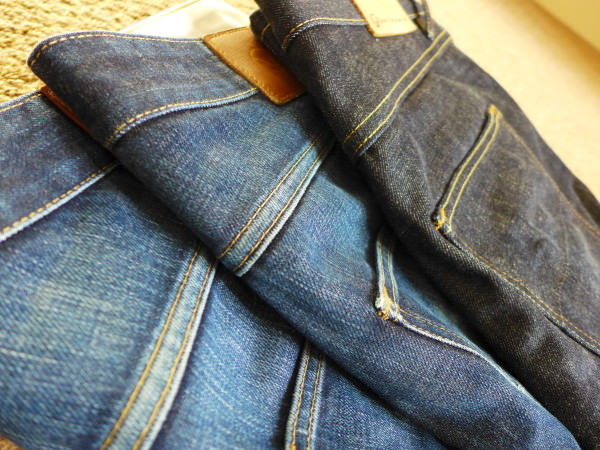 It helps to have three pairs, of course.  It’s quite nice having different ages of jeans too; when I had two pairs, they were ‘city Hiuts’ and ‘country Hiuts’.  Now I guess they’ll have to be Urban, Suburban & Rural or something.

Perhaps it’s subconsciously symbolic; maybe something about commiting to something for a long time, about something well made, about it being from people trying push at the boundaries of things.

Why can’t I subscribe to a car company?  Or to ten years of films from a director I like?  Running trainers every eighteen months?  Or 24 months worth of weekly basics supermarket shopping?

If we did that, would it let companies change?  Would they stop them shortcutting to quick profits, and banging people around the head with a BUY NOW message?  How would they demonstrate they’re worth staying with..?

Or are companies not equipped to deal with subscriptions like this?  Would everyone just become like a mobile provider, mercilessly extracting every bolt-on and upgrade they could from you until you’re had enough and leave?

3 Replies to “Always In Hiuts”