So then, following on from what Mr Howard may have called ‘the prologue‘… what did I learn from the three Smithery projects in 2013?

As with last year, here they are in the order I proposed them in, the original goal, what actually happened, and a grade.

1. The Sound of Smithery

In short: Investigate audio as a tool for fast turnaround of blogging ideas, or as ways to capture ‘in the moment pieces’ during projects.

WBB (Why Bloody Bother?) (from original post) Sound recording has always fascinated me, from being in Gamages Model Train Club and the like, and I’m curious to find out if making media in this way is something that’s pretty niche (making, listening, sharing), or if it has broader possibilities for people and companies.

WDG (Woolly, Doable Goal) Do a weekly “podcast” thing here on the blog, as a post, and see what people think, if people listen, and what they do as a result.

All in all, not too badly as a learning experience, but pretty terribly if we’re judging it by ‘do a weekly podcast’.  As a way to capture ideas for blogging, or even to capture ideas instead of blogging, a platform like Audiboo has proven itself to be pretty useful.

Record something into your phone, or through a microphone onto phone/tablet etc, and set it to not just automatically upload to the Audioboo site, but to cross-post into WordPress, Tumblr etc. It’s relatively quick and easy to do, and takes less worrying and editing than making videos. Doing them once, and live, seems to make it easier still.

For the first half of the year, I did quite a few that were just instead of (or to kick off) blog posts.  Andrew Sleigh at Lighthouse in Brighton referred to them as “Audiohunches”, which I liked a lot and so stuck – we talked about it here:

listen to ‘Artefact Cards & Audio Futures with @andrewsleigh’ on Audioboo

Occasionally, the audio post could be a marker for a blog post to be written, and I’d just expand on the audio after I’d though a bit more about it. Recording your voice (once you get past the weird self-conscious bit) is useful, as you sometimes discover what it is you think about things halfway through the sentence.

Then later on, I tried doing a series of daynotes for a week-long project at the Saïd Business School in Oxford, and again that proved to be useful, not just as a way of checking in on the project as we went, but listening back through the project afterwards to decide what to do (and not do) the second time we did it.

It’s worth noting that recently I’ve dropped off doing them.

I think I’ll do more again in 2014, and particularly for intensive projects to keep an update of what’s going on, but I don’t think it’ll ever turn into a weekly podcast thing. You never know, of course.

A word on technical stuff.  I tried a few different hardware setups to help the process.  Firstly, there’s a very simply trick Christian Payne taught me – get rid of the wind noise that affects the inbuilt microphone in your iPhone by simply using a standard microphone windshield, like this: 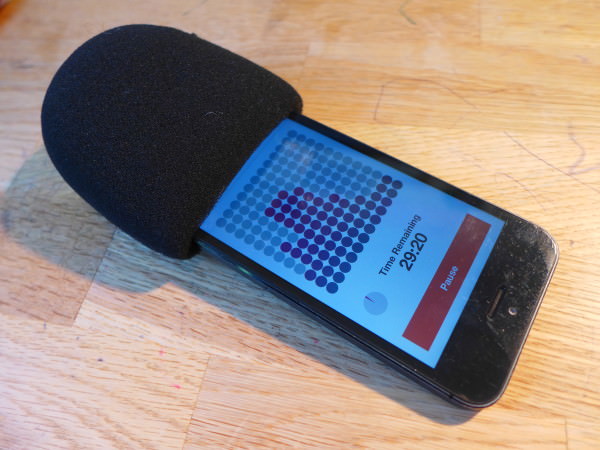 The built in iPhone mic is pretty good.  I did try a couple of other microphone things though.

Firstly, there was the Samson Meteor microphone, which I plugged into my iPad mini to do recordings (and more specifically interviews), as it gave a good 360 degree audio capture for more than one voice.  It’s got a very striking look too, which would possibly dissuade some folks.

I have had a couple of issues now and again, but that’s mainly been an LED bulb that’s stopped working so I don’t know if it’s on or not.

But the Meteor has been pretty good, and certainly a better than the MicW i266 I’ve tried out too.  I really want this mic to be amazing, as it’s a small, pocket-sized wonder, but the one I’ve got puts out a significant amount of noise and records things really quietly.  I’ve sending it back to see if it’s faulty, and if I get one back that works better, I’ll post up a wee reappraisal. 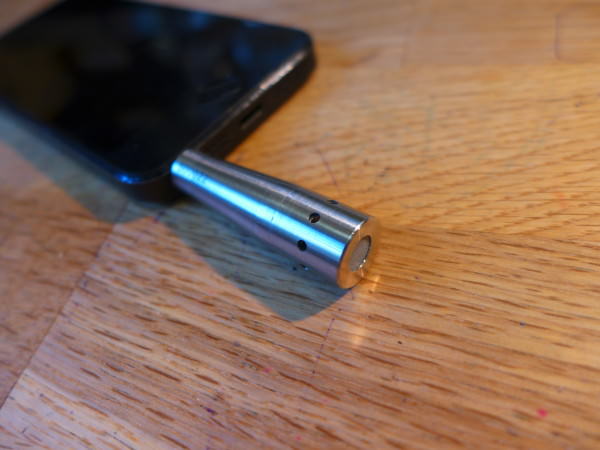 All in all though, the audio experiments have been a relative success, without being anything magnificently groundbreaking.  A useful way to augment things, but never really going to be the thing itself, perhaps.

GRADE: a solid, if unspectacular, B

2. View From The Desk


In short: Use a quickly hacked together top-down webcam camera to create videos quickly and simply.

WBB (Why Bloody Bother?) Because if I shoot more videos, and get into it, I’ll start to build up a better understanding of how small , inexpensive videos might be used in the future with the same regularity as written content and images might be now.

WDG (Woolly, Doable Goal) One video a week. Starting this week. With some time off for holidays and the like, let’s call it forty videos this year.

Well, once again the woolly doable goal remains unmet, but the project as a learning experience has been relatively useful.

I have done a few videos using the top-down camera hack (a webcam secured onto the end of an angle poise lamp frame with Sugru): 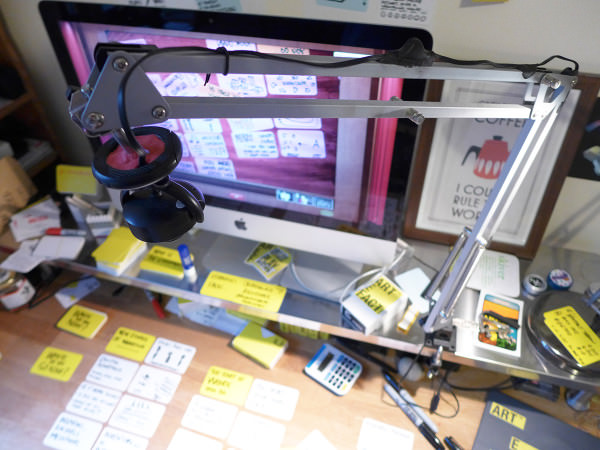 For instance, here’s the review I did for Mike Rohde’s Sketchnote Handbook:

But really that camera has been most useful as a second Skype camera for showing people various ideas on Artefact Cards – it presents a top-down view on the cards as I go through them, and has worked really well in working remotely with people.  It’s like having a plan view for your brain.

(If you use Artefact Cards, and want to have a go at making one, pop over here).

The camera I’ve made much more use of since buying it in August (which I’ve talked about before) is the tremendous Panasonic LX-7: 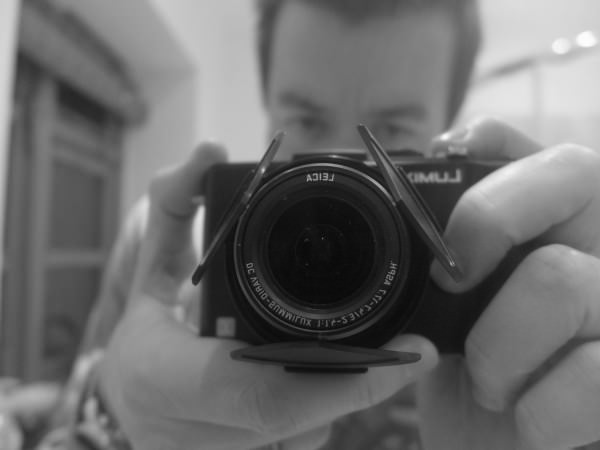 Basically it’s a high end-compact camera, and it was reviews like this one that made me think that it might be a handier informal project camera to have around than a proper DSLR.

It’s meant that going through projects that I can quite quickly capture and edit together videos which are good *enough* (to the point of the previous post, nowadays it doesn’t have to be great, it just has to be up).

So for instance, around the Saïd Business School project, I could shoot things through with the LX7 as we went, then spent a few hours one morning pulling together a project video:

It was also delightful to discover the slow motion video abilities of the LX7, especially after Anne Hollowday (creator of the brilliant film series The Makers Of Things) had suggested I try that way of shooting… it works very well indeed with molten brass, as you’ll see:

Just shooting stuff without really knowing why seems to be a valuable thing too.  On another project, I happened to be down at Lighthouse when Honor gave a group we’d brought in a quick 20 minute private view of the brilliant Immaterials show from this year.

I’d had the LX7 for a week or two, and just happened to shoot some slow motion footage of Honor.  It occurred a couple of weeks after that it’d make a great accompaniment to an Audio post I’d put up after dConstruct:

So, have I made 40 videos this year?  No.  But I’ve made about 20, perhaps, some public and some for client projects, a few using the methods I intended, but more useful ones when I figured out what I could do better.

That’s the thing, though, I guess; there’s no point spending all of your resources (time+money) on setting up to start.  Just start.  Do one, see what the limitatations and problems you have are, then solve them when you do a second.

GRADE: a fairly respectable B+, with room for improvement

3. Capturing the BitTorrent for Artefact Cards


In short: Create a platform to capture various uses of Artefact Cards, for users to share.

WBB (Why Bloody Bother?) Because introducing people to a new way of working, then leaving them on their own to figure it out seems, well, a bit on a 20th Century way to do things.

WDG (Woolly, Doable Goal)  I have absolutely no idea… let’s call it “three ways in which people can put in and take out from the communal pot”.  That’s super-woolly, innit?

Super-woolly?  Thankfully, yes.  There is no ‘communal pot’ on the grand scale here, despite 2013 being the ‘year of the platform‘.  That’s the sort of thing that takes a lot more resource than I could commit this year.

However, rather than a public platform for doing this, there is a platform of sorts.  This year, I was lucky enough (and I’m still not sure how) to work with Adam Hoyle and Darrell Whitelaw on the Artefact app for iOS. 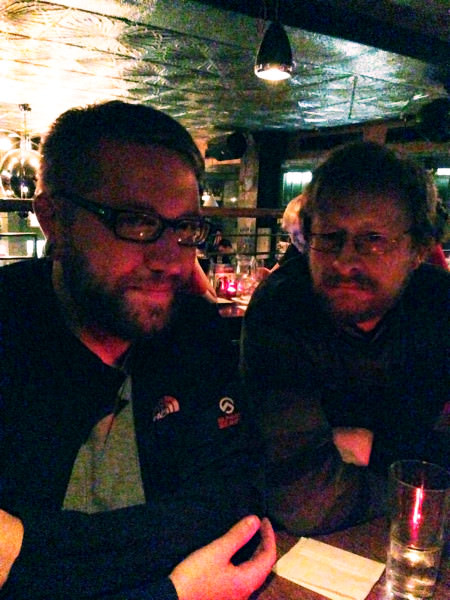 I’ve also just decided that together, Adam and Darrell might be tech’s equivalent of The Persuaders.  But with better beards.  I’d watch that show.

Anyway, the app does one thing well – it’s an easy way to take pictures of the cards you create (or anything else  for that matter), store them on your phone, reorder them whenever you like, and export them as a PDF, presentation or series of pictures:

It’s worked really well as a companion piece for the cards (have a play for free here, if you haven’t already), but at the moment there’s no broad platform for sharing cards and decks between users, as the original goal would demand.

But then again, perhaps there doesn’t need to be.  After all, the primary purpose is to share ideas you’re working on with people you’re working on them with, and there are plenty of existing ways to do that (email, shared drives, Basecamp or whatever).  There are some things (in fact a lot of things) that don’t need that sort of social platform, perhaps.

All in all, not a bad year.  Better grades than 2012 too.  The Daily Telegraph will write tomorrow that these exams are getting easier, no doubt…

What it has taught me after a second year of doing these projects, I get a lot out of them in various ways, but it’s really hard to set a meaningful goal.  There are too many variables.

Maybe for 2014 I should treat each project as immersion within a system, rather than a goal (as Neil talked about in a post earlier today).  And then judge success based on how deep in a given system I get to go.

I’ll think about that next week when I talk about the three projects for 2014.