You might remember, dear reader, that earlier this week I told you about this dialogic experiment I was doing with Contagious?  Yes?

Well, the first response piece to my original provocation has gone up, from Martin Weigel over at W+K in Amsterdam (Martin’s blog over the last year in particular has been a constant source of sharp inspiration and beautifully put common sense).

The following stuff will make sense once you’ve read Martin’s piece, and maybe the original if you haven’t already.

I’ll wait here for you.

Martin and I, after writing the pieces, shared an email exchange which we think helps further arguments, areas of interest and so on.

So with Martin’s permission I’m republishing that here, for your delectation, before finishing it off with a wee doodle I’m thinking about at the moment…

At 499 words, it’s certainly tested my ability to be concise.

The opening sentence probably sounds more snarky than I mean it to be…. Very happy to edit and be less of an asshole.

Let me know if this is what you were looking for!

I’ll tell you what is has made me think of, that continuity thing.

We use various ways to help us buy things with minimum fuss.  As you say, in the grand scheme of things, brands aren’t THAT important in our lives.

Two of those ways are continuity, and copying others.  If we see other people doing it, we think ‘yeah, it’s easier to presume they have it right’.

Perhaps there might be some form of trade-off between the two.  If you can create more social impressions of people using your product/service, other people will use that as a guiding factor.

The more interesting you can be, maybe, and as long as it’s related to people using your thing (as opposed to pointless social media cupcake malarkey), the less you need continuity.

I’d add distribution as the either means by which buying a brand is made easy.
Moran called all this the creation of physical and mental availability.
I’d call it marketing.
Though I suspect marketing has forgotten that.

All that said, here’s an uncomfortable thought.
For some.
Particularly the self-styled rockstars.
Innovation in advertising has never been led by the thinkers.
It’s been led by creatives (or makers) jumping on technological possibilities.
Thinkers are merely apologists, and publicists.
Creatives do it because it’s new.
We help them understand why it might just be right.
Discuss.
Hmm.
Feeling a post coming along….!

I was thinking about the distribution thing more today.  The distribution factor might be how the curve shifts up.  I need to explain it better.  Will do soon.

On the innovation in advertising point, I’m less comfortable with the divide of thinkers & makers than I ever have been.  I think perhaps a lot of it comes down to nurture in environments; because the two different divisions of “thinking” and “making” exist in agencies, we separate the two out when sometimes we shouldn’t.  I’m a big fan of the “making is thinking” argument, working on doing things helps you discover what’s going on, what you think about them.

I hear a lot of frustration from the grads on the Google Squared programme that in agencies they’re put in a box, and not allowed to operate outside it.  They can only work to the job description, not to what’s a more innovative and compelling course of action.

Maybe innovation in advertising is led by those up to their elbows in doing things?  Not just those thinking about things.  And I can think of plenty of examples of both types on traditional creative/planning axis.

I absolutely agree that we leant by doing.

I am also in favour of generalists.

And yet at the same time I endorse the importance (and benefits) of the division of labour.

But as the same time we do want people to excel at something.

I had this same discussion with Dave Trott. Who told me to look at page 150 of his book Predatory Thinking. It’s worth a read!

So I did draw out those payoff curves, as it happens, and they’ve been waiting on my wall for a month and a half to do something with.  Here they are: 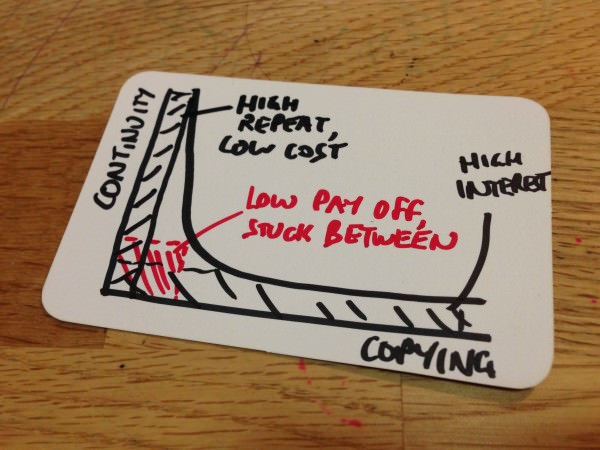 It’s still just a rudimentary idea, and full of the usual sweeping assumptions (that’s what teaching Economics to people who went to Uni to do English encourages).  But it is this…

You could choose continuity, and the road of minimum fuss.  Concentrate all your efforts on that, being highly repetitive at low-cost.  One easy-to-sell, consistent thing.  The pay-off is pretty sizable (the black rectangle up the y-axis).

Or, you could choose a route where you’re making loads of people engage, interested, and sharing your stuff.  It’s probably phenomenally expensive, experimental, really hit and miss.  It might even require you to do lots of experimental product stuff too, rather than one homogenous thing (heaven forfend!).

I guess you’d say (if you were that way inclined) that it’s the infamous ‘earned’ media; getting people to talk about you so you don’t need to buy media.

Copying each other, buying things from brands because ‘they look popular’ in whichever social waters you swim.

Graeme pointed out the other day that branding could arguably be a simple proxy for popularity, which is important to make it easy for people to choose you.

But if you go for it (really go for it), you’ll beat everyone else to the attention of the masses, and again, the payoff is considerable (the black rectangle along the x-axis).

And that’s probably true that you could do that no matter what sort of product you have (hello, rouge bovine energy drink).

But there are only ever a few winners in this space; it’s the far end of a bell-shaped curve.  Not everyone can do the exceptional; the clue is in the name.

The danger point, however, the place where you get little payoff, is in the middle.  A halfway house.  Not committing to either route specifically well, spending too much time and energy toying badly with trying to make a social splash, and not spending enough money or attention on doing continuity well.

You get stuck on that red rectangle in the middle as a result, a far worse payoff than either of the alternatives. The chances are then that you’ll be in a slump.

And when you’re in a Slump, you’re not in for much fun.
Un-slumping yourself is not easily done.

Finally in this model, perhaps distribution (being physically available) plays the most significant part; it’s how the curve shifts up. 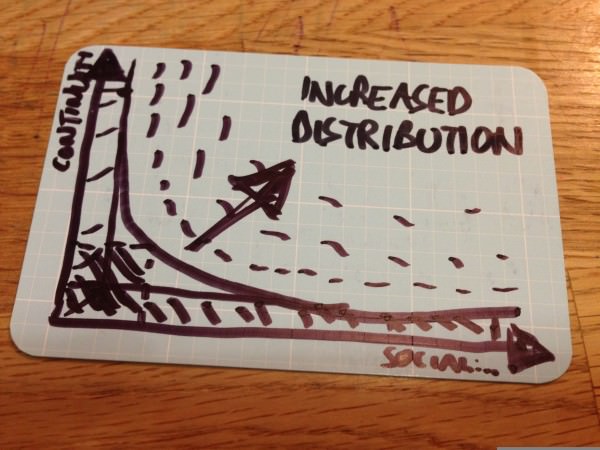 Distribution determines under all scenarios how much you’ll sell, and it may well be that you don’t need to give a hoot about where you are on the curve if your distribution is strong and defendable enough.

(how you make that happen is a whole other story)

Anyway, there we go, some more meat on the bones of the ongoing experiment.

This might also coincide with something else I’ve been thinking of recently – The Humdrum Conundrum: whether average FMCGs are becoming SDCGs – Slowly Dying Consumer Goods – but I need to work out if there’s truly an argument here rather than just a nifty title.

One Reply to “Continuity vs Copying: a dialogic conversation with Martin Weigel”