Seeing as this is my first blog post for The Smithery I think I’ll try to keep it short and sweet. When the idea for me to initially write this blog post was brought up John and I agreed that we would give out a free font at then end of the post but if you decide to read on you will soon realize that we couldn’t quite materialize that initial thought, yet.

I have been working on a new “Axminster” font over the last few weeks and we thought it may be time to release a trial version to get some feedback, as in our minds it isn’t quite right yet.

The whole idea started when someone commented to John on how they really liked the handwriting he used when writing on Artefact cards. Now I don’t think his handwriting would have one any prizes at school nor will John want his children to be imitating the font in the near future but there is certainly something very uniquely harsh when he writes with a Sharpie, which is pretty much every time he writes. 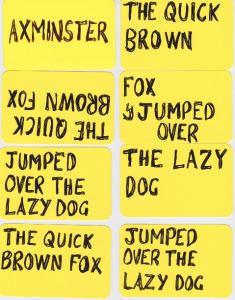 Initially we grouped his handwriting in to two categories (one with gaps and one without gaps) however upon seeing them both we decided to just go ahead with the gap font.

The main problem we had though is what happened when we had to edit John’s handwriting in order to make it available in digital format. It seemed to lose some of is rough edges and, dare I say it, looked more like Comic Sans’s upper case, older cousin (which is definitely not what we were aiming for).

The quick brown fox jumps over the lazy dog.

After a fair bit of fiddling about on Photoshop I realized that even if I didn’t change them to vectors before uploading them to the site we were using, the site itself automatically changed each letter into a vector, and that is where the problem lies.

So our next step (when I return from my holiday) is to trace the letters individually in order to maintain the roughness from John’s handwriting, which is really what we want. And this way it will be a handwritten handwriting font, which certainly has a nice ring to it.

So as much as I would love to say: ladies and gentlemen without further a due I give you the first version of the Axminster font, unfortunately we are all going to have to wait a wee bit longer.