I was sitting with Mark & Snowy earlier, talking about a wee project we’re plotting, and this thought crept up on me around “Wearable Tech”. 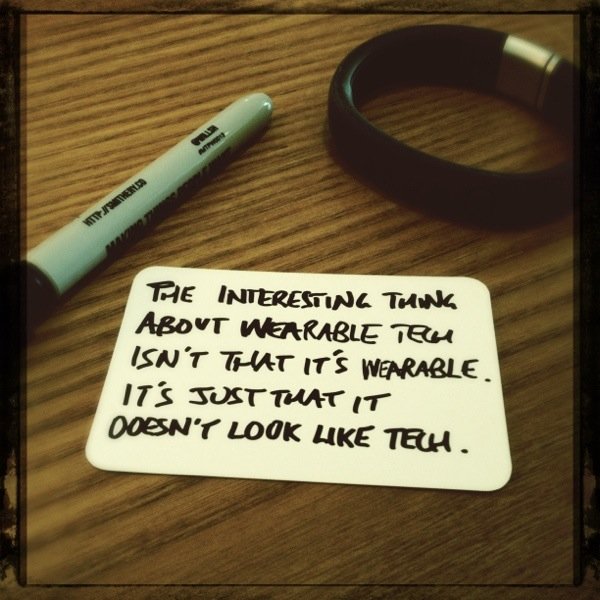 The line of thinking, in it’s very infancy of course, is this.

Everyone is making a smart watch. There’s FuelBands and FitBits everywhere you look. Google Glass is an interesting open experiment to watch develop. The are various smart clothes and fabrics that keep popping up every now and then.

But perhaps it’s not the fact that it’s wearable that makes it interesting, it’s just that ‘Wearable’ is a handy term to help categorise some of the interesting uses of technology we’re seeing.

I wonder if there might be a broader category of stuff that ‘wearable tech’ is a subset of though. The sorts of things I also think of as part often same wider category would be Good Night Lamp or Little Printer perhaps. Things that aren’t lots of pixels under glass, essentially, and encourage more use of our hands and the signals we can get from them in conjunction with other senses:

“Hands are the main structures for physically manipulating the environment, used for both gross motor skills (such as grasping a large object) and fine motor skills (such as picking up a small pebble). The fingertips contain some of the densest areas of nerve endings on the body, are the richest source of tactile feedback, and have the greatest positioning capability of the body; thus the sense of touch is intimately associated with hands.”

I don’t know exactly what it is yet, but the working title might be ‘Full Manual Tech’ – devices which are created to make the most of the feeling we get from both Gross Motor Skills and Fine Motor Skillls. Clicks and pushes and elaborate swooshes. The feeling of the world pushing back.