I was lucky enough to be at The Do Lectures Start Up the other weekend. There are many stories to be shared from that another day, especially around the ‘start up bit’.

But for now, I thought I’d share this – it’s my notes from the weekend’s speakers, which I captured on Artefact Cards rather than a notebook or device.

I was road-testing two things by capturing notes this way.

The first is a more robust, beautiful way of travelling around with the Artefact cards and using them spontaneously. I love the current boxes they come in now, I really do, but they’re just not pocket sized.

Whereas this little fella is just the job… 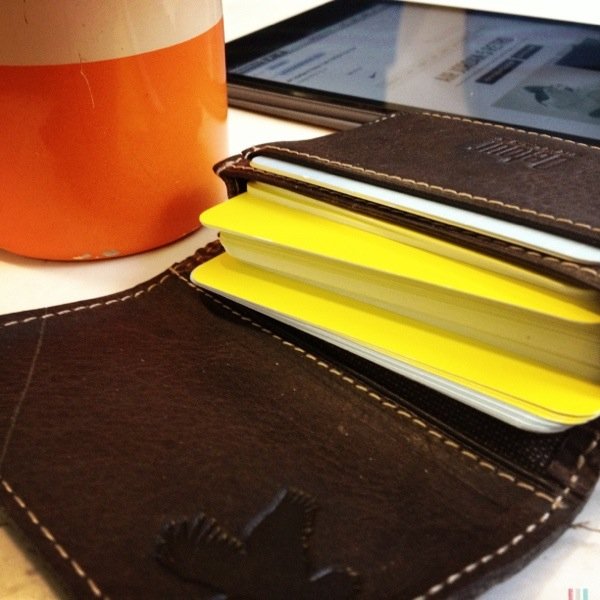 It’s ostensibly a leather business card wallet, made by Bernard Heathcote and his sons at Lichfield Leather. This is a style they already do, so in the spirit of “the Tony Stark school of building one quickly“, I just used the off the shelf solution to see how it worked out.

And it worked pretty well. The flap opens up to give you a little shelf to hold the card whilst you write on it…

…which proved massively helpful on a small wooden chair in a tent in Cardigan. If it works there, it’ll work anywhere.

Next steps on that are to work with Bernard to create an Artefact version specifically. I’d like to be able to do a limited run of them for the first birthday of Artefact in June.

The second thing I was testing was the Artefact app… Which is what I used to capture all the cards, rearrange them, and export them as a presentation to upload to Slideshare.

More on the app another day… It’s getting very close now, though.

One Reply to “The Do Lectures: notes from a field”