Tom Abba is Senior Lecturer in Narrative Theory at UWE, and has been using Artefact Cards since the second wave of testing.

Together with Circumstance, he’s been creating a project called These Pages Fall Like Ash where they are working with leading authors Nick Harkaway and Neil Gaiman to explore what the book, the editor and the author could be on a digital-first platform.

You can read more about that here, and follow the project as they go – http://www.react-hub.org.uk/books-and-print-sandbox/projects/2013/these-pages-fall-like-ash/

That happened. Except for everyone turning to look – only one of the panel did that.

I had an idea for this project over eighteen months ago and I’ve been trying to find to right opportunity to pitch it since then. It arose from an offhanded remark Adam Greenfield (https://twitter.com/agpublic) made on a walkshop in Bristol and grew from there.

It’s been drafted on the original (S logo) Artefact cards, and redrafted on the yellowbacked editions. It’s been expanded, contracted and expanded again to suit circumstances, and while it keeps changing, the ideas at the heart of it are always the same – audience-driven story, cities as story engines, and challenging the terms of the reader/text/author relationship.

Here’s a sample of the deck I used to pitch (it’s a sample, because the panel asked to keep some of the cards – always a good sign): 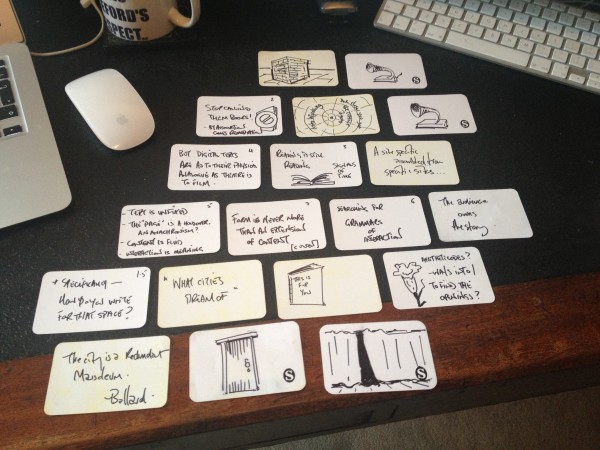 So why were the cards so useful? Well, I’m in broad agreement with John’s take on post-it notes; they’re fabulous for prompting me, but for something that needs both structure and a sense of permanent flux, they lose their appeal pretty quickly. Cards, on the other hand, are a deck. They can be shuffled and reused in partial decks to explain ideas, subdecks can be borrowed to start a train of thought on interaction or UX design, and then reused to clarify and develop ideas within a larger frame.

Neil Gaiman (https://twitter.com/neilhimself) we bring into the process in March, by which time the shape of each experience will be much clearer, and I confidently predict there’ll be a deck on its way back to the US.

However, if John is taking suggestions, what I’d like to see are wallets. I have a set of tiny bulldog clips that hold the decks for this project together, but it’d be much nicer to have those organised and available without digging through a bag every time I want to revisit an idea.

And you know what? Apps…