Before I write the Smithery Project outline for 2012, I thought it’d be worthwhile trying to grade last year’s three projects.  Three still seems like a good number of personal things to try to do in a year, despite the progress (or lack of therein) you’ll see below.

To recap; I gave each of the three projects an outline of  what I planned to do (read them all in full here), a reason to do it (WBB) and a goal (WDG).

Here they are in the original order.  Let’s see how I did…

1.  Make Something With Twine For My Son To Play With

In short:  When I received twine, I was going to turn it into a toy for James to play with, to see what would make an interesting link to the internet for him.  I like family projects too.

Why Bloody Bother (WBB) – the internet of things movement continues apace, but I suspect that it will be projects like Twine that kick it into something stratospheric; by lowering the access point of the technology to more people, more ideas and energy will flow into the space.

Wooly Doable Goal (WDG) – make enough time to make Twine do something interesting for James, and share it for other parents to have a go too.

Ok, so part of the problem lies in this we snapshot from the original post… 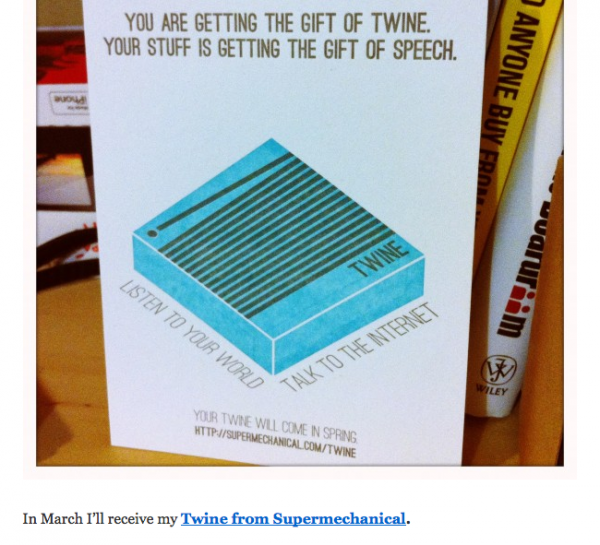 As it turned out, Twine eventually turned up in December.  The delivery of the actual things that people back as Kickstarter projects is testament to how hard atoms are compared to bits, of course.

Unlike a lot of other things, Twine is shipping, which is ace (projects like Pebble aren’t far behind, but as always there’s a litany of Kickstarter projects that still aren’t arriving).

It arrived a bit too late for me to do anything with in 2012, though.  But at least I have more of an idea about what to do now.

Having poked around Twine and the software a bit more, I think that one of the most interesting bits of it might be that it knows which way up it is.

I abandoned this slide at a talk I did in Paris last year, for fear that it wouldn’t translate, but I still like the sentiment: 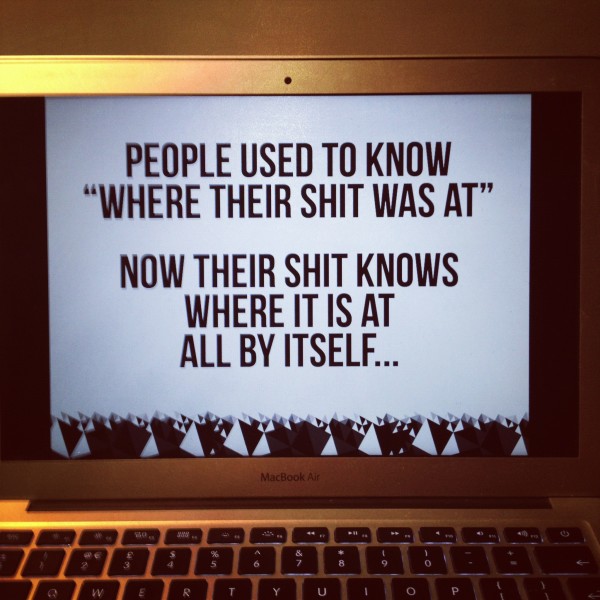 I’ve started thinking that if it knows which way up it is, it’d perhaps make an interesting smart dice.  It’d need to be right in the middle, properly weighted, or course.  And the dice itself will be a bit big.  But it occurs that it might be interesting to play with at home as well as in a workshop environment. 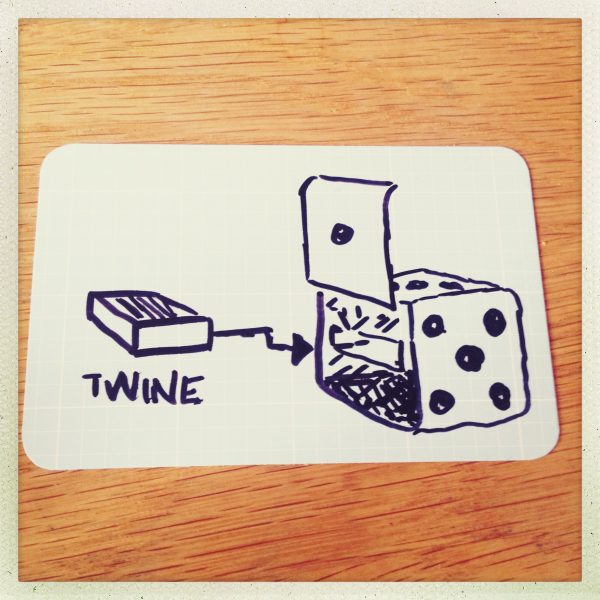 With all that in mind, I’m going to shift this project into being one of the ones for next year; and so…

In short: I’d been playing around with Arduino to create a wee dial and ‘send’ button to send the resulting score to the interest (twitter, specifically).

WBB – A lot of the work (client & personal) I seem to be doing is surfing the crack in the universe between physical and digital, but rather than just focussing on turning digital things into physical stuff, I want to explore different sorts of interfaces that lets people control digital things with more natural, physical gestures.

WDG – Get a version working in a self-contained guitar-pedal-esqe box, possibly even make more than one, and see who’s interested in playing.

Appallingly.  The prototype remains in its box on my project shelf, the neglected child of the Smithery workshop.  Poor thing. 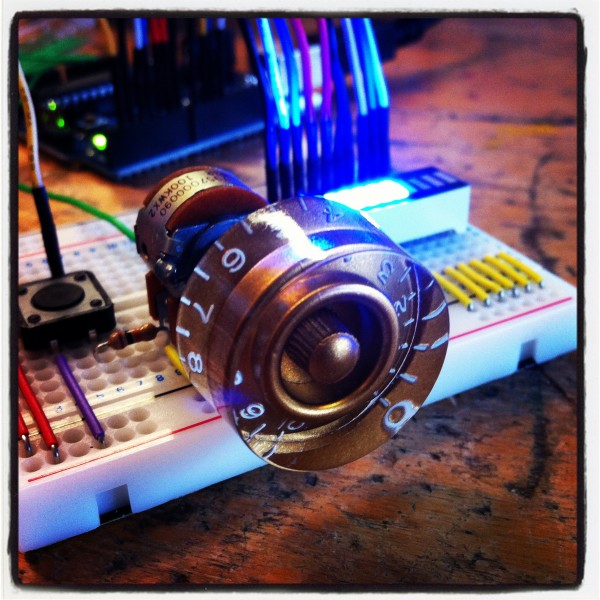 I had one good meeting with Adrian though, back in early June, to talk about the idea a little and see if it sounded interesting to someone else.

But by and large, this project remains untouched.  No coursework has been submitted, no exams taken, so unfortunately…

GRADE: FAIL
Postscript; as it happens, my brother is a Doctor in Electrical & Electronic Engineering, and also now developery-innovation-type at Data 2 Decisions.  And I compiled an Arduino starter kit for him for Christmas.  So this might just turn into another family project…

3. Take Artefact Cards and turn them into a product

In short:  Artefact Cards were a little personal thing I’d made for myself, and had just been testing them with other people to see what they thought.  I wondered if there might be more in it after that first round of research.

WBB – I’ve found it such a refreshing way to change how I think and work up ideas that I believe there’s value in the approach for other people.  And I’m really enjoying the journey in working out how best to bring it to life in the right way.

WDG – turn the Artefact Cards into a good product rather than just an interesting idea.

Better then the other two, that’s for sure.

Developing the actual product was a lot of fun, mixed with a fair bit of atomical frustration.  And it’s paper, card and printing, never mind plastics and electronics.  Tim Milne of Artomatic‘s been an invaluable help in getting them out into the world.

There’s also a proper shop and everything, which was surprisingly easy to set up using Shopify and a subdomain on this Smithery one.  It’s nice having a shop, and the data behind it is interesting and educational too. 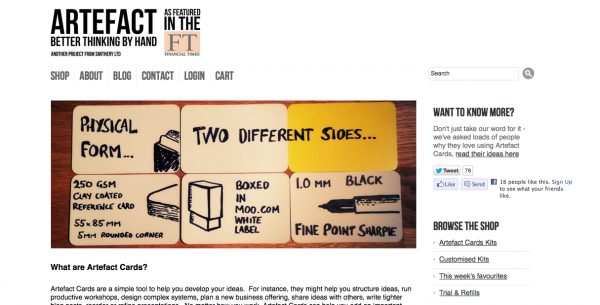 There’s two sides to the Artefact Cards – the kits you see on the site for individuals and small teams, or the customisable sets for large teams, businesses, pitches and the like.

They’re about equal in terms of units of sales, I think.  I say ‘think’ because I haven’t really had a chance to boil down into a proper sales review.  I reckon that we’re well into four figures now in terms of Artefact Boxes that are out there, given the inventory that we have left of various bits.

This is all a bit haphazard, perhaps, when compared to proper online ecommerce.  That’s the next step really; turn Artefact Cards from ‘good product’ to ‘great one’ (I was suitably inspired yesterday by this post from Hiut Denim about the difference between good and great…)

And that means sorting the ecommerce, working out proper economies of scale, price-setting, discounts & sales, subscriptions, product mix… all that.  But given the ambition I set out with at the beginning of the year…

(I thought about this a lot, and A- is probably fair, given the “interesting idea to good product” ambition.  But it rings a bit hollow, because it shows that I probably need to set harder targets for myself).

So there you go; one success, one failure, and one project abandoned due to the winds of time and the whims of atoms.  A good year, but not a great one.