There was a marvellous programme on the telly at Christmas with Stirling Moss being in equal parts accompanied, probed and worshipped by Patrick Stewart.  It’s still up on iPlayer, and is available till midnight on Friday 4th. 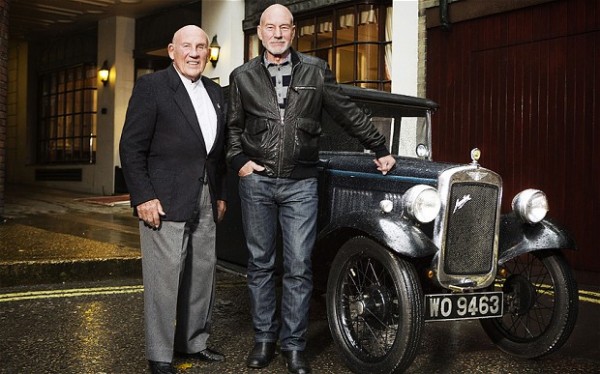 Whilst we were watching it, my Dad turned to me and said ‘I met him once, you know’.  Dad’s uncle had been a motoring journalist and photographer, a guy called David Phipps, and had taken Dad along to Brands Hatch once when he was about twelve.

They were meeting Stirling Moss there where he was testing a Porsche round the track.  Then Jack Brabham, Aussie motor racing legend, turned up.  Neither Brabham nor Moss knew the other would be there, and given the rivalry were none best pleased either, though Dad says given he was only twelve at the time, all that passed him by.

Dad took this photo below of Brabham, his mechanic and another driver, inspecting a car. 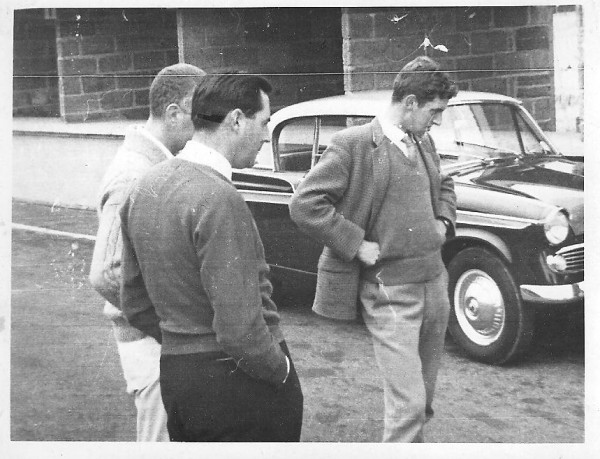 It’s one of several Dad took on the day (he’s digging the rest out, and if he finds them I’ll add them up here).

For whatever cavalier nineteen-fifties reason, they also let him Dad down on the grass on the inside of one of the track bends, taking photos of the racing cars as they sped round.

That sounds eminently sensible, doesn’t it?

Photos like these nowadays (especially the candid, close up ones with your heroes) get upload straight to Flickr, Facebook, Instagram or wherever.  It’s not so much that there are more cameras around nowadays; there are, but perhaps the different between every house having a camera and a camera phone isn’t that pronounced.

It’s just that there’s somewhere to share them quickly, instantly, widely.  Whereas they used to end up in albums on a shelf, or a box in the loft.  The connection between people is more important than the things they share.

Maybe more often than not, photos are a people thing, and not a thing thing, as Mark talks about.