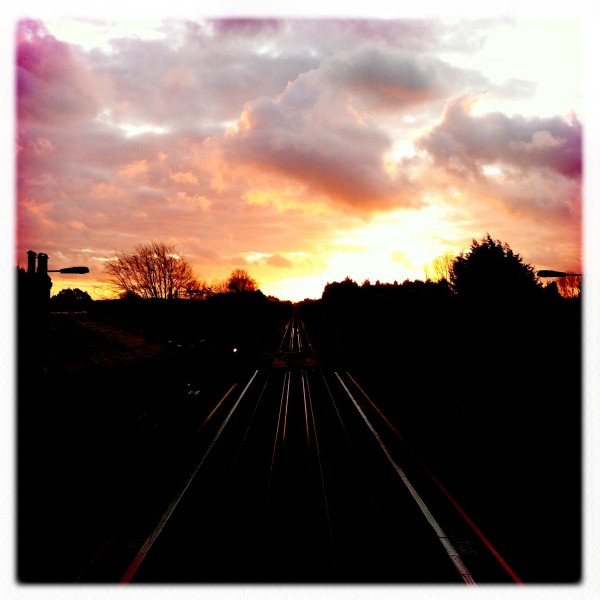 This is a longish post, but given it’s about a longish project, that’s probably fine.

We moved to Plumpton, Sussex in April 2011.  It was just before Smithery started, so after a long weekend of lifting, unpacking and discovering, I had to go to back to work up in that London to PHD.

As I crossed the bridge at Plumpton Station over to platform 2 for the first time, I looked back down the line, towards Lewes, East Sussex, the coast and beyond.  It’s a rifle-straight track, accompanied on its way by a guard of honour of trees and fields.  If the Romans had built train lines, they’d have been proud of this one.

I took a picture on that first day to mark the occasion in some small, transitory way, and shared it on a wee social network called Instagram.  I used the hashtag #plumptonmornings for it.  This is that very first one… 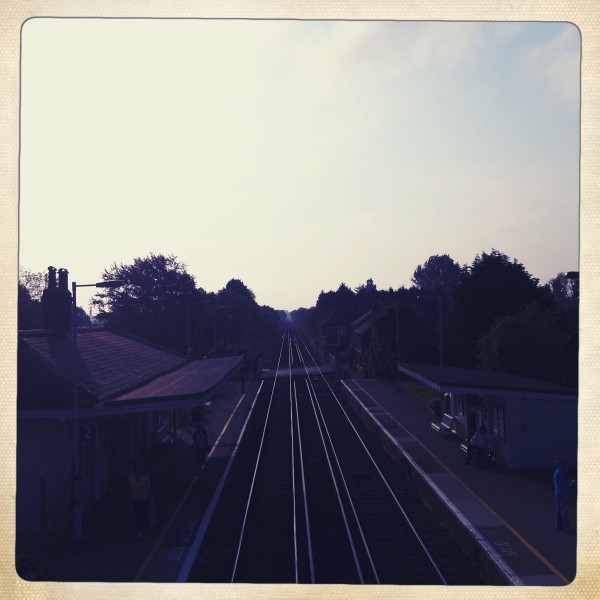 I’m really angry with myself for how bad this picture is.  I’m nowhere near the centre of the bridge.  The horizon is wonky.  It’s rubbish.…. when I invent my time-machine, that’s the first small thing I’ll fix…

Back then Instagram was just a small startup in the Valley with about 5 milllion users (yes, I know, small…).  Nowadays it’s part of the Facebook empire, having been bought for a billion dollars.  Or a billion dollars ’worth’ of Facebook shares, which turned out to be a different thing entirely.

Yet despite it’s cornucopia of filter options, I didn’t use Instagram to take the picture, however.  I used their now failing rival, Hipstamatic.

Hipstamatic are a company who were one of the first to the ‘nostalgic photo app’ game, but who’d misread the winds of business models – why bother building a business which makes money, when you can build one who gathers users?  Don’t sell things to users, sell users to companies who need more users.

On that note, if you haven’t already you should really read this three part story on Hipstamatic’s woes from Fast Company.  It highlights, in part, how it all started to go wrong for Hipstamatic when they started trying to build a social network into their business.  When what they were better at was making a good product….

The product is why I like Hipstamatic.  I have bought a lot of upgrades to extend the functionality as far as I can.  I may have bought all of them.  Perhaps I am one of the 100,000 users an ex-employee refers to in the Fast Company piece ‘who will buy almost anything’.

Which is an ugly turn of phrase for a company about customers, perhaps, but nobody said the Valley was a pretty place to work.

Exactly why do I like it though?  I’ve thought long and hard about this, and come to the following conclusion.

It’s not about a misplaced sense of nostalgia.  I’m not looking for a “vintage” camera app.  I don’t like the photos the app produces because they remind me of photos as I used to know them.

Can I be nostalgic for a style of photos that I’ve never taken or developed?  Or is it some sort of secondary nostalgia, like twenty-year olds who spend their Saturday nights at fifties rockabilly shindigs? 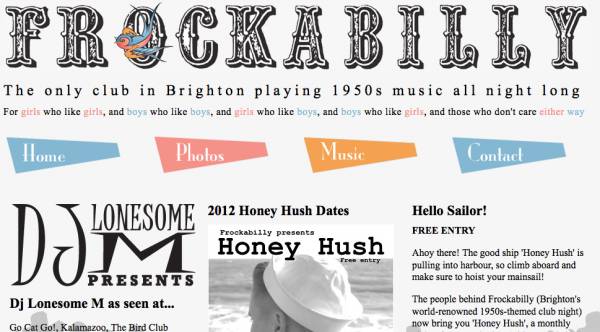 It’s not that I want a quick way to take photos that look like they were taken on a Polaroid camera in 1982.

I  want a quick way to make photos look more interesting than they do when using an iPhone camera in 2012.

If anything, I think the vintage theme holds Hipstamatic back.  I primarily value Hipstamatic for what it does for me.

Perhaps in the wild west of app land, function is permanent, form can be temporary.  And the retro thing is cooked, overdone.  People will play around with the past.  But they will buy into the future.

What future for Hipstamatic then?  A good one, maybe, if they keep focussed on what people actually use the app for.  In short, it’s labour-light, talent-light photoshop.

I could spend hours playing with every photo I’ve taken on Photoshop, retouching and filtering them myself to make them interesting, different.  I was always a sucker for the ‘filter’ section in Photoshop, randomly experimenting to see what would happen to photos if you overlayed lots of stuff on them.

Filters (be they on Photoshop, Instagram or Hipstamatic) are like the guitar effects pedals of photography.  I see no point being all purist about them.  It’s a bit like the acoustic folk lot who decried Bob Dylan’s use of the electric guitar.

Yet I have not the time, patience, nor inclination to spend every waking hour doing that to photos.

Hipstamatic lets you swap control for serendipity, like the lucky dip of photo manipulation.  It has a ‘shake to randomise’ function, so rather than knowing what combination to choose of ‘film’ and ‘lens’ (yes, really means ‘border’ and ‘filter’), you just click and hope.

For Plumpton Mornings, I’d shake the camera on the way up the steps on to the bridge, so that I didn’t know what combination it has loaded, and take the photo at a precise point on the bridge; one foot either side of a thin tarmac join, one foot away from the rail, phone at chest height. 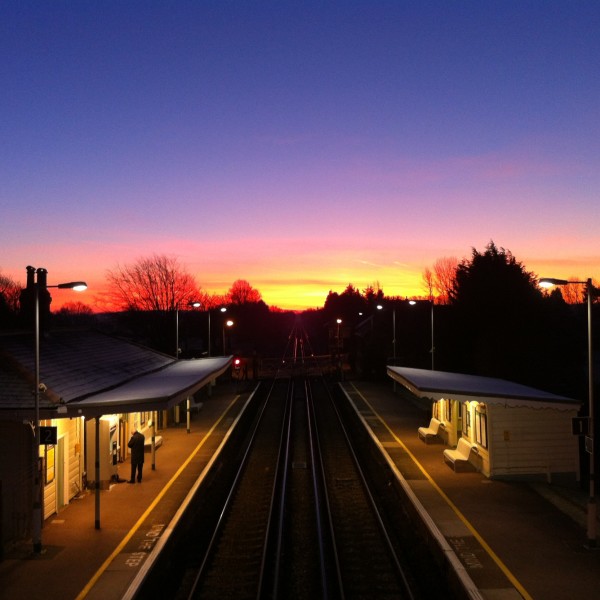 By the time I was at the bottom of the steps on the other side, all the filtering and processing has been finished.  It would take about 120 seconds of every day to take, process and upload each picture.

This laziness means that I have much, much less control than I could have over every picture.  But it actually pushes it out the other side of ‘control’…

The photo of that day is set by circumstances out of my hands.  Some great sunrises and bizarre cloud patterns have been made to look particularly ordinary, and some fairly ordinary mornings have been transformed by the digital trickery buried in my phone somewhere. 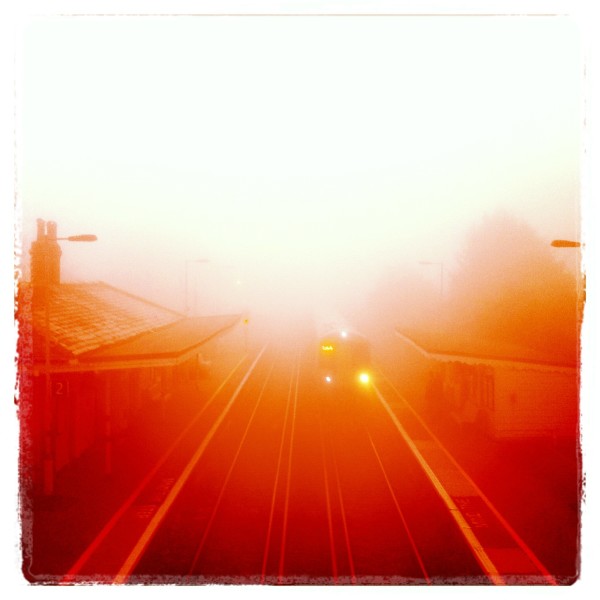 The best pictures were the ones when the natural elements and digital elements conspired to make some spectacular images.

The capturing stage of the project lasted for a year and a day – 26th April 2011 – 26th April 2012.  There are 179 #plumptonmornings pictures that I would consider to be part of the official canon…. 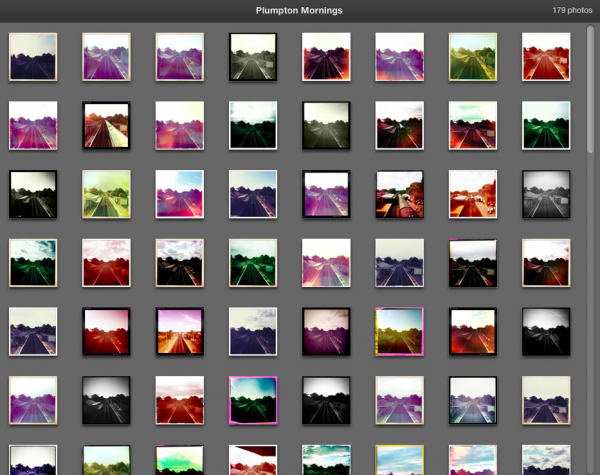 I still take the pictures of #plumptonmornings, but I don’t consider those part of the project… they’re nostalgia for the project itself.

All the subsequent pictures, like the one this morning, are just echoes of the idea… ghosts of a project I did for a year. 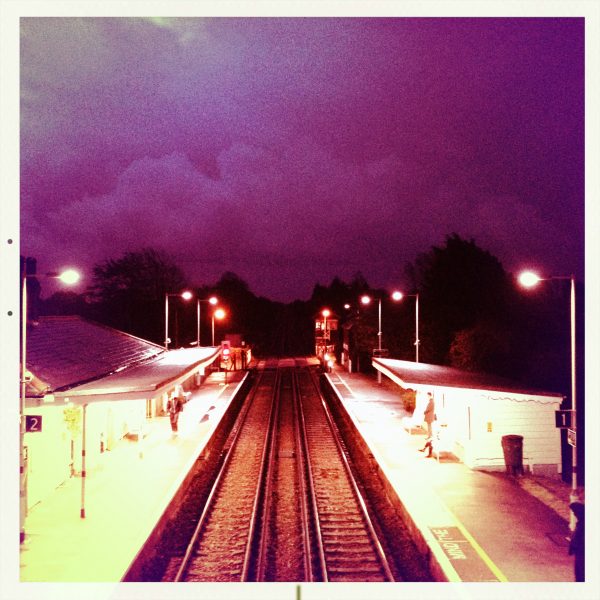 Plumpton Mornings is a project that’s representative of the changing nature of photography.  Where there is no scarcity, as we endlessly click click click with no consideration, we must find ways to create other types of scarcity.  I will only take this once a day, when this happens, when I see this, or pass that, or use this, or shake that.  Cultural projects need creative restrictions.

And there are lots of these photo projects around, because we’ve all got the tools in our pockets to capture them, and some folks find an interesting creative restriction to work with, be it sleeping commuters or IBM tills… 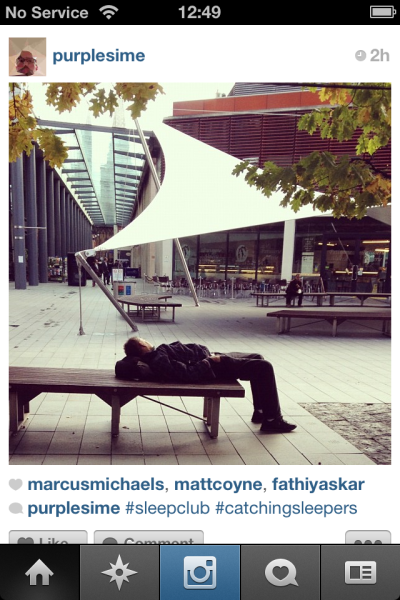 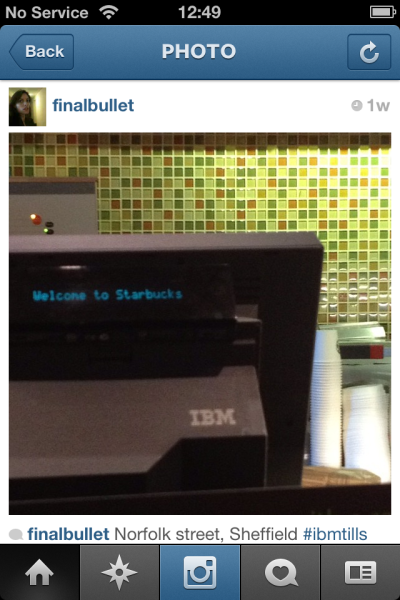 It’s a point reinforced in a snippet from this  Verge article (“Everyone shoots first: reality in the age of Instagram”) –

“Culture is no longer made for us by others. Increasingly, ordinary individuals are able to roll their own”

In part, people are making more cultural things that they’re interested in at the start, rather than the end… we’re moving back through the culture factory and making stuff, not just consuming it.

And it serves do to what culture has always done, in that it reveals a bit more about who we are.  But here, it tells us exactly who we are, because we made the cultural thing rather than just sought meaning in someone else’s vision.  It’s a cultural interpretation of our past.

Plumpton Mornings was a small memento of every commute up into that London across the course of our first year in Plumpton, a randomly generated visual interpretation of that morning, a way to store other data (such as the time and date stamp of when each photo was taken).

“one year after an event, on average, about 11% of the online content referenced by social media had been lost and just 20% archived. What’s equally striking, moreover, is the steady continuation of this trend over time. After two and a half years, 27% had been lost and 41% archived.”

What I’ve found myself doing is making permanent things, which will decay with more grace (decolouring, patina etc) than their digital counterparts, which will one day simply flick from there to not there, as an errant line of code is put where it shouldn’t be, or a server in the the middle of an ocean somewhere crashes… 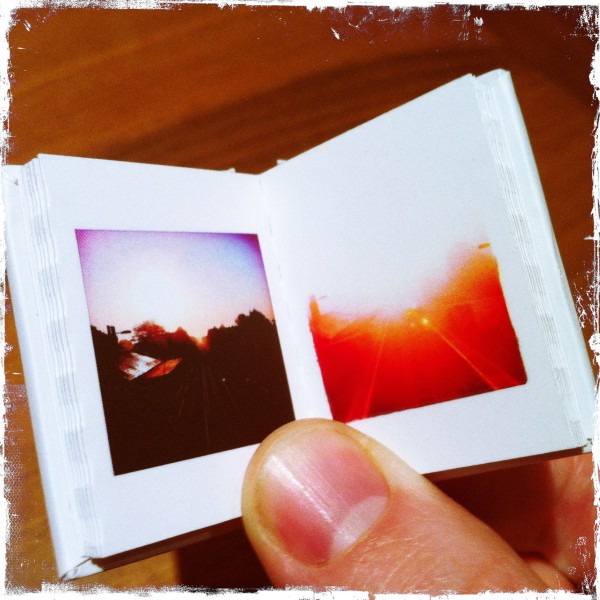 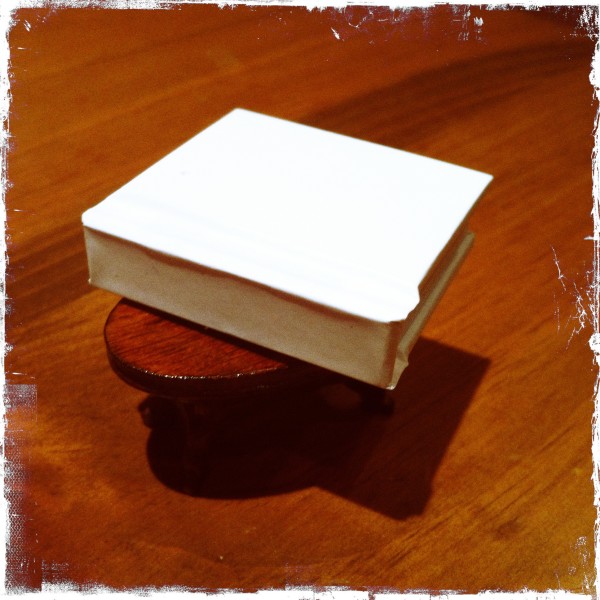 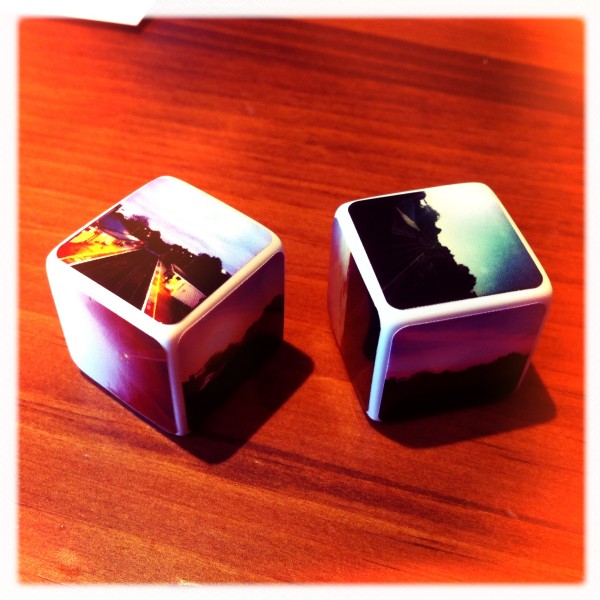 And the last piece is here, a picture that Helen, my wife, asked for.

It’s one of three square pictures that are just under a metre long, the other two having been auctioned to raise money for local charities. 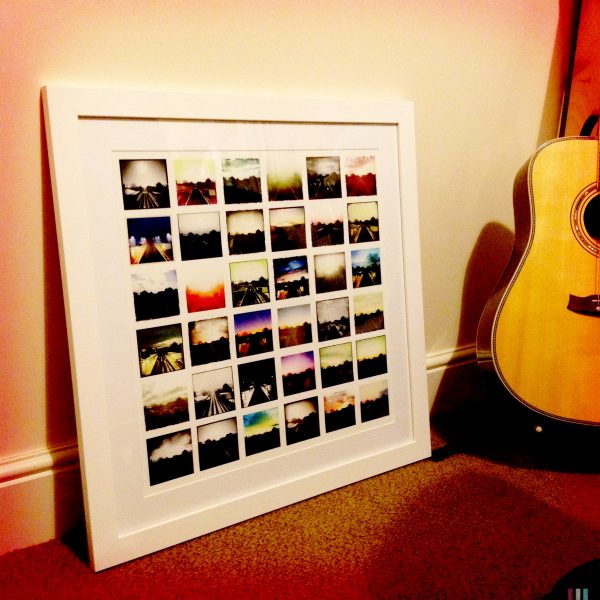 I think this picture represents the last act of the Plumpton Morning project, and by that I mean it’s the last physical execution I’ll do.  I want to end the project before Hipstamatic disappears, because that would be weird in some way.  Plus, ending things is hard.

At the MakerFaire in Brighton last month, Tom Armitage mentioned something in a talk he gave about being “bored with not finishing projects”.  I know that feeling, I have various unfinished things lying around.

But I’ve found that it’s a lot easier to consider that you have finished something if you’ve done it away a significant part of it away from the internet.

The internet is endless, waiting to be filled and filled with as much and as many things as you can produce, and it will still beg for more.  Whereas you can freely introduce scarcity again by moving things off the internet, and into the real world.

So, come Friday moring, if you still see me taking pictures that look like Plumpton Mornings, and are tagged #plumptonmorinings on Instagram, that’s fine.