The Artefact Cards project has dominated the Smithery blog over the last couple of months, and I think it’s high time to hive the majority of that stuff off to here, the Artefact Cards blog.

It has earned the right to exist in its own right, I feel, as there are a whole range of different trial packs and seasonal kits available for sale in the shop now.  However, I thought I’d send it on its way with a little post on two stories from the last few days. 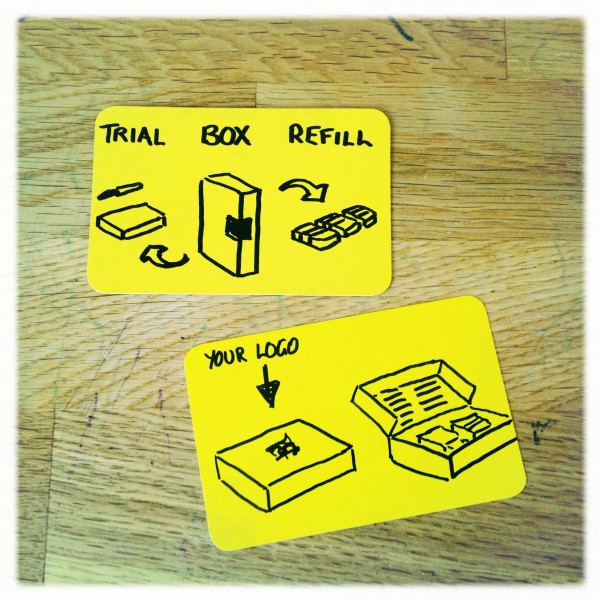 Ian Sanders, long-term supporter of the Artefact Cards, wrote a visual thinking article as part of a regular gig he does for the Financial Times a couple of months ago.

It led to a good few new customers, including a particularly large order from a Oxbridge management school, but what’s more it brought customers from areas I hadn’t anticipated or thought about.  I’d thought about planners, strategists, creatives and the like as customers, because that’s the world I knew.

Anyway, Ian sent me an email this morning:

“A random Friday morning tale:  My wife was admiring my Artefact cards (I gave her a few to play with – she’s a doodler/hypnotherapist) and asking how I discovered Artefact cards.

And I had to scratch my head. But I think it goes like this:

I discovered Artefact cards because I follow you on Twitter.
I follow you on Twitter because I saw you speak at Firestarters.
I saw you speak at Firestarters because Neil Perkin invited me.
Neil invited me as I’d contacted him after he – indirectly – mentioned me in a blog post.
Neil – indirectly – mentioned me as he referred to/embedded a cartoon Tom Fishburne had done.
Tom Fishburne had done the cartoon about the subject of a session I hosted at SXSW in 2010.
So it’s all Tom’s fault in happening to turn up at my session…….

I know this is an unremarkable story of serendipity but I thought I’d share it (didn’t fit in a tweet!)”

By walking through different disciplines, we makes interesting things happen, but in an inadvertent way… like leaving the door open so the wind blows something over in the room, knocks it to the floor, so it makes a noise, wakes the dog…

We all can walk into different rooms, if we try.  The thing is you have no way of guessing what will happen if you do.  You can’t second guess the effects you will have.  So just walk into new rooms… and see what happens.

There are three of ‘us’ in the Artefact Process – I design ’em*, Tim Artomatic produces ’em, and Keith at Axminster Printing Co makes ’em.

Tim works out of Clinic over in Farringdon, and so when I was over there he had printed out a copy of the new packaging box that the Artefact Cards will ship in (see below). 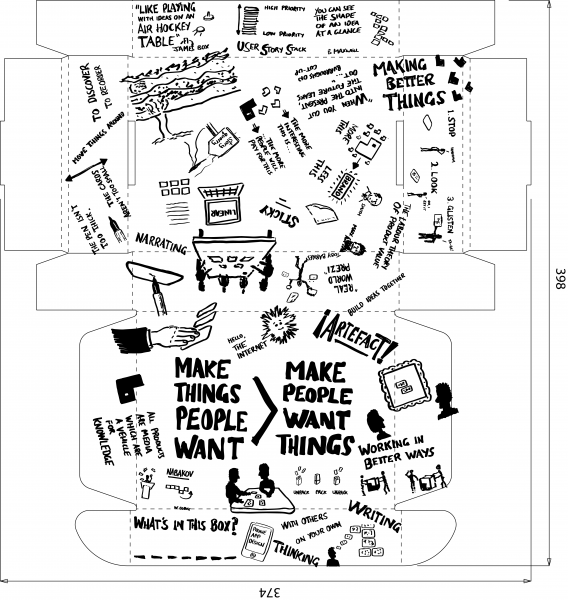 Tim had, in fact, he’d printed out two copies, to two different printers… because sometimes they get caught behind bigger jobs, or the toner is out, or the connection is down, or any of those things that makes office printers such a joy.  Tim took the first copy, wrapped it round the test box, and it looked great, so we called it a day.

Yesterday, Tim told me, he became vaguely aware of Andy Hunns (CD at Clinic, and founder of Small Japanese Soldier) going round the office with a vaguely familiar printout in his hands, saying ‘Whose is this? Who printed this out?”.

‘Bugger’, thought Tim, ‘I’m in trouble for something’.  But ‘fessed up anyway.

Turns out Andy wasn’t angry or anything.  He’d just been looking for an illustrator who could convey information in a particular way, and he hadn’t been able to find anyone as yet.  So now we’re going to start working on a project together, using the cards, where I’m doing some weird hybrid role of illustrator/strategist.

Do some wandering, leave some doors open, leave things on printers… and things happen you couldn’t begin to guess at.  What it reminds me most of is “Oh, The Places You’ll Go” by Dr Seuss.  And I can think of no finer way to end a Friday… or start a Monday, depending on when you read this…

Congratulations!
Today is your day.
You’re off to Great Places!
You’re off and away!

You have brains in your head.
You have feet in your shoes
You can steer yourself
any direction you choose.
You’re on your own.  And you know what you know.
And YOU are the guy who’ll decide where to go.

You’ll look up and down streets.  Look ’em over with care.
About some you will say, “I don’t choose to go there.”
With your head full of brains and your shoes full of feet,
you’re too smart to go down any not-so-good street.

And you may not find any
you’ll want to go down.
In that case, of course,
you’ll head straight out of town.

It’s opener there
in the wide open air.

Out there things can happen
and frequently do
to people as brainy
and footsy as you.

You’ll be on your way up!
You’ll be seeing great sights!
You’ll join the high fliers
who soar to high heights.

You won’t lag behind, because you’ll have the speed.
You’ll pass the whole gang and you’ll soon take the lead.
Wherever you fly, you’ll be the best of the best.
Wherever you go, you will top all the rest.

Except when you don’t
Because, sometimes, you won’t.

I’m sorry to say so
but, sadly, it’s true
and Hang-ups
can happen to you.

You can get all hung up
in a prickle-ly perch.
And your gang will fly on.
You’ll be left in a Lurch.

You’ll come down from the Lurch
with an unpleasant bump.
And the chances are, then,
that you’ll be in a Slump.

And when you’re in a Slump,
you’re not in for much fun.
Un-slumping yourself
is not easily done.

And IF you go in, should you turn left or right…
or right-and-three-quarters? Or, maybe, not quite?
Or go around back and sneak in from behind?
Simple it’s not, I’m afraid you will find,
for a mind-maker-upper to make up his mind.

You can get so confused
that you’ll start in to race
down long wiggled roads at a break-necking pace
and grind on for miles across weirdish wild space,
headed, I fear, toward a most useless place.
The Waiting Place…

Waiting for the fish to bite
or waiting for wind to fly a kite
or waiting around for Friday night
or waiting, perhaps, for their Uncle Jake
or a pot to boil, or a Better Break
or a string of pearls, or a pair of pants
or a wig with curls, or Another Chance.
Everyone is just waiting.

Somehow you’ll escape
all that waiting and staying.
You’ll find the bright places
where Boom Bands are playing.

With banner flip-flapping,
once more you’ll ride high!
Ready for anything under the sky.
Ready because you’re that kind of a guy!

Oh, the places you’ll go! There is fun to be done!
There are points to be scored.  there are games to be won.
And the magical things you can do with that ball
will make you the winning-est winner of all.
Fame!  You’ll be famous as famous can be,
with the whole wide world watching you win on TV.

Except when they don’t.
Because, sometimes, they won’t.

I’m afraid that some times
you’ll play lonely games too.
Games you can’t win
’cause you’ll play against you.

All Alone!
Whether you like it or not,
Alone will be something
you’ll be quite a lot.

And when you’re alone, there’s a very good chance
you’ll meet things that scare you right out of your pants.
There are some, down the road between hither and yon,
that can scare you so much you won’t want to go on.

On and on you will hike
and I know you’ll hike far
and face up to your problems
whatever they are.

You’ll get mixed up, of course,
as you already know.
You’ll get mixed up
with many strange birds as you go.
So be sure when you step.
Step with care and great tact
and remember that Life’s
a Great Balancing Act.
Just never forget to be dexterous and deft.
And never mix up your right foot with your left.

So…
be your name Buxbaum or Bixby or Bray
or Mordecai Ali Van Allen O’Shea,
you’re off to Great Places!
Today is your day!
Your mountain is waiting.
So…get on your way!

* “DESIGN”?  Funnily enough, I caught up with Amanda Gore over at the Design Council earlier this week, and we were talking about what a ‘designer’ is.  I certainly don’t consider myself a Designer (with a capital D), but then I’ve seemingly ‘designed’ the Artefact cards… so what makes some who designs a proper Designer…?  One for another day.