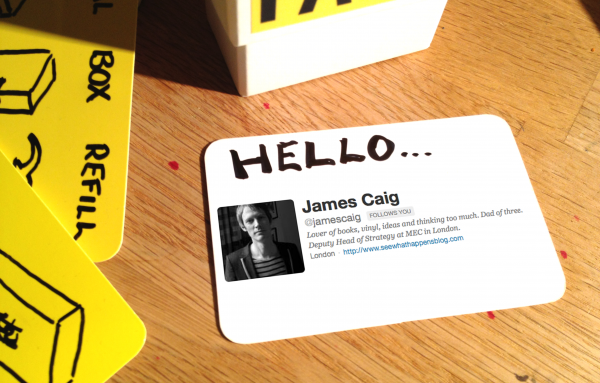 How did you think you’d used the cards?

Group workshops would be the first target. Too many brainstorms suffer from post-it abundance. The ideas captured are thin and superficial. They hang off over-loaded flipchart paper and make post-workshop interpretation both cumbersome and subjective. Hopefully Artefact would encourage participants to articulate their ideas in a more rounded, actionable way.

I did have one reservation, though. Idea generation can be inhibiting. Sometimes post-its can encourage that workshop throat-clearing that gets you to the good stuff. What if the cards induced unnecessary pressure?

Writing presentations would be next. I use post-its to detail the component parts of a story anyway, and like to build or order the story as new elements are generated. But I often end up with a story with too many sub-plots. I had hopes that Artefact would help me maintain control.

Finally I was also looking forward to using a format that would encourage me to draw. It can capture the essence of a thought more three-dimensionally. Something about the combination of Sharpie and the finish of the cards looked like they might force that side of me into action again.

How did you actually use them?

When they arrived I actually felt strangely intimated by them. They were smaller than I expected, and it took a while to luxuriate in the white space rather than flee it. I’d also under-estimated people’s comfort with familiar tools – like post-its – and how self-conscious they can be when asked to try something different.

But I found the permanence of Artefact ultimately motivating. At first I found myself using Artefact to capture an image or a thought in place of merely writing it in my notebook. I liked how the idea then hung around, sinking in slowly, rather than becoming lost in a record of meeting notes and action points. Briefing others became easier as a result – that brainwave you had during your run was more solid, more tangible than it would otherwise have been.

Eventually I was introducing Artefact, unannounced, into group settings. In one situation found myself drawing ideas we’d been discussing for a while as a group, and it was the first time we all felt on the same page. 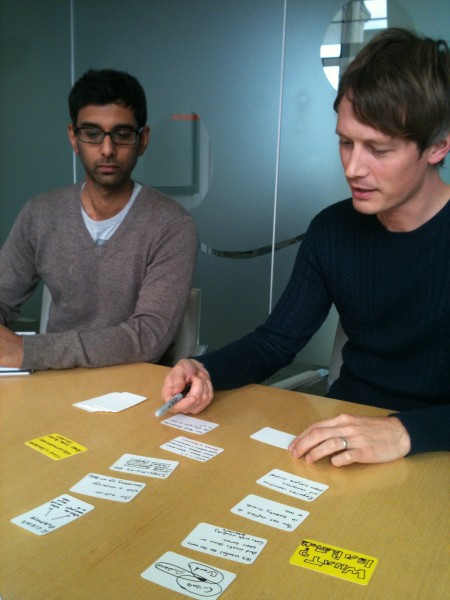 Another time two of us made sense in an hour of a project that had had us all tail-chasing for weeks. Discussing the idea as a pair helped us map the territory we were venturing into, and the cards singled out the landmarks. The debate was crucial – we jointly agreed when a card was genuinely called for. After that, moving them around, grouping, re-ordering – it was all easy and clean. It’s here that Artefact’s design wins out. The playing card finish makes them easy to slide around the table, sort, play with. Scoop them up in the final order, put them in your pocket and you’re done.

Have they changed the way you do anything?

Changing the way you express ideas has an effect on the way you think of them, I think. The permanence of marking the cards means each one needs to count. You’re forced to think, concentrate and decide. The idea or the story becomes more concisely expressed.

I also find myself capturing client ideas less in the abstract, and more as they would be experienced by consumers. It can be satisfying to linger on cleverly reconciled concepts or problems, but representing ideas as they would take shape in the real world is way more useful. You get to the ‘so what’ a lot more quickly.

I’ve found the group dynamic changing too. Recently a bunch of us were trying to crack a fairly theoretical question from a client. I noticed everyone was making individual notes. It’s either that or one person dominates the flipchart. As I started using the cards to capture the dominant themes attention began to focus on them. People started ordering them to find the story. We’d pooled the effort and got to a more definitive place than I think we would have done otherwise. I took the cards with me. Two hours later my colleague if he could borrow them to help write the deck. 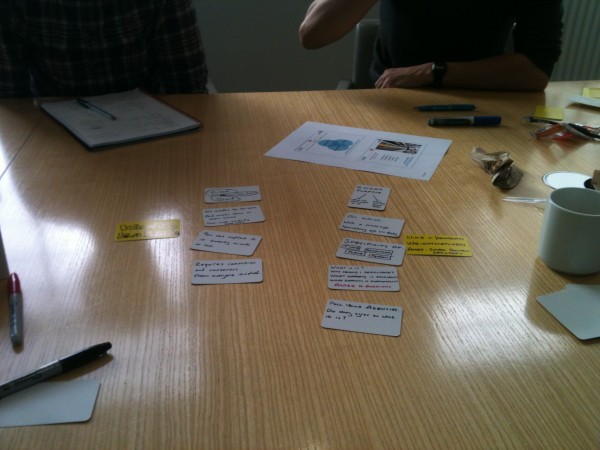 I’ve tried blogging with them too. Writing for me is still an iterative experience – what I want to say emerges as I’m writing. But the cards undoubtedly helped provide a useful structure.

How do you describe them to others?

Actually I found this one of the most surprising elements. Artefact requires quite a bit of exposition – or perhaps justification. People can get it conceptually, but that’s not a guarantee of them being persuaded. People’s cynicism sometimes led them to see Artefact as expensive post-its.

Ultimately I discovered that using them in front of people was more persuasive – and a more tangible demonstration of how useful they are – than going through an explanation that risked either being too convoluted or under-selling the product.

The most authentic story is your own. I eventually worked out it was better to describe how I’d used them myself than try to replicate the accompanying booklet.

I tend to carry them around with me all the time now. I reach for them more and more frequently. Instinctively I know when an idea or moment is best served by the notebook, the phone or the Artefact cards.

I’m most excited by the collaborative opportunities, though. Very few ideas spring complete from one person’s – or even one agency’s – mind. Getting ideas out of your head and into the real world to aid debate and collective expression is critical to being useful to clients.

And Artefact is definitely a way to do that.

Read more from James Caig over at See What Happens