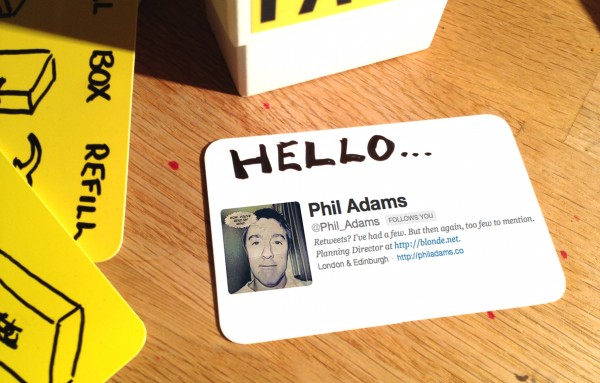 How did you think you’d use the cards?

Powerpoint has never been a platform for origination. It’s a downstream, executional tool. It’s about art direction. Before Artefact I used sheets of A3 paper to draft and hone my presentations. I would hand draw rectangles and create a rough storyboard layout, into which I’d write and sketch themes and thoughts without worrying too much about order. Later I would edit and impose order by scribbling out, numbering or drawing arrows to show which rectangle should come after which when it came to making things look pretty in Powerpoint.

So Artefact cards, before I bought some, looked like the logical evolution of what I was already doing. I’d still be writing and sketching by hand before jumping onto my Mac to execute. But I would no longer have to scribble, number or arrow to change the order.

So I was instinctively drawn to Artefact. But I was also a bit worried that there might be an Emperor’s New Clothes effect. They would be lovely and tactile and all that, but essentially just a fancy version of what I was already doing. Someone I knew from Twitter had had an idea and the gumption to make it happen. The financial and time costs were low. And so I felt almost obliged to support this maker. But I seriously doubted that I’d be making any kind of refill purchase.

How did you actually use them?

The cards are indeed a better version of my rough A3 storyboards. No surprise there.

But I have also used them as a collaborative tool. Two planners working on the same challenge independently sketch out some themes and ideas on Artefact cards. Then they get together to compare Artefact notes. You identify clusters of similar ideas. You co-create a narrative by shuffling and stacking. 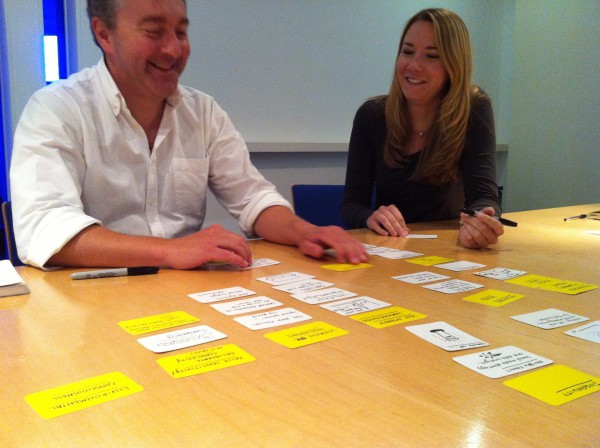 When it comes to stacking the two colours suddenly become very useful. We use yellow for headline themes and white (stacked underneath each yellow) for supporting data or anecdotes or stories or images or possible video references.

This chimes with my view of how good presentations work. You’re lucky if people remember two or three of your ideas an hour after you stop talking. So a good presentation doesn’t try to convey more than two or three (hopefully) big ideas. If a presentation is a river that you need to cross, you should aim to cross it using as few, and as big idea stepping stones as possible. The leap between stones should be as wide as possible and achieved by good supporting stories and the presenter’s personality. People are buying into who is doing the saying as much as what is being said. Too many too small stepping stones puts too much emphasis on the what at the expense of the who.

Artefact cards make it easy to plan this kind of presentation. Yellow cards for stepping stones. White cards for the stories you tell to make the jump from stone to stone.

I have also used the cards for theatrical effect.

In a recent chemistry meeting with a potential client we were asked to demonstrate our understanding of the key challenges faced by their brand in their industry. There was no way that we could cover all of the challenges in the time allotted for the meeting. So we hand wrote the headline for each challenge on a separate card. And in the meeting we held the deck out and asked the clients to “pick a card”. Then another. Then another. We got through maybe 4 out of 7 themes, but the client could see what the other three were and knew that we had thought about them to the same degree given that it was they, not we, that determined the order in which we discussed each challenge.

We’ve been invited to pitch as a result of that chemistry meeting so I can say with complete confidence that, at the very least, Artefact cards were not a failure ;-).

Have they changed the way you do anything?

I used to throw away my handwritten A3 storyboards once I’d art directed the presentation on Powerpoint.

Whereas I have kept a high proportion of the Artefact cards.

There are quite a few headline (yellow) themes and quite a few (white) stories that I will use again. They are safely stored in the Moo boxes (which travel with me).

It’s hard to dispose of the cards. And I think that has an effect on your quality control. The cards are a scarce resource, unlike A3 photocopier paper, and so you think twice before putting Sharpie to cardboard.

A lot of my best planning happens when I’m staring out of the window on a train. You let your mind freewheel and make unexpected associations. The (yellow) Artefact cards can act as a catalyst to this freewheeling thought process. The mental equivalent of giving a roundabout the occasional push to keep it spinning.

How do you describe them to others?

I suspect that you will have lots of your own ideas, and lots of suggestions from other people,  for how to evolve the Artefact offer. New features, new colours, whatever. I’d counsel against too much development. The binary approach to colour is perfect. Their simplicity is their strength. Their quality and permanence (versus Post-Its or A3 paper) is their strength. And their scarcity (until you buy a refill) is their strength.

And, despite my initial concern, I shall be buying a refill.