Well hello.  It’s high time for an update on the Artefact Cards.

Firstly, thank you – to all of you who’ve tested, bought, shared and generally been very nice about the cards.  They were the first of three projects for 2012 out of the traps, but such has been the response I’m kicking the other two projects over to 2013.

Tim from ARTOMATIC reckons I’ll only be doing Artefact in 2013 at this rate, but Tim has always been amazingly glass-half-full about everything… 🙂

Actually, just to clarify something; I use ‘we’ when talking about Artefact because there is a ‘we’ – the people who make Artefact happen are myself, Tim and Keith at Axminster Printing.  Essentially I design the things, Tim produces the things, Keith manufactures the things.  Some folk have asked about that before, thinking I’d started invoking a weird habit of talking about myself as ‘we’… I have weird habits, but that is not one.

The autumn batch is being planned as we speak.  The seasonality idea is something I’ve long admired in Field Notes, and so as the leaves turn and begin to drop, we’ll say goodbye to the Sunshine Yellow of the first batch, and hello to Pumpkin Orange… 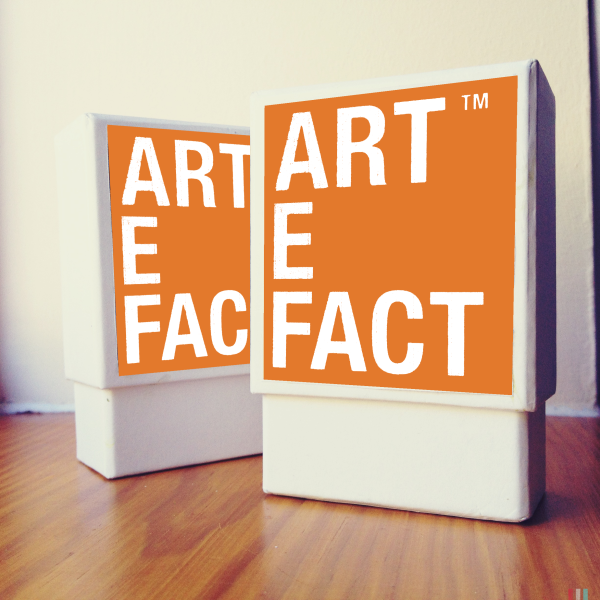 This is a mock-up, of course.  I try not to show anything that isn’t real, but I really wanted to share the most exciting bit of the autumn box; given it’s Pumpkin Orange for Halloween, each box will have a Glow-In-The-Dark sticker…

…because the best ideas go bump in the night. 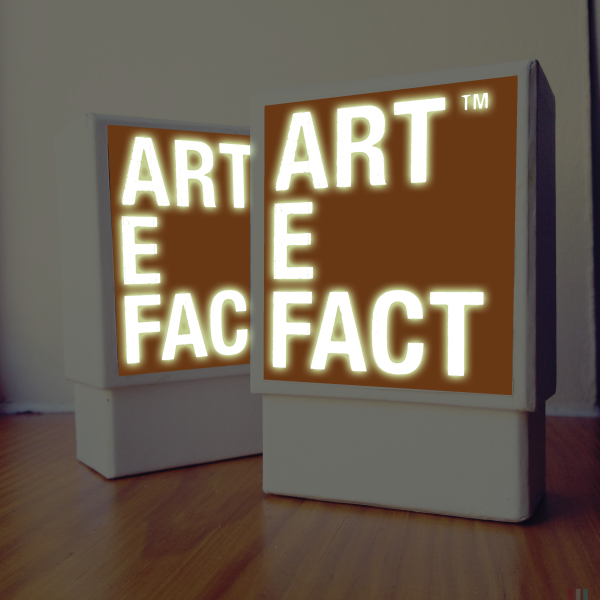 I am perhaps more excited about the Glow-In-The-Dark thing than anything else in the entire Artefact project so far.  Which is a bit daft, maybe, but I really like Glow-In-The-Dark stuff, it still feels like magic even when you’re 34 years old.

By the way, there are still a few last boxes of the Sunshine Yellow left, so if you fancy a bit of an Indian Summer, head on over to the shop to pick those up.

Now that we have a better sense of the process behind making & shipping the cards, there can now be a wee expansion in the range; rather than just the central kit, there will be three kits that will be on sale in the shop… 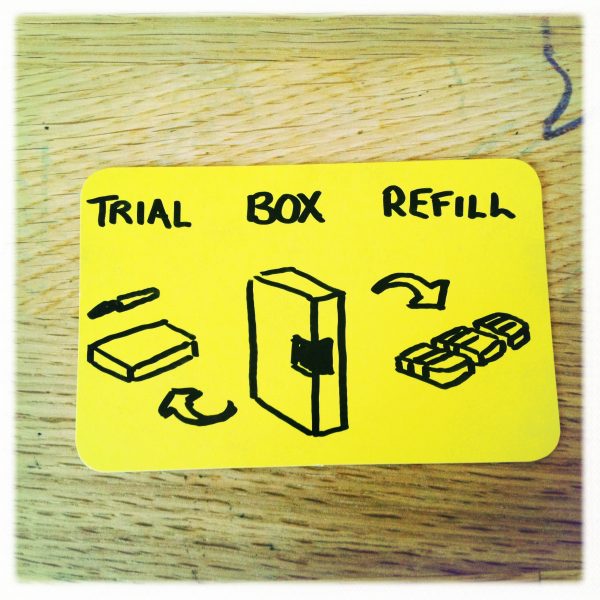 Firstly, a trial kit – one pen, a half pack of cards, and one of the instruction booklets.  I know some people have been curious about the idea, but without using them or seeing them in action, they don’t really know if it’s for them.

The trial kit will contain 50 cards for them to test out, which is enough for a reasonably complex project for one person, or a focussed workshop for a few of you.

Secondly, there will be the standard kit as before; two boxes of cards, two pens, two booklets, then some random nice accompaniments (it was badges and stickers last time round).

Thirdly, there will be a refill kit – 4 packs of 50 cards for you to keep restocking the boxes you’ve already bought in the standard kit.  I have been thinking about this a lot; because the boxes last for ages, people go through the cards quicker than the boxes.   Having refills seemed like a useful thing.

I also wanted to do them as an anti-Gillette model; rather than give away the handle for nothing then stiff people on the blades (which you do if you’re a global mass manufacturer), I’d rather find people who believe in the idea enough to buy the box, then supply refills pretty cheaply.

I’ve realised two things about the cards in relation to seeing other people using them.

Firstly, it’s that because people use them for work, they find it really hard to share the cards… they’re private, secretive, undeveloped, unfinished, important.  Not something to flash around.  So even though there was an #artefactcards tag, people only really used it to show pictures of them receiving the box.  Or, as Phil very neatly puts it in this post, doing Shutterstock homages… 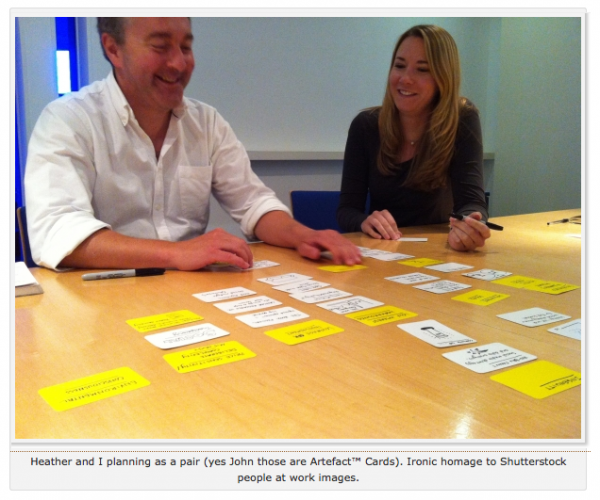 The second thing is that watching the cards at work across the community of people working on demonstrates just how effectively people learn to use them from each other.

A bunch of us (Mark, Tim, Louise, Collyn and myself) have been helping Royal Mail design their new MarketReach function, which has been set up to understand the place and power of physical communications in the modern communications landscape.

As part of the process, we’ve been using Artefact Cards since the project kicked off, and it’s become part of the culture of working, so much so that Tim Hamill there asked me if I’d do a special edition MarketReach one for them, which I was more than happy to do, of course. 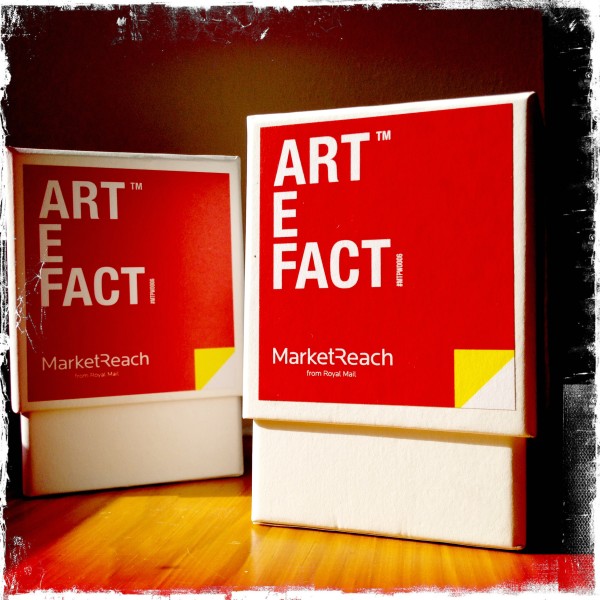 If people who work together on things have sets of Artefact Cards, they work out together how to use them.  And interestingly, it’s not how I would have envisaged using them a lot of the time; the group creates an informal set of rules about what you do with them.

With all that in mind, we’re going to do more ‘community sets’ – a way to deliver a big bunch of Artefact Cards to a business, workgroup, conference or other community.

The idea is to make up a slimmed down version of the standard box; one box of cards, refills, one pen, instructions inside the lid, then your logo / design on the case and on the fascia of the box (as above with MarketReach). 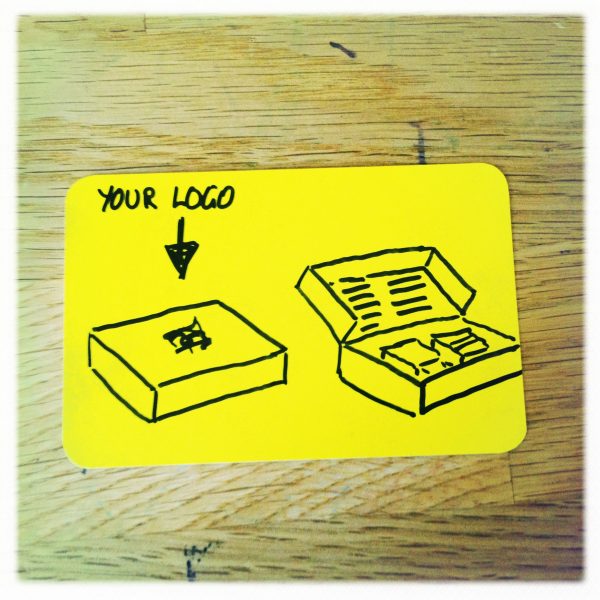 All in all, making more cards for shipping in October should mean that we can offer all of kits (trial, standard, refill & community) at pretty reasonable prices too, depdning on how many folk are interested.

What do you want me to do then?

One of two things, really…