Wherever I’ve worked, I’ve always been keen on getting out of the work space, and more importantly the work flow, and learning new things.

Field trips, as we would have all might have known them at school.  Though you don’t need a permission slip from your mum.   Unfortunately, you probably need to ask you boss for one.  Which is usually fine… ish.  Up to a point.  It’s doable.

Now, of course, I’m the sole body of ‘one-man studio’ Smithery… (Thank you to PAGE magazine for that description, it has become increasingly useful of late).

I am both boss and employee.  Field trip agitator and agitatee.  There is stuff to be done, says the boss.  But after field trips the stuff will be better, says the employee.

The employee wins out.  He’s alright, my boss.

So, I’ve had my eye on the Heatherwick Studio exhibition at the V&A for a while now… 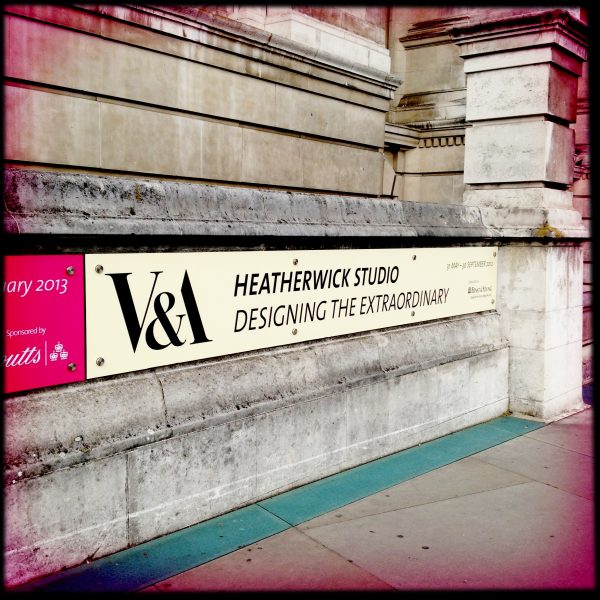 I think Ben Terrett put a photo on Instagram commending the Heatherwick ‘Making’ book about three months ago, which I subsequently bought and immersed myself in.

Having read most of the book already, I suppose the creations weren’t as much of a surprise as discovering them fresh, but of course they were still a delight to see in the flesh (even if they were largely scale models of final projects).

What was most valuable was the audio interviews that were part of the exhibition; exhibition curator Abraham Thomas interviewing Thomas Heatherwick, his collaborators at the studio and the commissioners of his work.  If I could recommend anything to you at this exhibition, it would be to pick up each and every last black telephone at an audio station and listen intently.

So anyway, some things it’s made me think about…

i – Experience or Expertise?

In big traditional architecture firms the designers of buildings don’t really learn anything about the qualities of the materials that will be used, because it’s not a requirement of the modern architecture craft.  Nobody makes you go out and build a wall with bricks, or bend some steel.

He talked about how it’s much better to have a conversation with a welding firm if you’ve done a fair bit of welding yourself; you don’t try to pretend you are a better welder than them, but if you have some understanding of the craft you can talk about potential ways to approach a project.

It’s not expertise you must try to convey, but experience.  Enough experience to know what the basic physical laws of a material are, and help the expert solve a problem in new ways.

I think it’s always valuable to know the limitations of your ‘expertise’.

I spent eighteen months once doing a lot of investigation and experimentation with game design, and by the end of it recognised that I was certainly not a game designer, I just knew about game design.  But I could spot the spaces where expert game designers were needed, and talk enough about the ‘material’ to help form the ideas.

Unfortunately, other partner agencies didn’t quite take the same approach, blundering into the “sure, we can do that, how hard can it be?” trap… quite hard, as it turned out.

It’s the Yosser Hughes approach – the unemployed character from Alan Bleasdale’s ‘Boys From The Blackstuff’ who, desperately seeking work, looks upon any opportunity with the words “I can do that… gizza job”

For various reasons, usually financial, there’s pressure on companies whose old model of business is breaking down to position themselves as experts in something new, and start building the walls and bending the steel where they are quite unqualified to do so.

Getting experience of working in with new ‘materials’ is very useful.  Just remember the gap that exists between experience and expertise.

ii – The making is part of the story 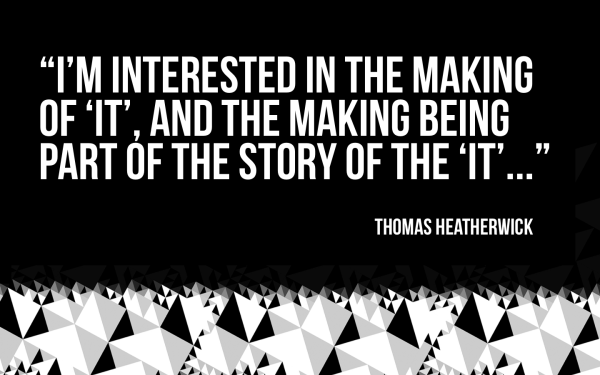 This obviously chimes with a big part of the Make Things People Want manifesto which is increasingly the way I talk to people about what Smithery does, or can help them do.

Here Heatherwick was talking about the way they worked with the Haunch of Venison gallery, and involved the director there, Rebecca Davies on the journey of projects and ideas, rather than just display it at the final stage.

She said that she was just ‘market research’ for them, she would react to the pieces which would give them an idea which parts were right, and which parts needed more work.

It’s an increasingly valuable way to think about products and the marketing of them, I think.  The fear is still there in a lot of companies that if they show people what they are doing too early, competitors will see it and steal the ideas.

My personal point of view is that if a competitor has so little creativity of their own that they’re sitting waiting to copy your ideas, you’re probably not going to have to worry about them for long anyway…

So things arrive in the marketplace in their final form.  But if something is finished and unchanging, there’s not going to be a lot to say about it.  Which is why a lot of companies struggle to talk about products – “we need new content!” cry the social marketers, “because that’s the way we communicate now”.  Which means investing a whole lot more money in inventing content around products and companies.

I think as the decade progresses, we’ll see a shift from  companies who look at the way that the likes of Supermechanical have documented the story of TWINE, and start building in making that is part of the marketing.

iii – What is the communications equivalent of Tessellation?

There is a repeating theme in the studio’s work of tessellation – “a way of introducing complexity and richness to the monotony of right-angled buildings“.  This is achieved in all sorts of different ways; tiles, cladding, mesh, crinkled steel, and so on…

The problem it solves is a challenging one – how do you create something that works in the same cost-effective way as mass production does, so you make the same thing again and again, so you’re not hand-carving every inch of the building to make it look interesting.

Now, think about this in a communications mindset.  Mass media is mass production – make one thing (TV ad, poster etc) repeat endlessly, but in the modern marketing pantheon are the equivalent of the monotonous right-angled building.

But the ‘social campaign’ approach is the equivalent of having medieval stone masons carving out every message… the human cost of having all those people working constantly to create new messages stacks up.

So what does tessellation in this context look like?

I don’t have any answers yet, mind, but it’s an interesting problem to ponder…

iv – What is innovation?

A final quote, from the Head of Innovation at the studio, Stuart Wood.

I found this in my notes, it’s from one of the audio posts, and I believe he was talking about what innovation means in the wider context of what the studio produces… 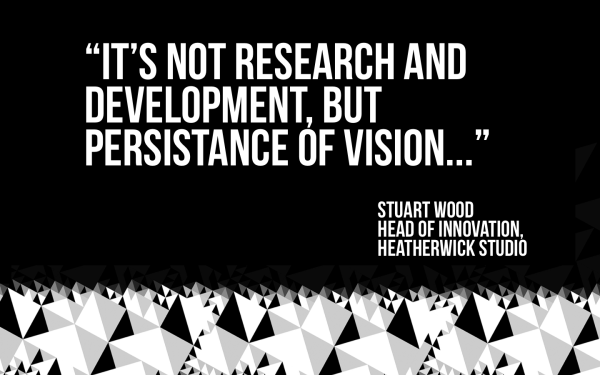