I get the feeling that the Olympics are going to throw up lots of interesting talking points over the next few weeks.  Such as this: 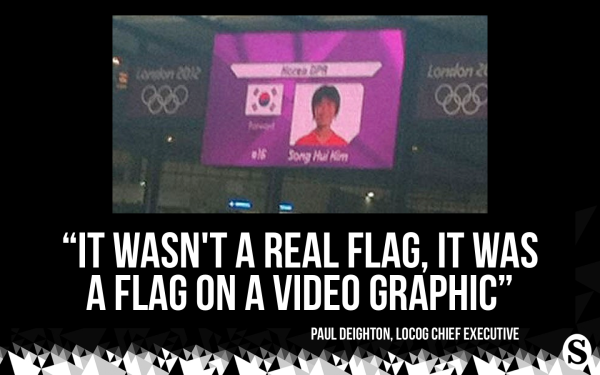 That’s LOCOG Chief Exec Paul Deighton apologising for the South Korean flag being shown next to the North Korean players’ photos on the big screen at Hampden Park last night.

And he does say ‘we made a mistake’, which always good to see.

But then adds that interesting caveat:  it wasn’t a ‘real flag’.  Does that matter?  Why does that matter?  Do the atoms of a cloth South Korean flag offend more than the pixels of a digital one?

Because the flag no longer ‘exists’, should the offence diminish?  Would a cloth flag have trapped the offence for longer, woven that offence into the fabric of its being?

There’s a lot of interesting stuff happening around this space at the moment.  I don’t want to start a long ol’ exploration of that just yet.  But this recent piece from Mr Bridle is as good a rabbit hole to fall down as any…

“This division, between online and off, is a mental illusion, one we propagate to keep ourselves sane for lack of better metaphors”