Some amazing news first… a few weeks ago, I started banging heads with the guys at Gravity Road and Atom 42 on an very exciting pitch; growing the The Huffington Post in UK.

The ties go back to PHD, of course; some of the founders from each part of the triumvirate (Mark Eaves of Gravity Road, Andy Atalla of Atom42, and myself) used to work together at PHD on various accounts. It’s a little bit Blues Brothers… getting the band back together. I’m playing the strategy keyboard and innovation glockenspiel, Gravity Road are on creative trumpet and content viola, and Atom42 are rhythm planning and search drums.

Anyway, we only went and got appointed, which is very exciting indeed, because we now get to deliver the strategy and ideas we pitched. We were up against some very good agencies I have a lot of time for too, so we were even more pleased with ourselves (a feeling that can only ever be allowed to last until the hard work starts).

I’ve just had the first printed Artefact booklet through the post from Tim at Artomatic this morning. I’m delighted with it, I can’t stop flicking through it. Lovely thick card and very, very black ink. It’s like staring into the untempered schism.

The booklet is an A6 introduction to Artefact Cards, a concise 16 pages, something to pick up quickly and get ideas on how to use them. It’ll ship inside the first 100 kits which are on sale now at http://shop.smithery.co (the first half of which have disappeared already). 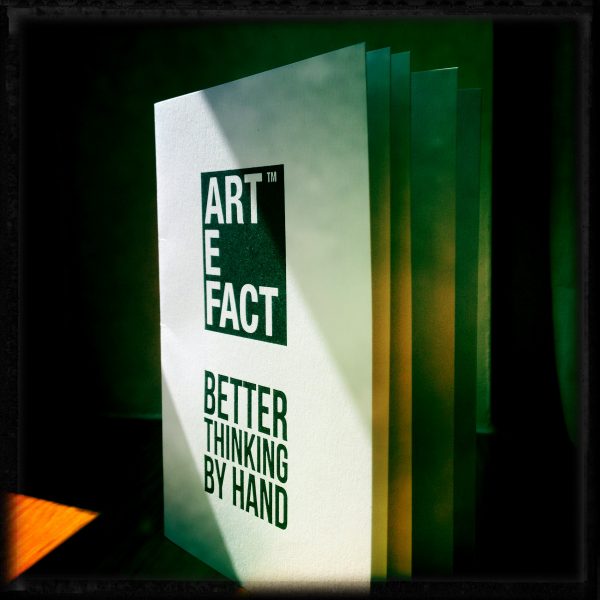 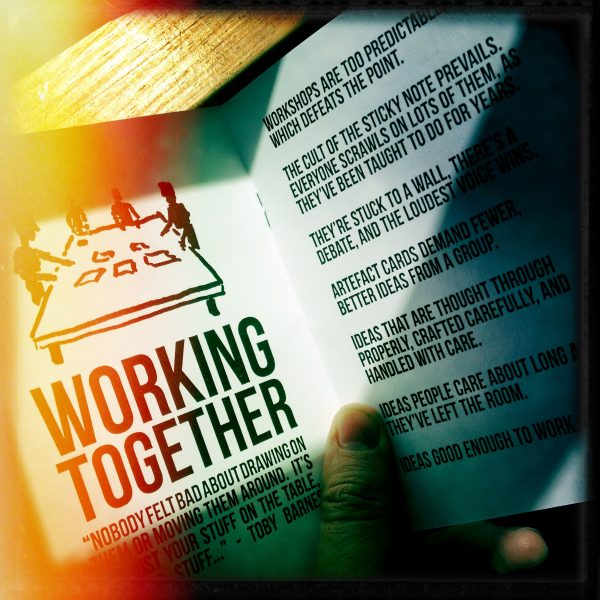 We could have done it simply as a digital or lithograph print job in any old printer in London, of course, that’d have been simpler, quicker and cheaper. But given that the good folks down at Axminster Printing Co who’re making the Artefact Cards themselves have a lovely letterpress machine, it seemed rude not to use that. 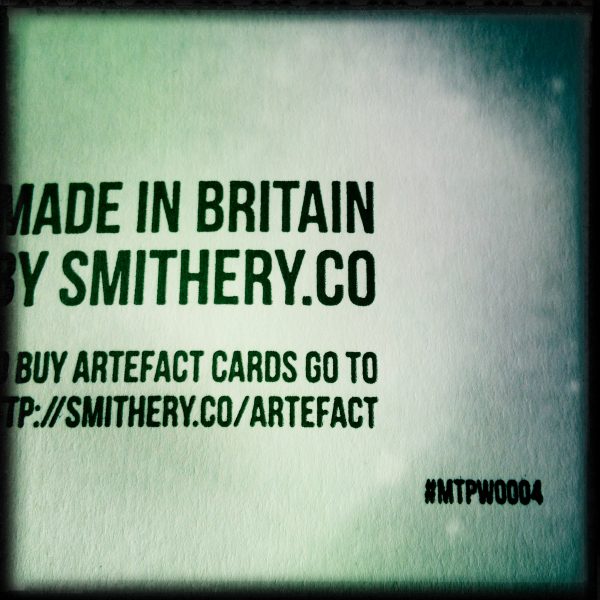 It did mean that I had to be extra careful when writing the copy, and putting it together in Adobe InDesign (which I’d never used before, but ten years of hacky PhotoShop experience meant it was easy enough to pick up). Because with letterpress, you’re making something that’s going to be hewn for eternity on letterpress plates (read more on those here). You’d better be sure you mean what you write.

I’m now trying to work out the next steps to sharing the ideas behind Artefact Cards. 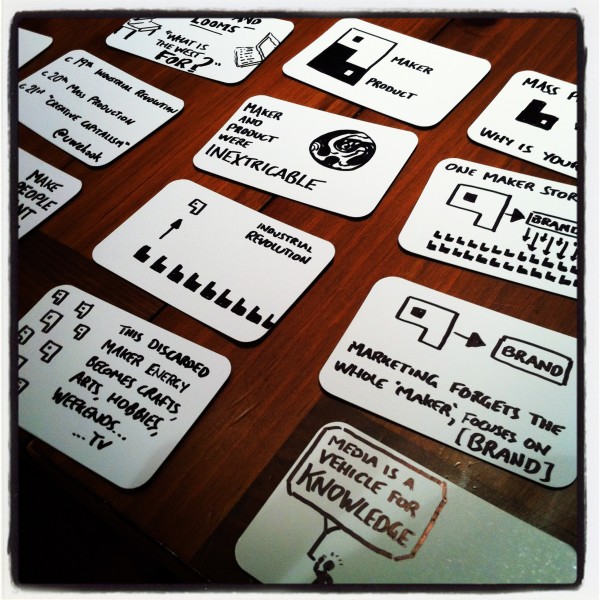 They’re not an easy thing to ‘get’, largely because they seem unlike any of the ways that people tend to work nowadays. Although as Neil Perkin pointed out to me, they are cut from the same cloth as cut-up technique, as used by Dadaists, William S Burroughs, David Bowie and more.

The short form booklet works when you have them. I’m writing the long form manual (version 0.1 was generally well received and useful, it seems) for iPad & PDF. I’d a lovely note from Joe Fry at Google suggesting that a video of them in use is probably a must-do (I know he’s right, too, just haven’t got round to it yet.).

The good thing is that in the testers, contributors and first customers of Artefact Cards, I have a what Leo from Buffer was talking about in his post about ‘the first people using your product’…

“A common misconception I found is how first time founders think about the first users that will sign up to their product. Most, seem to believe that this is your one chance to WOW people signing up with a stunning new experience to change their lives forever.

They believe it is regular Joe signing up. He is expecting to build your product into his every day workflow, stomping off angrily if he finds a bug and the product isn’t working as expected. The truth is, regular Joe won’t sign up. He won’t sign up for quite a while. Only after he has seen your product 7-10 times, read articles about you in the press or several of his friends recommended him your product. That’s when he will take a look.

Instead, the kind of people who sign up to use your product when you first launch, are a very different kind. They are fascinated by newly built technology, helpful, friendly and want to give you feedback. They expect bugs, will make feature suggestions and eventually become your raving fans. They are your visionary customers.”

It scares the shit out of me when I think about shipping the first sets of Artefact Cards out in early July, but reading that post made me realise that’s fine and natural and the people who get them will just help make them even better.

Lastly, we’re waiting on the imminent arrival of our second child… which, as I write this, is already three days later than the date they gave us said. Come ON, baby, they gave us a DATE, does this mean nothing to you…?

All very exciting though. But I may be a lot quieter than normal for a bit, and at short notice too.