(This is Part III of an ongoing series: Part I here, Part II here) 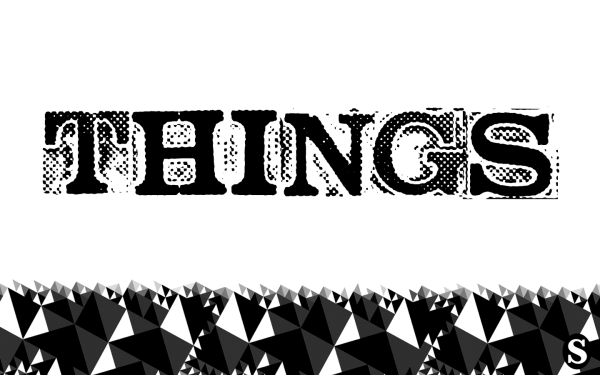 What do marketers know about making things?  Marketing folks and their agencies are simply the airy-fairy brand whisperers, are they not?

They don’t like getting their hands dirty with the nitty gritty of products and services.  They’d much rather talk about brands as if they are some floating, mysterious gas or spirit, as they’ve done endlessly over the decades…

“[A brand] is a complex symbol that represents a variety of ideas and attributes.  It tells the consumer many things, not only by the way it sounds (and its literal meaning if it has one), but, more important, via the body of associations it has built up and acquired as a public object over time”

Perhaps marketers have had a tendency to forget at times that they’re welded to a thing; a product, a service, something definable and describable.

The thing that they’re supposed to continually add more value to, so that it can be sold at a higher price over a longer period of time.

Whilst thinking about Make People Want Things beats Make Things People Want, I’ve found it helpful to think about things as having two parts to them; substance and essence. 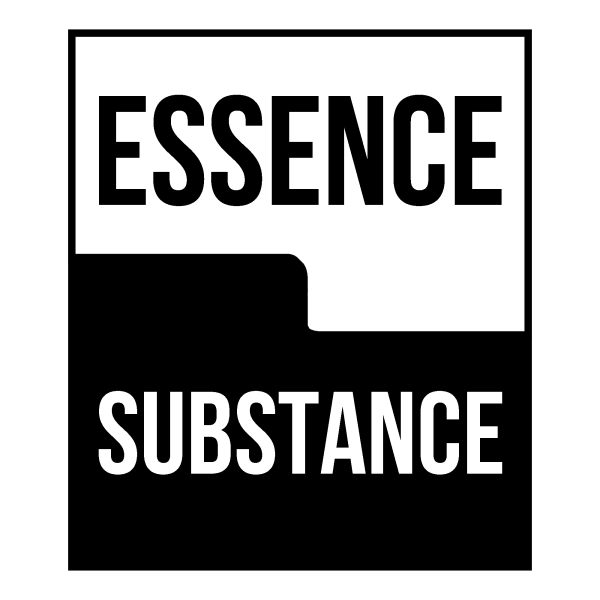 Substance is about the atoms of a product, or the seconds spent with a service.  It is the concrete reality that everyone’s experience would identifiably share.

Essence is more akin to the feelings around that thing; the people who made it, the other people who value it, the more abstract attributes that attach themselves to the concrete realities.

I’ve been thinking about this construct operating over the three eras Yochai Benkler describes in Wealth of Networks; pre-industrial, industrial, and network.

In pre-industrial times, the essence and the substance were essentially the same thing; one was inextricable from the other, the maker and his or her product were one and the same.

Think back to Antonio Stradivari from the previous post; as soon as he departed this earth, the things produced by that workshop lost a crucial something, and the business eventually died.

Then, in the industrial era through mass production, we discovered  the ability to endlessly replicate the idea of one maker.

In a way, the essence was stripped from the substance of his first product, duplicated and attached to every unit produced.  That duplicated essence evolved into the ‘brand’, especially when the original maker was no longer around.

It’s a little bit Cold Lazarus, in some respect: companies seeking to make a fortune by broadcasting the ideas of a long departed mind. 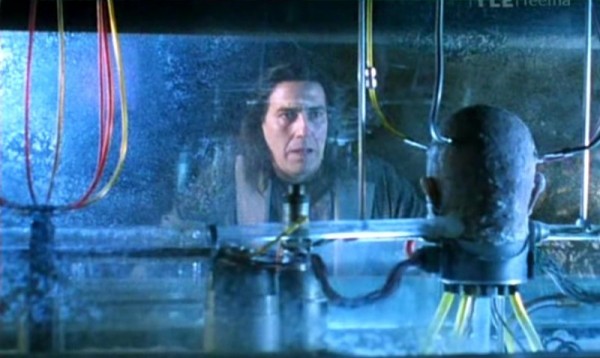 Now, the skill and the art behind that form of branding is compression.

Take the complexity of everything that happened in the creation of the product (the experience of the creators, the materials sourced and used and so on) and turn it into something that worked as a replicable pack, or within seven words on a poster, or in thirty seconds in television.

Simplify and transmit as quickly as possible.

And whilst it started being a technique around simple packaged goods, over the last thirty years the art of brand compression has crept into just about every sphere we can imagine, by and large because marketers and agencies encouraged it:

“It’s still early days: the word “brand” is still associated mainly with packaged groceries.  But there are signs of hope.  In the dark recesses of the human mind, in the city and amongst accountants, it is becoming apparent that the traditional balance sheet is giving a very partial view of a company’s worth.”

They were right to do so, perhaps, in the world they could perceive; in a stable market where your options for broadcasting were TV, Print, Posters & Radio, there was no reason to think that the same powerful branding techniques and tools could be used to continually add value to the things that had existed for decades.

Then, as we know… 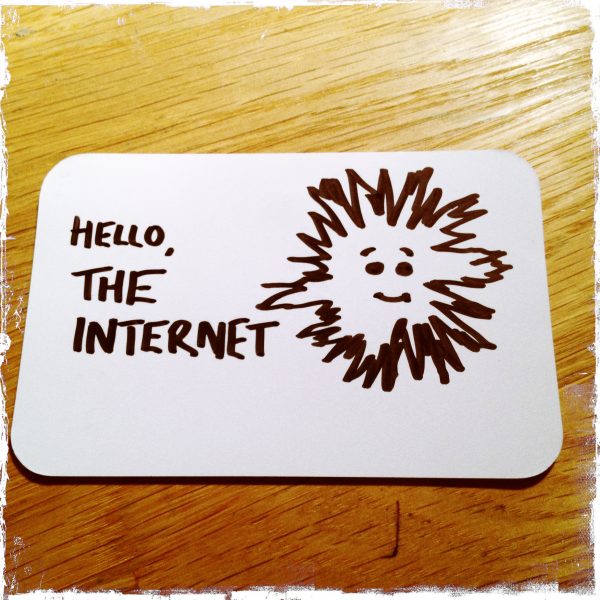 Everything about the world changed.  You might have noticed.

Yet the techniques and tools around branding, around the essence part of anything, have by and large remained the same; focus on compression.

The thing we thought of branding itself as being has become substance and essence in messy, unending flux.

How do you apply the compression, consistency and simplicity to a brand when it seems that every time you blink everything about it has changed?

If you follow such matters, yes, the visual is a nod to the New Aesthetic, specifically thinking about a form of brand planning that only robots can see and make sense of.  That rabbit hole is explored more throughly here, and here…

In short, think about the complexity around their products or services that any company or brand can now look at, instantly, virtually anywhere, in real time…

How do you process the fact that you’re meant to be looking after a neat little brand onion with four words in the centre in the face of that?

Now, in reality, there has always been a constantly changing, organic nature to the substance and essence construct.

It’s just that the internet has allowed it to be supercharged, with the myriad forms of expression we all now have in our lives.

Additionally, our brand tools and techniques were never really that dynamic; compare the verbatim quotes on a quarterly brand tracker with the daily tweets for the same brand.

Rather than fight against the complexity, we’ve really got to embrace it instead.

“We are born of complexity, shaped by complexity, and interact with a world that is inexorably growing more complex.”

Bud Caddell, What Consumes Me

We can embrace complexity because we no longer need compression for a brand.

Where once we had to squeeze everything down to 30 seconds, we can now stretch anything out as wide and deep as the internet allows.

It gives us an opportunity to reframe the way we think of adding value through essence to the substance of products and services.

I’ve talked about two ideas around this before, the Labour Theory of Brand Value, and Story Quarry, which it’s worth bringing together now.
—————-

The labour theory of value takes its roots in the thinking of Adam Smith, and is evolved by Karl Marx.

It’s the idea that a thing is worth the sum of the labours it took to create it in the first place.

(You can see why Marx liked it; it’s a great idea to protect the worker, if the efforts of his labour can only ever be sold for what they’re “worth”, as opposed to what the market dictates.)

It eventually falls down when modern economic reality determines that somethings only worth what people will pay.

Which of course is why brands evolved as discussed earlier; to add as much value as possible to the essence on top of the substance.

And the way that the brand would be developed would be by paying a trip or two to story quarry.  Story quarry is where you go to dig up interesting things to use about a company or brand in its marketing.

By and large, because of the need for compression and simplicity demanded by a mass media world, you would go and look for the biggest, chunkiest big of marble you could find.

Why?  Because you were after something with which to make big, impressive, inspiring things to look at, which a lot of people would find the same sort of value in.  Essentially you were trying to craft the essence to fit on top of the substance, and drop it down on top. 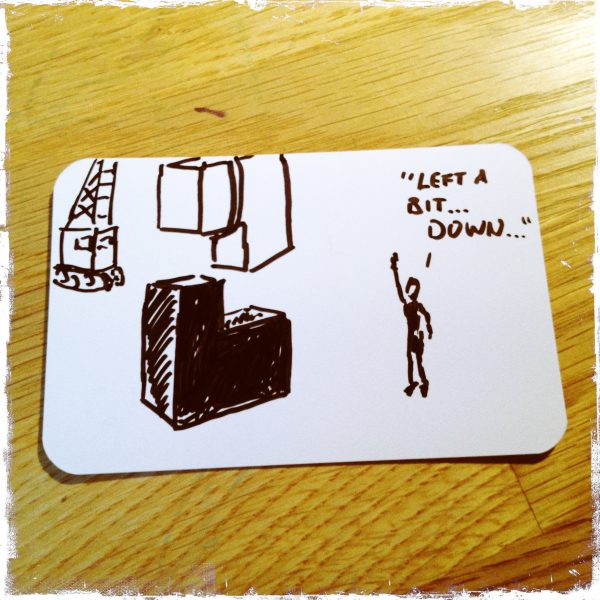 The thing about a story quarry though is that it’s made up of all sorts of interesting things.  It builds up, layer upon layer of strata, a complete history of everything you’ve done. 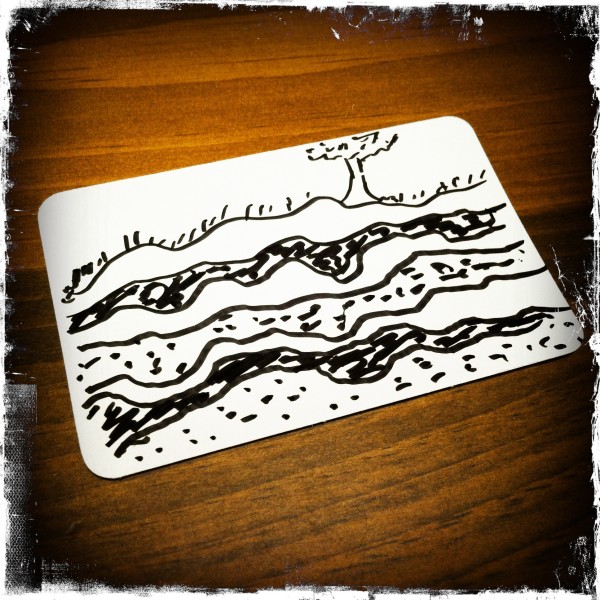 Nowadays, you can show people all the parts of your company you threw out of the story before that didn’t make it in because they weren’t big enough.

Where you sourced raw materials, how you processed them, how does what in the factory, little stories that happened in the making, what you do with the money besides make more of the thing… make everything that comes out a talking point for people who’ll care.

All of it adds up to the labour theory of brand value; constant, tiny, incremental layer-by-layer additions to the essence and the substance.

Matt Webb’s post on Instagram as an Island Economy is a great read to understand how value (and what value!) can be created in such an incremental, piece-by-piece way.

“This idea of labour being hidden in things, and the value of things arising from the labour congealed inside them, is an unexpectedly powerful explanatory tool in the digital world. … When you start looking for this mechanism at work in the contemporary world you see it everywhere, often in the form of surplus value being created by you, the customer or client of a company.”

I could probably endlessly exemplify this line of thinking at this point, because there are so many interesting and diverse companies around on the edges of industries that do this.

So let’s just talk about Field Notes, which I think I first came across at a Playful conference perhaps… 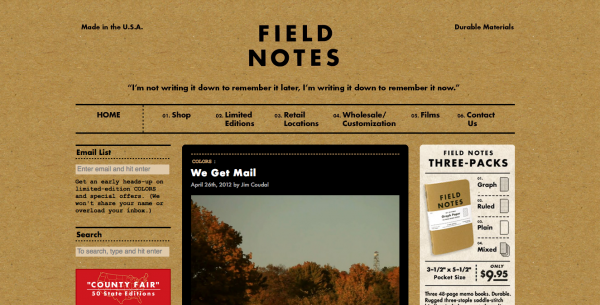 In an age when everyone walks around with one, or two, or even three devices that could theoretically replace notebooks, we’re drawn to ones that we love more than ones that offer pure function.

Field Notes is a US brand of notebooks who effortlessly demonstrate the labour theory of brand value, the continual additive approach to building a layered approach to the substance of what they make.

Their films that they make to coincide with each special edition release are a great example of how to use the endless space of the internet to fill your essence with ever more life.

Watch this one, perhaps, where they talk about their original inspiration, the US farmer’s field note books:

Every Field Notes customer could spend a lot less on very similar note pads, if you were just comparing them at the substance level.

But it’s the essence of Field Notes that makes them more valuable.  And that essence is added by everyone who works there, every additional nook and cranny you find to explore in the Field Notes world, and every customer who carries their Field Notes with pride.

I’m not even sure I’d know how to start describing Field Notes.  But I believe in the company, in their products, in their brand (if that’s what it is).

I believe in the things they make.  Because I believe it is true.  And the more layers I unpeel, and discover more delights, the more I believe.

How many household name brands can you say that of?

“The internet is biased towards fact.  People don’t want myths.  They don’t care about your brand mythology, they care about where your product is made and what’s in it.”