If there’s one thing that I wish I’d been at SXSW for, it was The New Aesthetic panel, hosted by James Bridle. 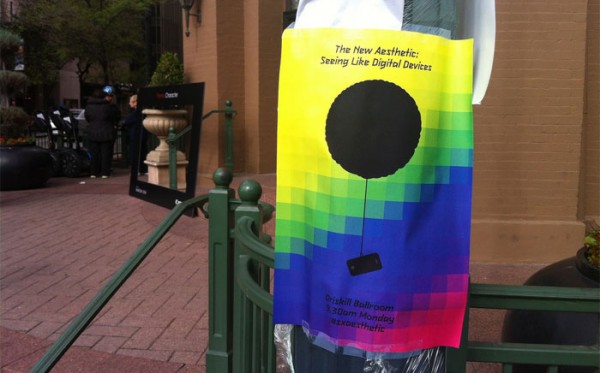 He explains on his write up of the session:

“I opened the panel by talking about the origins of NA, in a frustration at retro-ness (the belief that authenticity can only be located in the past)…

…as well as a real sense that there were new and extraordinary things and experiences in the world, like the ability to see through satellites, which we should wonder at and explore, but instead reduce to the mundane, like GPS driving directions…”

He’d invited Joanne McNeil, Ben Terrett, Aaron Straup Cope, and Russell Davies to give short talks on different facets of The New Aesthetic.  They’ve since posted their talks, so click on their names to see what they talked about.

I spent last night gently soaking up each post, and would highly recommend you do the same today at some point.

Following The New Aesthetic‘s progress as an idea over the last few months has felt like a very vital thing to do, without perhaps knowing exactly why.

In fact, I find it hard to express exactly why, and have aborted a post or two already in trying to find out.  So here goes the third attempt.

It has something to do with what James says in his post –  “[The New Aesthetic] has made me see and think about the world in a strange way“.

I relate a lot to that, but in particular, I now find myself being drawn to the reactions of people to things that (may or may not be) The New Aesthetic, but are certainlythe presence of non-human actors in the world.

This tweet from Andy caught my eye me a couple of months ago: 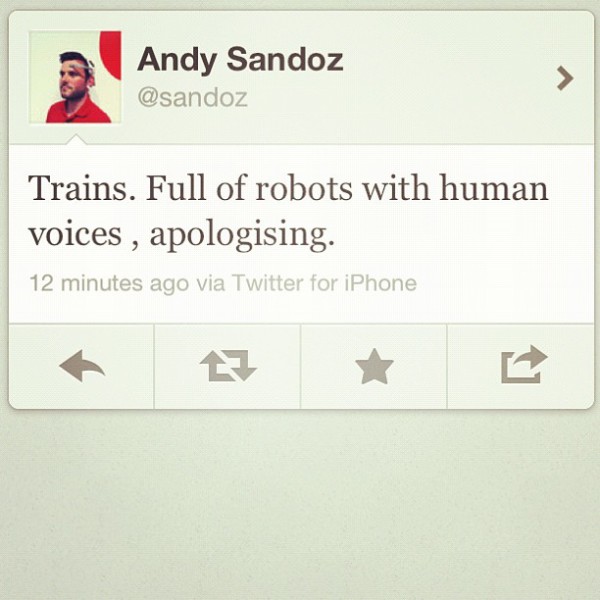 I think everyone probably has that sinking feeling when the ‘cling-clong‘ of the train annoucement system goes off.

It’s kinda weird, a human apologising for not being a connected part of the system, and being an impotent source of comfort as a result.  The driver’s frustration always leaks out into the experience for the passengers – “I’m sorry, Ladies and Gentlemen, but I’ve got a red signal ahead of me and I’m trying to find out what the problem is…”

Do we want robot drivers though?  The idea always makes me think of this:

It’s unnerving, for well documented reasons.  At the Robot Futures: Beyond The Valley event* in December, when Peter McOwen (LIREC) was talking about designing robots now, he talked of actively making things that wouldn’t stray too close to the uncanny valley… “make robots that look like robots”.

As Toby summarises here:  “The ‘wily’ tactic then would be to stay far away from the valley – aim to make technology behave with empathic qualities that aren’t human at all, and let us fill in the gaps as we do so well.”

We’re comfortable with the uncanny valley, waving across the deep canyon at our identifiably robot friends. 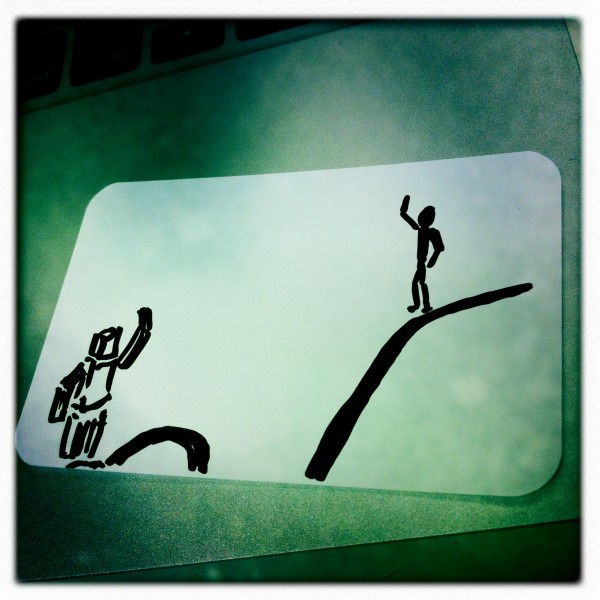 The second example is something this morning that made a few things click into place for; it starts with this response to Iain’s tweet about a named wifi network: 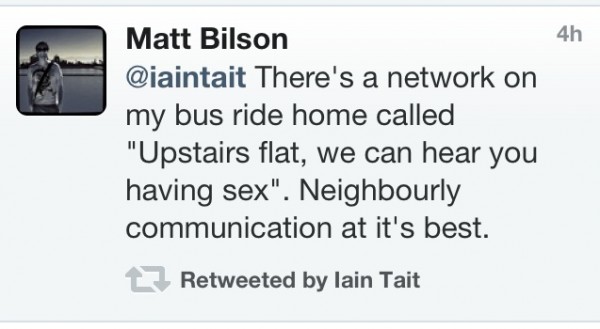 Parts of network stuff are beginning to replace age-old human actions; this is a wifi network name in place of a broom banging on the ceiling.

Wifi network names are becoming like spiderwebs, hanging unseen in the air until you run into them.  They’ve became an informal system of communication, leaving little verbal surprises for each other. 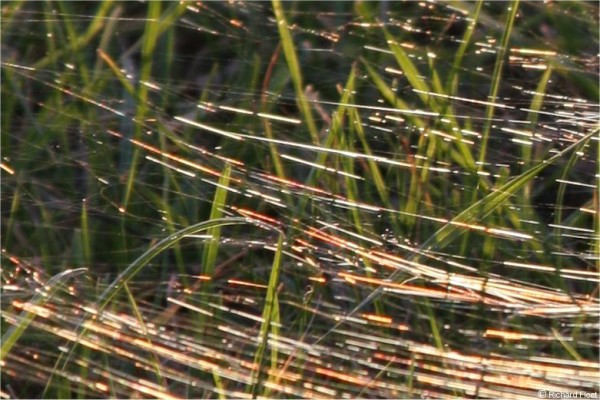 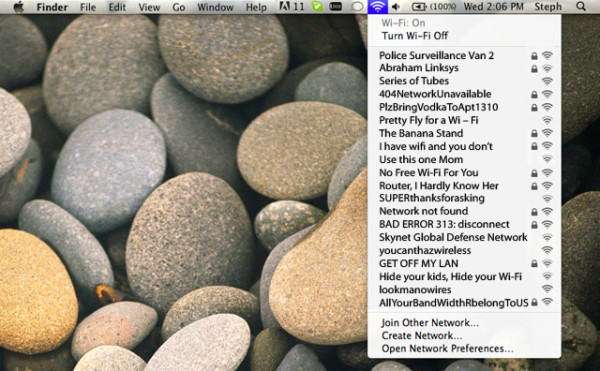 But then they are not just the names we give them.  They are things with function, and purpose, but also with a dysfunctional form of agency; they randomly choose to let you in, kick you off, limit data and so on.  And not always in ways we understand.  We just get annoyed.

There is a long, perhaps tenuous, thread of thinking that takes us from wifi names to the ship minds in the Culture series of sci-fi books by Iain M Banks.

The ship ‘minds’ are the artificial intelligence which have long since outstripped the intelligence of their creators.  They choose their own names, as opposed to being given them.  The names they choose usually express something about a particular Mind’s attitude, character or aims in their personal life.

So Much For Subtlety
Youthful Indiscretion
What Are The Civilian Applications?
The Anticipation Of A New Lover’s Arrival
No Fixed Abode
I Blame My Mother
I Blame Your Mother
A Series Of Unlikely Explanations
Dramatic Exit, Or, Thank you And Goodnight
Just Another Victim Of The Ambient Morality
Well I Was In The Neighbourhood
You Would If You Really Loved Me
Lacking That Small Match Temperament
Hand Me The Gun And Ask Me Again
We Haven’t Met But You’re A Great Fan Of Mine
Now Look What You’ve Made Me Do

Within the books, the ship minds are as much a part of the character set as the more, err, ‘human’ protagonists the reader is meant to identify with.  They are an integrated part of the society.

What makes them fascinating for me is the interactions characters have with these huge machines many, many miles long.  Imagine being on speaking terms with something the size of a town. 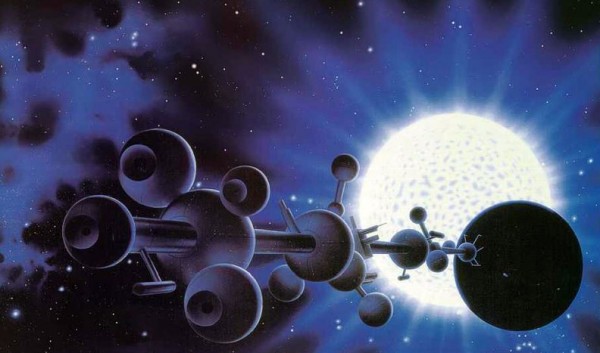 It was thinking about this today that made me realise that’s what’s fascinating for me in The New Aesthetic; thinking about the relationship between the humans and non-humans, and specifically the reactions people have to this new form of communication as part of their relationship with a company.

It might be an evolution from The Communis Manifesto (my IPA Excellence Diploma thesis from 2008).

I used this image below to talk about the different relationships, contexts and reactions that people would have with each other around companies; brands as complex living communities, rather than oversimplified pyramids, onions and all that nonsense. 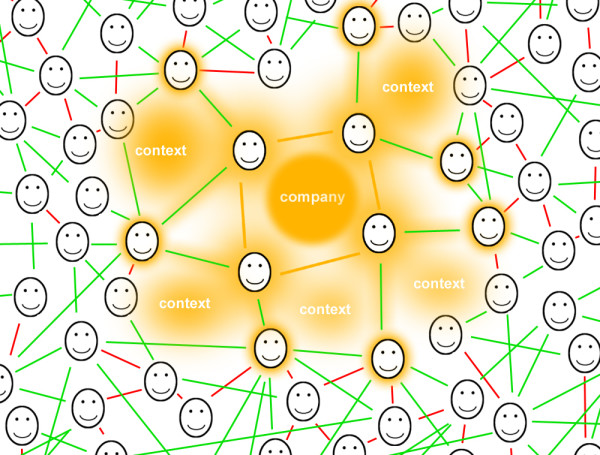 So what does that start to look like when automation (with no agency, just instruction) and robots (with real agency, able to make decisions) start to pop up in that framework? 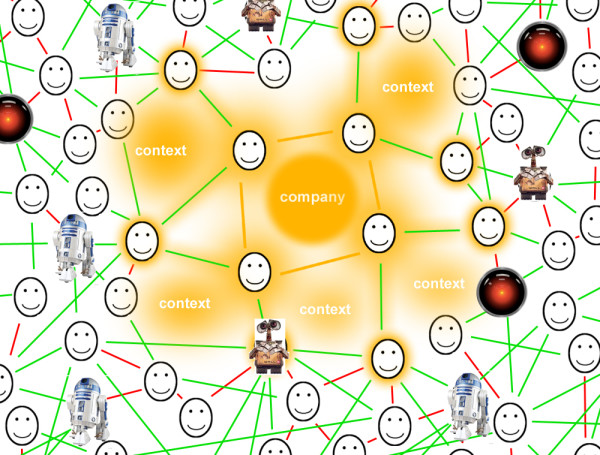 How will people react?  Or will they NOT react at all?  Is the default reaction in the design of communications to keep the robots hidden behind human voices, like on Andy’s train? Why are we so scared to show the systems for what they really are?  To paraphrase James…

There are new and extraordinary things and experiences in the world which we should help people wonder at and explore, but instead we reduce to them to the background and mundane.

Anyway.  That’s where my head is at.

I’m not sure if this is better, worse, more muddled or clearer than my previous attempts to identify why I think The New Aesthetic is so compelling.

* The film of the entire Robot Futures event is up here, if you missed it.  The sound is a bit rubbish, but the talks and debates are well worth listening to: