It’s been a bit quiet on here of late.  Apart from awesome work projects, and a trip to The Story, my brother Andrew and I have been writing a paper on The Future of Planning in 2020, for the Admap 2012 Prize.

It’s been a lot of fun, and reminded me of the pressures and joys of writing pieces for the IPA Excellence Diploma.

It reminded Helen of that too, as she spent hours on sunday proofreading and suggestion a shift in emphasis… “never again…” were the last words she said on the matter.

Anyway, I won’t give the highlights away, but save to say we’ve talked about the shift from Make People Want Things to Make Things People Want, how that can be underpinned by robots taking on a much greater share of what ‘planning’ is currently, and therefore changing the potential of what planners themselves are freed up to achieve.

A lot of it is grounded in Stephen King’s 1989 paper ‘The Anatomy of Account Planning”, in particular this idea…

“I believe in fact that the most fundamental scale on which to judge account planners is one that runs from Grand Strategists to Advert Tweakers.  And that nowadays there are rather too many agencies whose planners’ skills are much too near the advert-tweaking end of the scale”

I’ll share the paper here in full when I can.

In the meantime though, Andrew and I are running a little experiment alongside the essay.

Weavrs, if you’ve not come across them before, are “personality based social-web robots”.  Basically, you can create characters based on various inputs that blog and tweet about where they go, what they experience, and what’s interesting them.

(I’ve been running one called Autosmithery for a while now, and it comes back with a bizarre mix of things, some of which are really on-brief and interesting, and other stuff that is just weird…)

Given the idea behind our paper, we couldn’t resist creating a robot to answer the question ‘What Is The Future Of Planning?’. 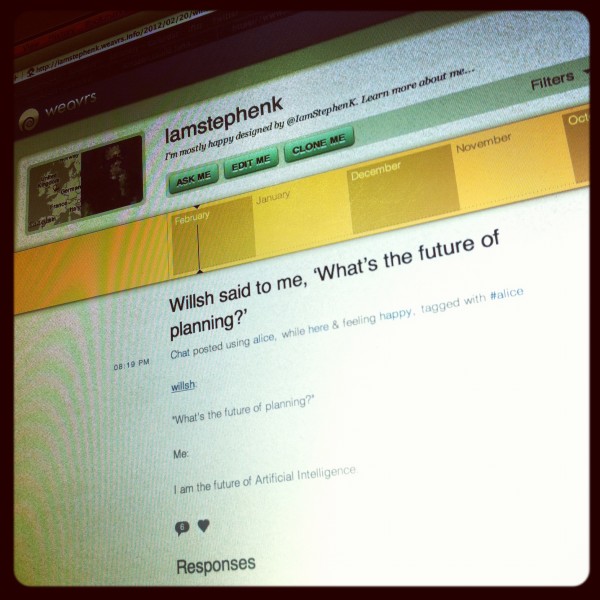 We worked with David Bausola at Weavrs to use the contents of King’s paper and ours as a basic infusion for the Weavr, and then linked it up to some tasty delicious RSS, to see where it goes and what it finds.

A little scarily, amongst the first things it did were choose a refresh colour scheme for the blog called “Corporate Strategy”, find an analysis of the use of multilingual social media, and it found itself an iPhone on eBay… tooling up for the future, clearly.

…or of course on his blog…

It might be useless, it might be amazing, it’ll probably be somewhere in the middle, but at the very least it’ll be very interesting to see what happens.

Thank you everyone else who helped us form and shape the paper: Toby Barnes, Paul Dyson, Mark Earls, Ross Farquhar, Nick Kendall, Karl Weaver… and sorry to anyone I’ve forgotten… :-/