I went to Aldi this weekend, the wee supermarket. 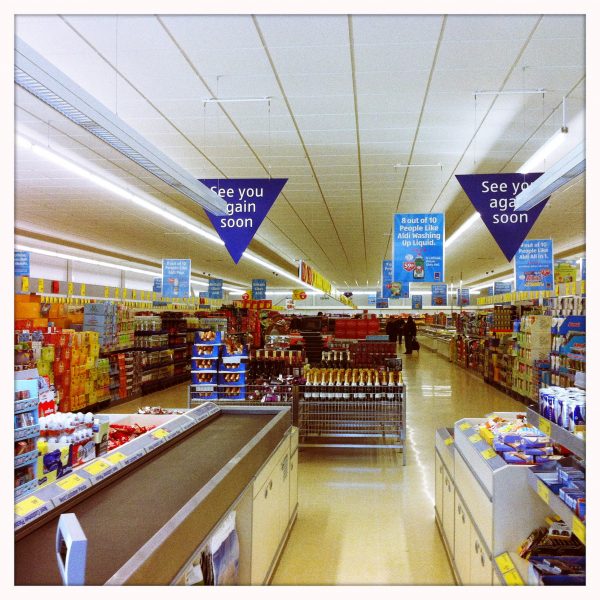 Is it a supermarket? Or a fauxpermarket?

Aisle after aisle of things that look a bit like other things you might buy in other supermarkets. Well, more than just a bit. Quite a lot. 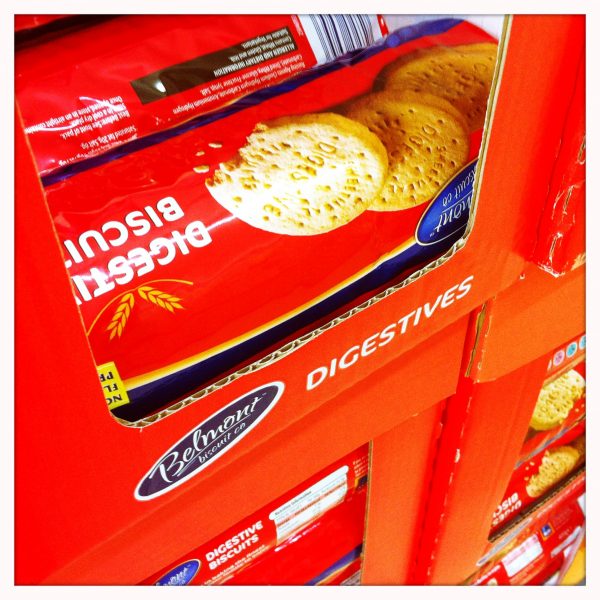 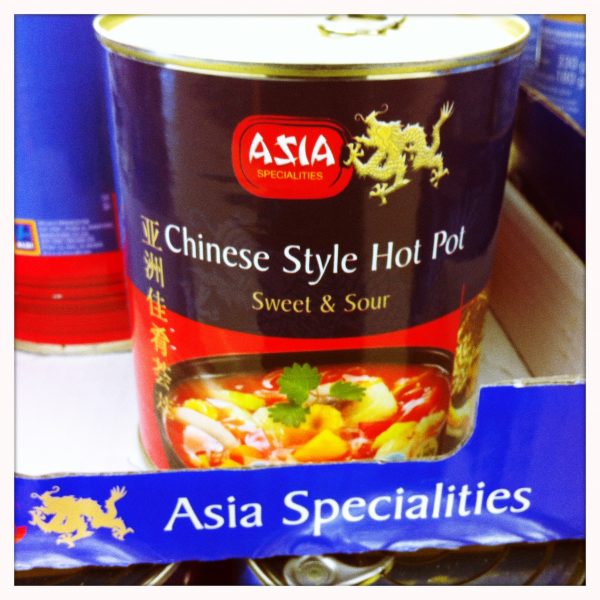 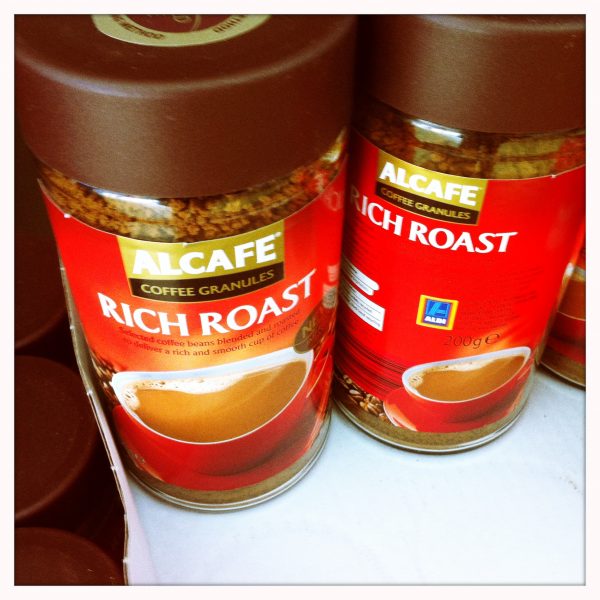 They dip into the memories you have of wandering up and down supermarket aisles all of your life, and create something that tweaks something inside… you’ll like this, it’s ok, it’s for you.

It’s not that they want to build strong, meaningful brands from “Belmont”, “Asia” and “Alcafe”. They let the strength and power of the other brands wash over them.

Squint for a second, and it’s almost McVities.

Which is fine if you’re happy not to build meaning in your own products. But what if you’re trying to build something meaningful yourself?

Should you let something all-consuming wash all over you, obliterating any trace of what you might be yourselves? Like, oh, I don’t know…. 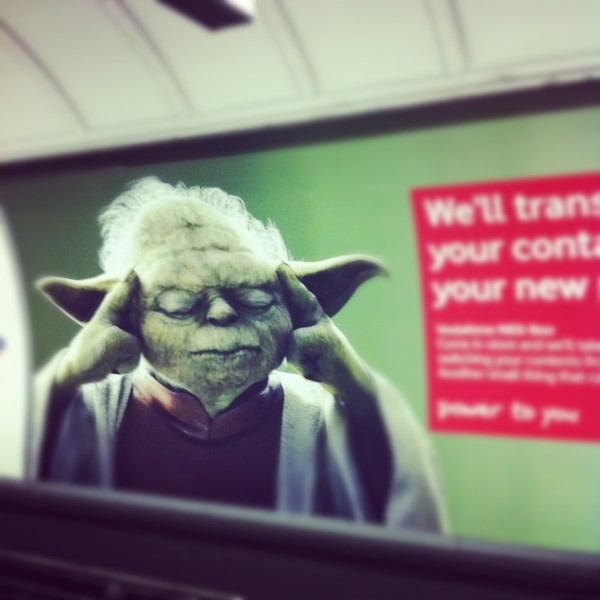 Over the last two weeks, I’ve written and deleted two posts on the continuing sell-out of the Star Wars property to… well, any company that comes calling with an R2 unit stuffed with money.

Yet as I wrote them, I felt it was just anger I’d covered before here and here.

And as we know, fear turns to anger, anger turns to hate… etc etc etc

But as the last week passed, I think there’s two important points to make for brands trying to harness it.

Firstly, strong with the force, this Star Wars is.*

If there’s any property out there that the branding force is with, it’s Star Wars. Everyone knows Star Wars. Which means it completely overwhelms and subsumes anything that might have been you in there.

As such, “Star Wars and…” as a proposition for you is perfectly interchangeable with any of your competitors. Vodafone could be swapped out for 3 Mobile, or T-Mobile, and nobody would bat an eyelid. It’d still be “that ad with Yoda and the phone, and the stupid wasabi line”.

Or to put in another way… 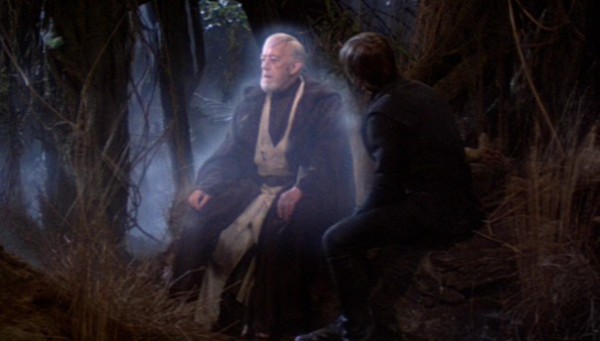 “Your advert… was seduced by the Dark Side of the Force. It ceased to be for Vodafone and “became” Star Wars. When that happened, the thing that was your brand was destroyed…

Point two: Just because everyone knows it, it doesnt mean they think it’s a great.

If the ‘Star Wars’ brand you buy rights to nowadays was the same one that had the world and his brother queueing up outside cinemas for five weeks before The Phantom Menace in 1999, that’d be alright, perhaps.

It’s the Star Wars brand that has become this…

Or it’s moleskine notebooks. Or anything else from the long list of tat that Bethan sent me.

And then it’s this…

Really, guys? Did you ship the whole That’s Life team in for that one, or did Esther Rantzen come up with it on her own?

I’m very aware, of course, that this is just the teaser for the Super Bowl Ad.

But oh look, here’s a sneak peak of what we can expect…

“According to Brian Thomas, general manager of brand marketing for Volkswagen, the actual Super Bowl commercial will “have a hero who is a dog … [who] goes on a little journey involving the Volkswagen brand.” The 60-second spot, which VW plans to release on Wednesday, has a “little twist” at the end, as well as a “Star Wars” theme.”

Oh be still, my racing heart…

It boils down to this, for me: with every additional sellout, the once magnificent entity that once was Star Wars cheapens itself further.

Watching Star Wars sell itself to anyone who comes calling is like going back to your home town and seeing the prom queen turning tricks for kerb crawlers in the seediest part of town.

Yeah, it’s slightly sad that George Lucas can’t get films funded anymore, and so is pumping in his own cash. And yeah, that cash has to come from somewhere.

And it’s tough to swallow if you were a Star Wars fan.

But I’m not really talking as a fan; from a creative and commercial perspective, I really don’t get is why brands would queue up anymore?

Why ruin your own brand with a Fauxpermarket version of Yoda, or Darth Vadar, or C3PO or that other little robot fella?

Squint for a second, and it’s almost Star Wars.

And it leaves a much nastier taste in your mouth than a Belmont Digestive.

*apologies for the poor Yoda mimicry… but if you want a full analysis of how Yoda spoke in the ordinal trilogy as opposed to the prequels (or for that matter, Vodafone adverts), then click right here. (via Ed Sludden)

**and apologies for generally taking the whole Star Wars thing, riffing on it badly, and generally polluting a part of your inner child that once stood for something nice.

Mind you, I’m not the first one who should be apologising on that count, perhaps…