This was the last of the business cards I had with the smiley faces on them.  I just slowly tore it in two, fascinated by how the card separated. 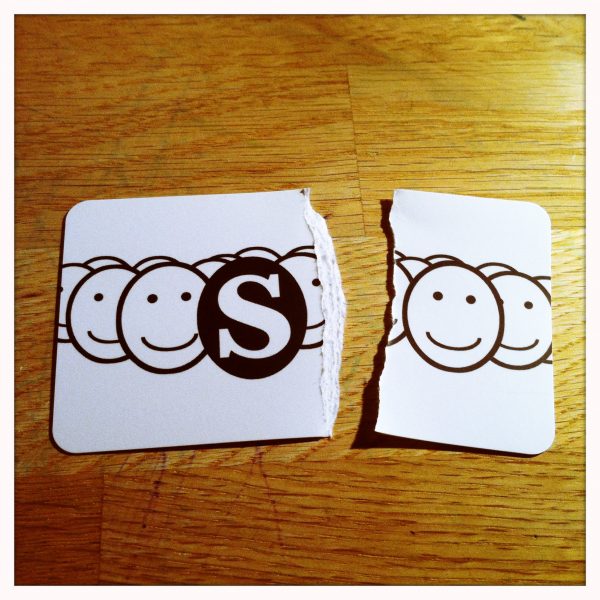 I’ve been using them since I did the IPA Excellence Diploma course, most specifically in final thesis, The Communis Manifesto.

And looking through slideshare, they’re in just about every presentation I’ve done in public since, well, whenever.

Which is why I used them at the start of Smithery,  to some extent, as they were a recognisable transfer of “that weird Scottish guy at PHD” to this.

But I don’t think I need them as part of the identity anymore.  I’ll still use them in slides, largely because I’m not going to sit and recreate all the slides I still use with the smileys in there.

But they won’t be on the site banner, on presentations where logos should be, or on any more business cards.  As I pointed out before though, I do lots of different iterations of the cards with each batch, so by my reckoning there were only ever 40-odd cards with smileys on them.  You might have one, I guess.

It’s a deliberate approach in how Smithery looks and feels to explore what happens when you don’t have consistency, when you just move through versions and iterations and do what feels right on the day.

Matching luggage is so 20th century.  So what’s next?