The main reason is to test out the coffee I just received from eightpointnine.com, a new service that offers you the chance to blend your own coffee, and give it whatever name you choose… 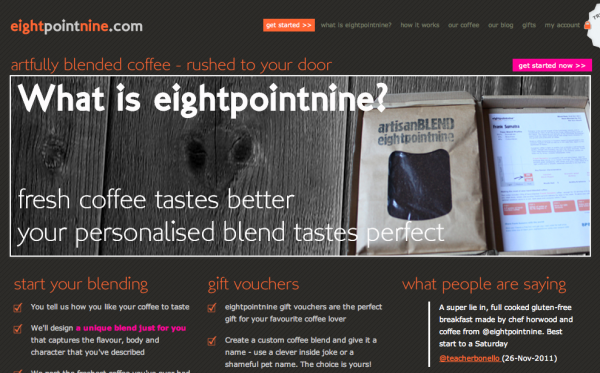 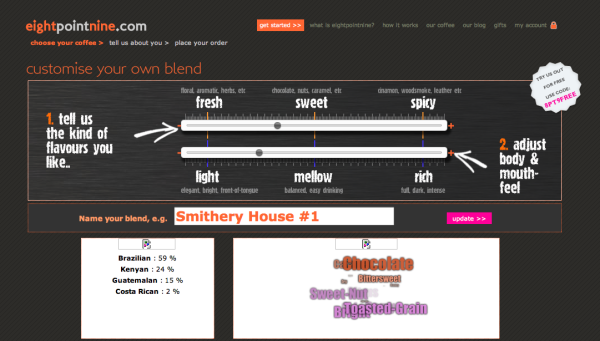 My first attempt at a blend is called “Smithery House #1”.

Now, unsurprisingly, I’m a keen supporter of the general principles around changing the ways goods and services are created by involving people further back down the line (going all the way back to the Social Production thing I talked about in 2009).

But one of the questions it always raises, when you talk about getting people involved in the  is the design and making of things, is the Homer Car question…

…if you get idiots involved, won’t you just end up with something rubbish?

The idiot in question here is me; I know a bit about coffee, but nowhere near enough to be properly informed.  ‘Keen amateur’ probably overstates my competence here.

So how will the eightpointnine.com approach fare in this respect; by letting me sit behind a computer screen, sliding a few things back and forwards to adjust the blend, will the end result be very average cup of coffee?

I set out to compare “Smithery House #1” to some Monmouth Coffee and some Small Batch Coffee.  Naturally, I tried to keep things as constant as I could; for each coffee, I brewed the same amount of coffee in the same amount of water at the same temperature for the same duration, using the same device, an Aeropress (which Mr Barnes jivvied me in to buying). 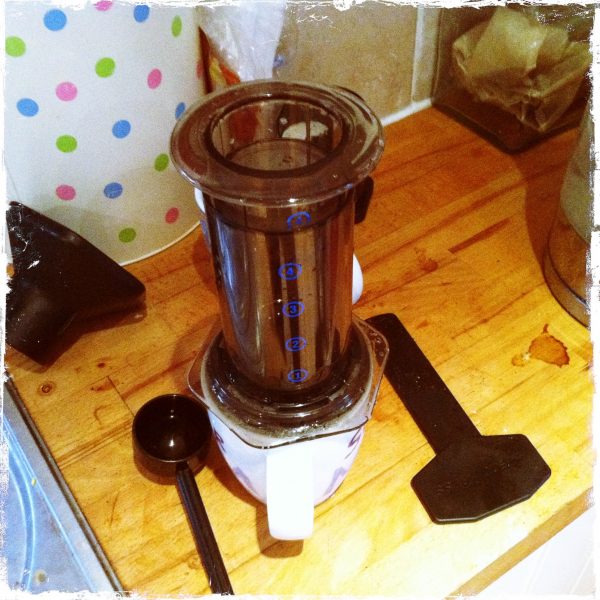 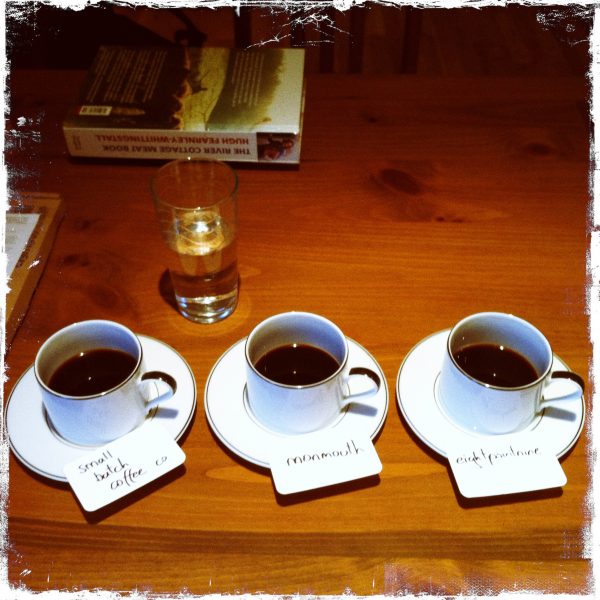 Experiment conditions were far from perfect though; whilst the Monmouth (Brazilian) and Small Batch (Peruvian) were both single origin beans, “Smithery House #1” is a blend.  It’d be better to compare with the espresso blends of each company, perhaps.

The other, much more fundamental problem was the date each coffee was ground; the Small Batch stuff was the last of a bag I’d bought last weekend, whilst the other two had been ground in the last couple of days.

Chris pointed out the importance of freshly ground over Christmas…

…but it never really hit home until this morning just how much it affects the coffee.

The Small Batch, which when first brewed had been amazing, has really lost a lot of the more subtle notes and become a lot more bitter in comparison to the other two.  For that reason, I excluded the Small Batch from the comparison.

The final thing I should have thought about is a blind test; brewed them, then asked Helen to mix the coffee cups so I didn’t know which was which.  Classic Pepsi challenge territory.  So I’m trusting myself to navigate through prior perceptions, really.  Which is an utterly forlorn hope, I know, but there we go.

It’s better because there’s a lot more tastes and aromas to find in the coffee.  It tastes more complex, deeper, somehow.

What’s encouraging though, is that (to these tastebuds at least), “Smithery House #1” is not at all bad.  It hits all the taste profile things it suggested on the profiling information, and whilst it doesn’t have the depth and interest of Monmouth, it’s definitely something I’ve dived back in to tweak and test again (“Smithery House #2” will arrive in a fortnight). 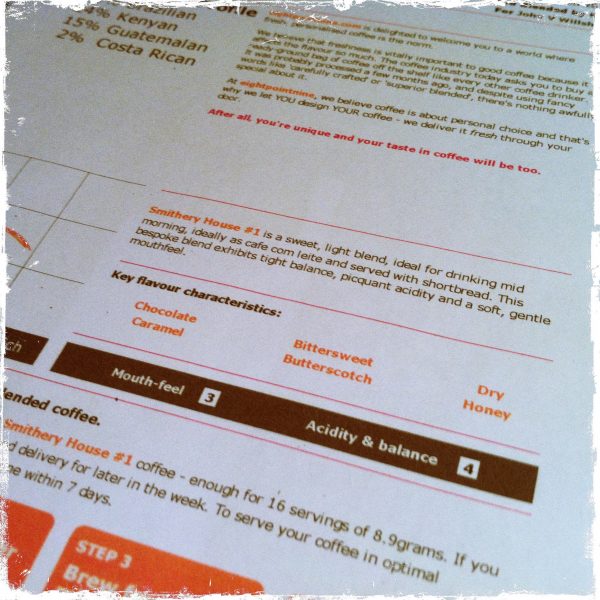 So, apart from demonstrating I can run highly flawed scientific comparisons, what else is occurring?

Well, models like this challenge some of the assumptions around the classic economics of price setting.

“the firm separates the whole market into each individual consumer and charges them the price they are willing and able to pay.  If successful, the firm can extract all consumer surplus that lies beneath the demand curve and turn it into extra producer revenue (or producer surplus).  This is impossible to achieve unless the firm knows every consumer’s preferences and, as a result, is unlikely to occur in the real world.”

For instance, ‘traditionally’ you start by setting one price for your product (on the y axis, £) and selling a set number of units (x axis, U) at that price.

You find the price where you maximise revenues (the dark area under the graph) at a set point on the demand curve. 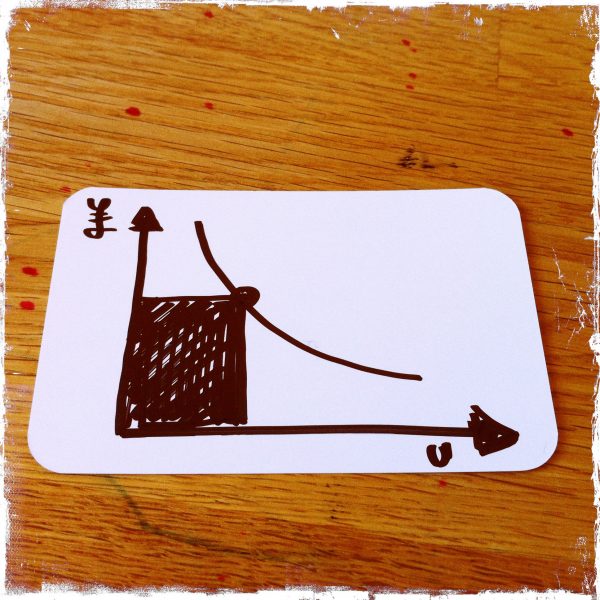 Perfect price discrimination would allow you to sell your product to everyone along that demand curve. 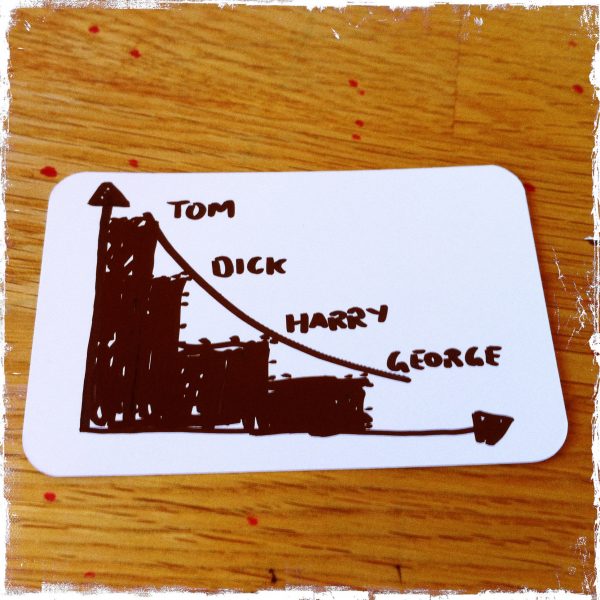 If you could operate some form of price discrimination though, you’d sell Tom a bag at £10 (£4 profit) and Dick a bag at £8 (£2 profit).  You’d make more profit than before.

Now, if you’re after growth of market share, you might decide to sell Harry a bag at cost (no profit), and take a loss on a bag to George (£2 loss).

You’d be a bigger player in the market, hope to persuade Harry & George you’re worth more, and yet you still make the same profit as it you’d set one price and sold two bags.

Now, in this traditional line of thinking, the product you make is a constant, because mass-manufacture demanded they were constant, and there was little point thinking about products any differently.

But maybe (MAYBE) a model like the eightpointnine one means that the product can be the variable, whilst the price remains the constant.

But if you allow everyone to select the taste they wanted in a coffee, you start to head towards a place where you can operate Perfect Taste Discrimination.

You could a constant price which allows you to run the service that can supply everyone with their precise variation of the product.

Not only do they get the version of something they themselves like better, but you hand the marketing story of that precise iteration over to them, to talk about however they wish (much like I talked about “Smithery House #1” above).

I need to sweat this a lot harder, of course, but as an initial train of thought, I think it’s quite interesting.  It’s certainly good to revisit and test some of the assumptions around the social production things.

And it can help develop more interesting and compelling reasons for companies to connect with people around creating interesting things together, rather than simply seeing ‘social media’ as a marketing bolt-on to ask people to ‘like’ the things they’re not allowed to change, critique, improve etc etc.

It does occur is that Taste and Price are not mutually exclusive levers to pull upon; any company can use both in combination.  But it is a lot easier for a startup company in the FMCG sector to start with Perfect Taste Discrimination , and price set accordingly, than it is for an established FMCG producer to move into Perfect Taste Discrimination to satisfy a market.

So we could see a lot of challenger companies and models upsetting various aisles in the supermarket over the next few years.  It’s a new sort of disruption, perhaps, and maybe companies like P&G, Unilever and Kraft are the new record labels…

POSTSCRIPT: Should you fancy giving eightpointnine a go, would you mind using code ENKWNSA?  You get the same offer of first bag for free, but then I get a bag half price, which will keep me experimenting more 😉