This is, to be frank, a ramble through some ideas on making things.

Ironically, I’ll be happy if the only thing I make at the end of it is a little sense.

It’s a loose assembly of thoughts, a margarine tub of lots of interesting pieces of LEGO I’ve found down the back of my mental sofa, which might go together well, or at least not offensively.

And it’s in the run up to something called Laptops & Looms, a thing-that-is-not-conference in the Derbyshire hills, being run by Russell, Toby, Dan and Greg.

It’s not a conference. I’m repeating myself because I get the sense this is important. It helps sets everybody’s expectations at the right level, I guess. Not least about what sort of biscuits there might be.

Maybe it’s a bit like a summit. Fittingly, given it’s in the hills.

Though maybe because it’s in Derbyshire, it’s not a summit, it’s just summat.

(OK, that’s Yorkshire perhaps. But it was too good a bad joke to miss…)

So what am I thinking about? Well, two tracks, I guess… the wider issue of living in a country that doesn’t really make anything, and then an interesting thought on how that might change. Might.

Russell’s written this lately, which he’s pointed to as to inform some early thoughts in the run up.

We need an economy that makes things again. And I’m not alone in thinking this. The generation that built the web is tiring of the immaterial and is turning back to objects: to 3D printing, to laser-cutting, to Arduinos. And maybe they can — as with the web — transform hobbies and eccentricities into industries.”

What do we make? You know, as a country, as companies, as people? Well, I suppose the country has been making headlines, all around the world. But that’s hardly proving productive. Unless you make and fit windows.

The great shift to becoming ‘a service economy’ meant we stopped making things. Because it was cheaper to do that elsewhere. And, to a certain extent, Britain suddenly thought making things was, well, beneath us.

God forbid we should get our hands dirty. Except in wars.

No, we’d become a service economy!! Genius. Then the people in charge decided it was cheaper to do the service thing elsewhere, and moved that out too.

The very fact that Plusnet can make such a big deal out of having a call centre in Yorkshire underlines that point.


If you’re leaving school nowadays, and you can’t afford to go to Uni (which will cost you £50k for three years…), well, you might find an office job, or a job in a call centre. If of course they lower expectations and stop looking for graduates for jobs that don’t need degrees.

What’s troubling is that there’s this underlying assumption that everyone’s cut out for the cube. Or at the very least can be forced into that squarest of holes.

We can’t be an economy where everyone sits behind a desk with a screen in front of them, servicing the needs of other people at other desks on other screens. It doesn’t make any sense.

So we do need a considerable portion of the economy doing other things. Making things would be great.

“Oh, but we can’t make things as cheaply as China… we can’t compete…”

Well, maybe not. But cheap isn’t the only way forward.

In my erstwhile meanderings around economics and all the Adam Smith malarkey, I fell down a rabbit hole called The Labour Theory of Value…

It’s started by Smith, goes through a bit of evolution by Ricardo and Marx (it’s a great idea to protect the worker, if the efforts of his labour can only ever be sold for what they’re “worth”, as opposed to what the market dictates), and eventually falls down when modern economic reality determines that somethings only worth what people will pay, and people are only willing to pay for things made cheaply.

At least, they are if they behave rationally. But really it’s how people react emotionally that counts for more, as all the Behavioural Economics stuff holds true.

And I think you can make a case for returning to the Labour Theory of Value through emotionally connecting people to the stories of the labour put in. The manufacture.

Is essence, ‘show your workings’. Tell the complex, varied, and interestingly niche bits of what you get up to.

Which you couldn’t really do before, because conventional advertising dogma for the last forty years has told you that you’ve got to show a happy man in a car racing fast round corners, because that’s what made for the best, most effective telly ad.

People don’t really care about your company, sang the advertising man. They care about themselves, and their unconscious desires… which is all the stuff Adam Curtis pointed out in The Century of The Self in 2002:

Just watch the first minute or so of this, you’ll get the point…

…although it’s the whole FOUR FECKING HOURS in one Youtube video… isn’t the modern world amazing?

So amazing, in fact, that 97% of advertising fails utterly to set it alight; it’s too shallow and unsophisticated.

The ways in which we can tell stories now offers too much depth for flimsy, throwaway projections of ‘how you might feel if you chew this gum’, or can be celebrated by too small and focussed a group for advertising’s clumsy, catchall stereotyping that ‘appeals to all 18-34 men’.

But thinking about the Labour Theory of Value, it occurred that you can use storytelling (and great storytellers) to show people all the parts of your company you threw out of the story before, all of which added up to the value of what you’d made.

Where you sourced raw materials, how you processed them, how does what in the factory, little stories that happened in the making, what you do with the money besides make more of the thing…

Because of the way in which we can tell stories now, can we tell better, real stories of manufacturing companies, that builds in value the the goods produced. Secure that emotional attachment. Make everything that comes out a talking point… 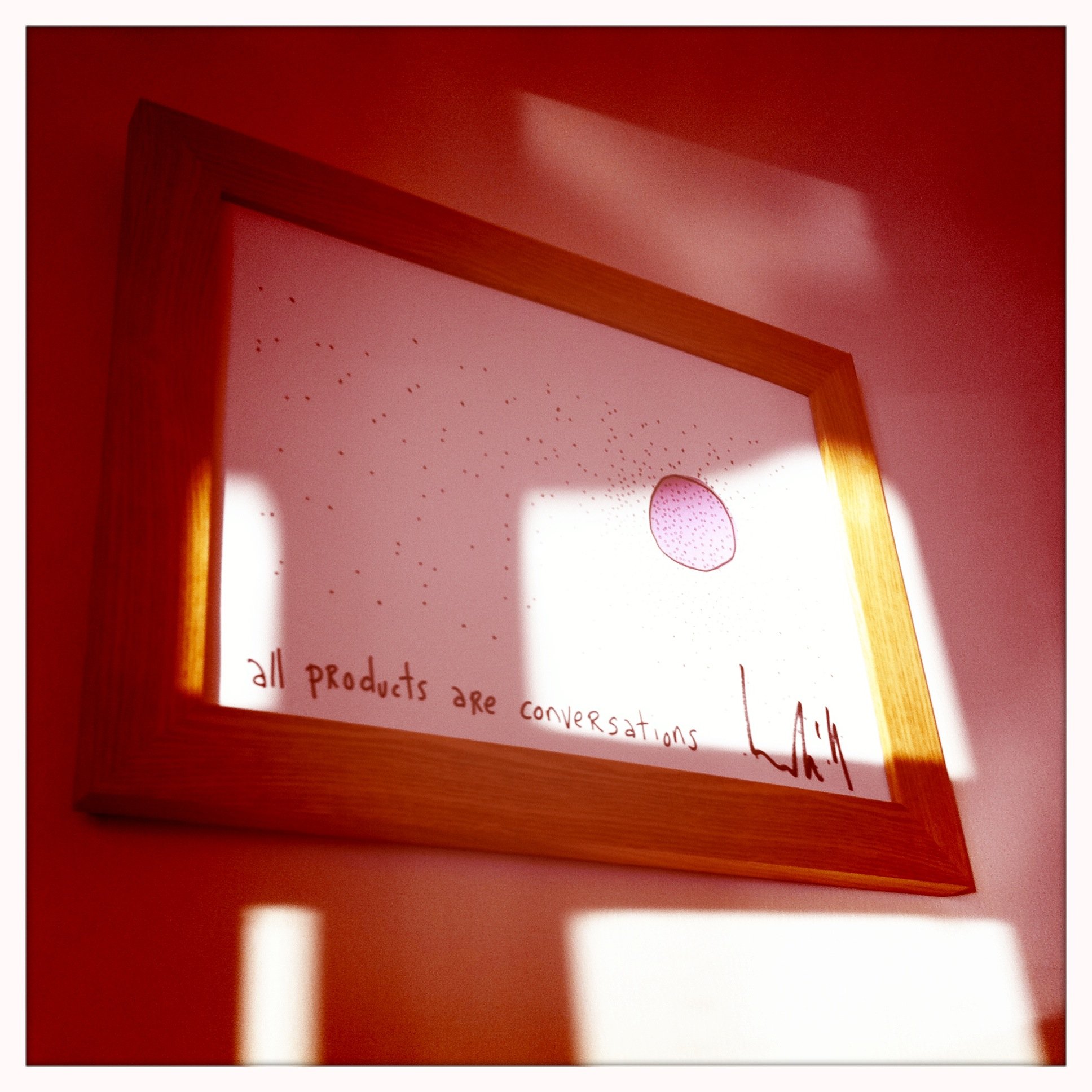 What if you can use the modern world to demonstrate the value of the labour that went into a thing, and reset the value accordingly?

And what if you can do that more ably in Britain, for anyone else who still attaches any sort of cultural significance to things, than elsewhere? We use cultural ability to increase the value of the things we make.

I’ll leave you with an example, from Spain.

How much would you pay for this cycle cap?

It’s nice, and it comes in a nice box.

There’s a CD too, it seems. But still, it’s just a cycle cap.

Now watch this. And when you’re done, think about how much you’d pay for it now, and why that’s changed…


The Bicycle Cap by peSeta for the New Museum from casa peSeta on Vimeo.