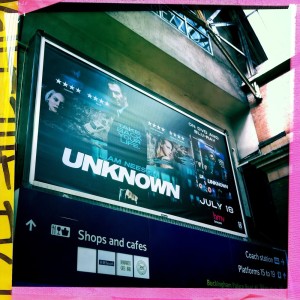 This couldn’t be any closer to the look and feel of the previous Liam Neeson film ‘Taken’ if they tried. The tagline is “TAKE back you life”. See, stupid filmgoers, TAKE is like TAKEN.

And of course, on the other poster, just in case you haven’t got it yet, they use a quote from a review, in words almost bigger than the title itself… “Fans of Taken are going to love this”.

You can smell the lack of inspiration a mile away. That film was popular. So let’s make it again.

They have so little idea what works and why that when something does work, they try and productise it. Use the factory to make something identical.

It’s all depressingly unoriginal, as risk free as a corporate machine can possibly make it.

Hollywood by numbers. Because they only care about the numbers, not what they actually make.