You may remember the thing I wrote on Adam Smith a month back or so… on how the theory of the division of labour wasn’t really working for the agency model at the moment; we’re sold as a manufacturing business, but work as an agricultural business. 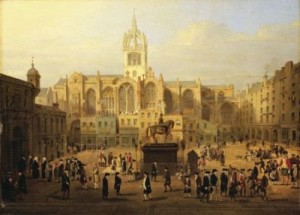 I hand you over to the professionals for a description – no, not Wikipedia, for a change, but an excellent Scottish Government site on the period…

The Scottish Enlightenment was an intellectual movement that ranged across the fields of philosophy, chemistry, geology, architecture, poetry, engineering, technology, economics, sociology, medicine and history.  The 18th century is often described as Scotland’s ‘Golden Age’.

The Enlightenment figures [David Hume, James Hutton,Robert Adam, Joseph Black, James Watt, Alison Rutherford and Adam Smith] were outspoken; they argued that it was vitally important for people to think for themselves rather than simply believing what they were told.  Their ideas were often controversial. In Edinburgh, Glasgow and Aberdeen great thinkers sought to understand the natural world and the human mind.

It’s a big deal; not only did it become the home of progressive thought in Europe at the time (Voltaire stated “We look to Scotland for all our ideas of civilisation”), but with the colonisation of the new world (specifically America), the Scottish Enlightenment had a massive impact all around the world.
But hang on…
…it’s 2011.  Why is this relevant?
Interestingly, something David Hume (philosopher, historian, economist, essayist… my kind of generalist, as Jabba might say) said at the time struck a chord with me on this…
Talking about the Scottish Enlightenment thinkers, Hume stated that they had developed a ‘science of man’, merging a scientific study of how humans behave in ancient and primitive cultures with a strong awareness of the determining forces of modernity.
(yes, thanks Wikipedia this time)
So basically by understanding how people have always behaved (for instance think about the ground-breaking, brilliant stuff Mark Earls has been writing, talking and doing things about for years), and then framing what you learn in the context of modern technology, you’ll get to a much more compelling understanding about how the world works now.
If you want to learn how to get out of the mass media mire, go and read some things about what people did before it existed.
You might just find a little Enlightenment.
PS… I’ll probably come back to a few more things from this stuff in the coming weeks…