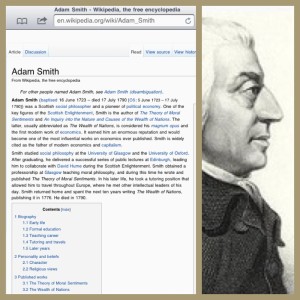 I’ve been revisiting some of my economic past. I accidentally ended up with a degree in economics & econometrics, after going to study english. But that’s another story.

In rereading Adam Smith’s “The Wealth of Nations”, and in particular the first book on The Division of Labour, there are some really interesting parallels between marketing and agriculture. No, really. Bear with me. Firstly, you may or may not be aware of Smith’s principle of the division of labour; “The division of labour, so far as it can be introduced, occasions, in every art, a proportional increase of the productive powers of labour” Basically by splitting work into precise, proscribed roles for people, means you can do much more with the same amount of labour. The (famous) example he uses is of pin manufacturers. Rather than have everyone make a pin from beginning to end, one person draws the wire, one person clips it to length, one person puts the head on, one person polishes it, and so on and so forth. Today, it’s not just a principle for manufacturers, but for service industries too. The machine creates a place for everyone, and works best when everyone stays in their place. Now, Smith states that the division of labour makes work more effective when there are three things in play: i) increasing dexterity from performing repetitive tasks ii) decreased time in passing work between roles iii) use of technology to reduce the need for labour The established model of marketing fulfilled those criteria; clients and agencies, and all the departments and people within each, had distinct roles that they became increasingly more dexterous at performing. They would then pass work along the chain to the next person/division/agency, and everyone would seek to use technology where appropriate to ease labour (e.g. film technology advancements in ad agencies, media flighting tools in media agencies, etc etc). However, it occurred after reading Smith’s simple outline that we’re currently in a very different place. Firstly, our tasks are less consistent, more delicate, intricate and different. Complexity (and you should watch Bud Caddell’s ideas on complexity) means that dexterity is harder to achieve than ever; when the thing you do is different every time, how do you become better at it? Secondly, it’s harder to pass work along, for a myriad of reasons. We are less clear about who does what between client and agency, agency and agency, and even within agencies themselves. There’s a bun fight about who gets paid for what, or at all. And, fundamentally, increasingly complex ideas are harder to pass along a chain of production, because they take longer to explain and pass over. Thirdly, rather than simplifying the ways in which we work, in many cases technology is simply making it harder. We could go end endlessly about it, but the core point is this; advances in technology are there to help what people want to do, not to help what marketers want to do. So, all in all, marketing is failing to fulfil the criteria that makes the division of labour beneficial. But then again, Adam Smith didn’t state that the division of labour worked in every endeavour… “The nature of agriculture does not admit of so many subdivisions of labour, nor of so complete a separation of one business from another.” “The ploughman, the harrower, the sower of the seed and the reaper of the corn are often the same. The occasions for those different sorts of labour returning with the different seasons of the year, it is impossible that one man should be constantly employed in any one of them.” “Country workmen are almost everywhere obliged to pay themselves to all the different branches of industry that have so much affinity to one another as to be employed about the same sort of materials” Which made me wonder; is marketing nowadays increasingly becoming like agriculture as described here? For instance, there is not such a complete subdivision of tasks, hence the confusion in the client & agency ranks about who does what. Also, an individual or group of people are less likely to undertake just one role. Complexity of ideas means people will work ‘seasonally’; move from being the ploughman, to the harrower, to the sower of seed… all to keep the idea moving along, as the idea is hard to pass over in it’s entirety to the next worker. Then, we see all the branches of our industry have an increasing affinity as they are of “the same sort of materials”. Which is why nobody can really claim ownership of the social space, for example… it is what we all do, we are all “employed about the same sort of materials”. Finally, it feels like we often describe what we do (nurturing ideas, growing communities, developing relationships) in terms that are naturally more organic and agricultural.So, if marketing is more akin to Smith’s definition of agriculture, what does that suggest? Well, I worry that we (marketers & agencies) still sell ourselves, or are valued, as manufacturing. And within that, the expectation is that we can utilise the divisions of labour that make that more productive. However, if we are in fact more agricultural in harness, and increasingly more so, we cannot tap the same efficiencies that a manufacturers division of labour would yield. Hmmmmmmm…. thoughts?