We’ve just moved house, to a little rural idyll in Sussex. Not content with changing the geography of my commute, I thought I’d try and change the productivity of it too.

Previously, I’d carry my MacBook Pro and a USB dongle up and down the London-Brighton schlep. The pros were I’d get a lot of work done, in the very traditional sense of things I’d do sitting at a desk. And I’d have all the files I could ever want on it with me. The cons… It’s blooming heavy. So, despite the cries of “it’s a consumption device”, I’m seeing just how productive I can be on an iPad 2 as an alternative… 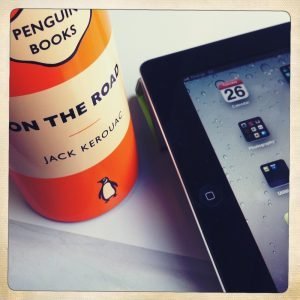 With dropbox, I can still have access to all my files, obviously. But I won’t do so much of the ‘heavy-lifting’ document work… PowerPoint in particular. Though on the first few plays, Keynote for iPad is splendid, so I’ve saved lots of pictures onto the iPad to see just what can be created from scratch.

Going back to the “consumption device” point, I’ve set up Flipboard for my Google Reader feeds, Instagram, Twitter and The Guardian, just so I start reading stuff again. It’s strange, I think, that we often forget to classify “reading stuff” as being productive. I’ve also got the Kindle app for books, and the TED & RSA apps for videos. Plenty of new inspiration to be had from all that. Finally, I can still blog on the move (though I wish Blogsy would hurry up and support Posterous…), write down long form thoughts and ideas (iA Writer), organise myself (well, as much as I ever do) with Evernote, and so on. I actually like typing on the iPad, which I know some people hate, because my typing isn’t that good but predictive text and corrections make me faster. I’ll update on how I’m getting on in a week or so. But I’d love to hear any thoughts on apps you love (or have heard good things about) for the iPad as a work device. At Gulltaggen, Kevin Kelly talked about moving to a future where we carry no devices. For now, I’ll content myself with lighter, better ones.