Last week, I was at the Google Firestarters malarkey organised by Neil and the guys down at Google, and I was asked by Neil beforehand to stand by a sheet of paper with a beer and a pen.

About halfway down the beer, I decided to road-test an equation I’d been thinking about with people…
Yes, an equation.  Rock and roll, huh?
It’s a development on the Verb, Reverb, Amplify stuff I’ve talked about before, and have been refining through talking to people smarter than I about it… If I try and remember you all at this time on a Sunday evening, I’ll miss folk out, so I shan’t… but YOU ALL KNOW WHO YOU ARE.
Anyway, VRA (ooo, abbreviation…) runs along the following lines;
– Verb is the thing a company does
– Reverb is the reverberations of that action across social media spaces (twitter, facebook, blogs… the ‘oooo, did you see what they did’…)
– Amplify is when you take the story of what you did, and the reaction to it, and turn that into stories to tell through advertising.
Basically, advertising is not the thing that you do, it’s the story of the things that you’ve done.
It’s easy to turn interesting things into advertising stories, it’s hard to make advertising interesting enough to reverberate though. 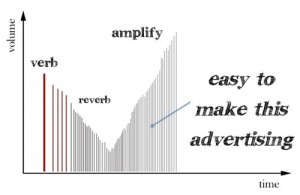 All well and good, but what’s this you were saying about an equation??
Ah, yes, the equation.  You mean this?

For those fearing that I’m stepping out of my safety zone with this, don’t worry.  Firstly, I did economics with econometrics (shhh, don’t tell anyone).  Secondly, my wife is a maths whizz, and not only helped me through this, but helped me through the econometrics too…
It’s a way to explain what sort of reverberations you may expect from the verb, the thing you do.  The letters stand for…
r1 = reverberations
v = the thing you do
q = quality of your product/service
b = brand warmth
r0 = reverberations of the last thing you did
It means that there are four ways in which you could make whatever it is you do reverberate more… 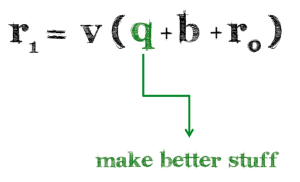 Pretty obvious, right?  People are endlessly twisting the “advertising is a tax on…” prefix to fit with ‘shitty products’, ‘bad design’, ‘poor customer service’ and so on, but it’s right… the modern age is a place where advertising can’t even sell a bad product once, to paraphrase David Ogilvy.
Next up… 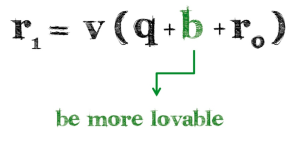 Brand warmth measures; gotta love ’em, eh?  The best way to increase them for a lot of companies is not to spend more on a new repositioning, or more ads, or a funnier scriptwriter.  It’s to be human, generous and lovable.  To be able to respond to people when they say ‘ooo, I like that thing you did…’. 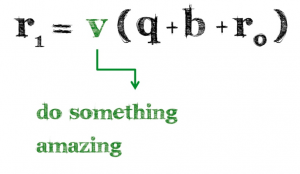 The action you take, the transformative thing you do.  Be it as large as the Pepsi refresh move, or as locally important as Converse saving the 100 Club, as technologically astute as Best Buy’s Twelpforce… what’s the thing that’s going to set you apart from not just competitors, but how everyone else acts.  If you want “earned media”, you’ve really got to try and earn it.
So, finally, my favourite bit… 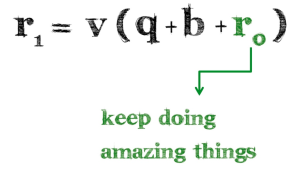 The way the equation works is that the reverberations of the last thing you did feed in this time too.  So if you’ve not done anything before, then sorry, but you don’t get anything here.
Which means if you give up after one or two attempts, you’re really not giving yourself a chance.  The sorts of companies that get talked about in the social space are, seemingly, the usual suspects. The people who’ve done various other things before.  Because they try again and again, and the reverberations from what they’ve done before play back into what they do next time.
That’s where I am so far… I know it’s still a bit ‘fat’ in places (‘verb’ for instance conatins so may different variables, like ‘culture’, ‘company type’ and so on), but would love to hear what you think.