I’ve been thinking about Verb, Reverb and Amplify again this week. 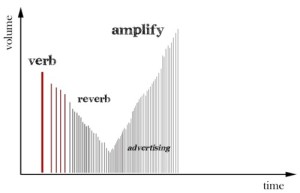 …verb is the wonderful thing you do, reverb is the natural social echoes that creates, and amplify is where you tell that story using advertising so that more people see it.
I’ve been booting the analogy around with Simon, Toby and Andrew.  And through doing so, there are now lots of other interesting ways to think about the issue of ‘phasing’ your social activity with more traditional activity.
More on all of those another day.
But one of the things that felt immediately relevant was the issue of volume.
Marketing folks want things to be a hell of a lot louder than normal folks, because the louder they become, the more people hear them.  And so their sense of what’s appropriately loud can go, well, a bit off sometimes.
Watch this…
(via Mark, thanks chap)
That’s the advertiser’s own cut of what happened.  And yet it still manages to come over all… creepy.
Look at the poor guy, Chris.  This is not the posture of someone enjoying the experience… 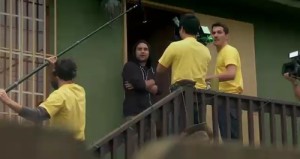 Since then, the begrudgingly-willing protagonist, Chris, has tweeted a link to an article in his local paper about what happened…  an excerpt:

They [Wheat Thins] never stopped to think of the emotional damage they’d inflicted on poor Chris, with his now 13,000 followers, mostly 16, who ridicule him endlessly as “Wheat Thins Guy.”  As I peruse the @ChrisMacho stream, I see today’s hater is from “Mentally_Stoned”: “just saw the commercial. checked out ur profile to see if ur real, i have no intention of following tho.”

“I have a lot of haters,” Chris says. “They expect me to be talking about Wheat Thins. People think I owe them something.”

Wheat Thins wanted what they did to be really loud, to turn the volume up to 11.

They never stopped to ask Chris if that was alright with him.  They just paid him a small, one-off fee.  And ruined twitter for him.
There’s a lesson in that for anyone in marketing, I think.  Just because you want it to be loud, doesn’t mean normal people do.