I thought I’d have a play around with Garageband on iPad.  Especially given it’s only £2.99.

In two hours I had this; The Theme from GMTC.  I think it sounds like a long forgotten theme from a sixties TV spy series.  But maybe that’s just me.

Gamages Model Train Club – Theme from GMTC by gamages
(CAVEAT: It’s not amazing, and clearly it’s not something I’d be nearly happy enough to say “this is a Gamages Model Train Club song”.  Not least because it’s not the whole band, just me messing about. Oh, and maybe also because nobody dies in any of the songs.  But for two hours work, I’m pleased.  And every sound in it was recorded using the Garageband instruments.  Which we’ll get to later.)
I’m delightfully surprised at two things; firstly, how much is possible to do in 2 hours (including learning how to use Garageband as I went along), and secondly what it says about the future of creating music, instrumental ability and so on.
And specifically ‘theme tunes’.
Now, learning how to use music recording and mixing software has never been particularly easy.
Indeed, in the case of the Cubase program (the first one I learned to use), it was almost like it was made intentionally hard, a barrier to limit  only those who really wanted to make music.
And maybe it’s the basic understanding of how typical timeline-based music editing stuff works that helped me out here.
But everything with garageband on the iPad is just so simple.  Want to move something, pick it up and drag, pinch to shorten, tap for options.  The program also lets you split the song into sections… you can see everything at once, or pick a section to work on. 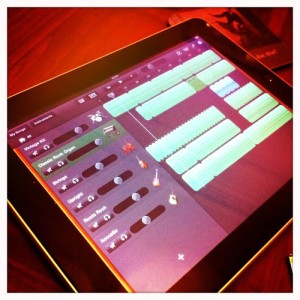 I suppose really we should expect nothing more from Apple than lovely usability.
But it’s so easy to pick up, I think anyone (yes, ANYONE) could write and record a song in a day.  Want your own theme tune?  Go ahead.
Which takes us on to the second part… thinking about giving musical ability to people without musical ability, as it were.
Here’s the other thing… Garageband comes loaded with tricks to help you play something if you can’t play something.
I can play guitar, and so the process of playing guitar parts on the iPad annoyed me immensely.  But for someone who can’t play guitar, I can realise how helpful the guitar function is, because I experienced a similar thing with the keyboard instrument section.
It looks like this… 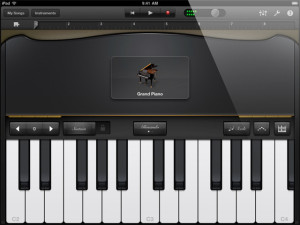 Pick the instrument you want to play, and tweaks to teh sund (echo, reverb etc) you want to make.  Then play.
That, of course, is of little use to me, as I can’t play piano.
I can pick notes with a bit of trial and error, but that’s it.  However, I know what key I’m meant to be playing in.
So I select that key, and ask it to play a certain scale (minor blues, for instance)…
…and it gets rid of all the other notes that aren’t in that scale… 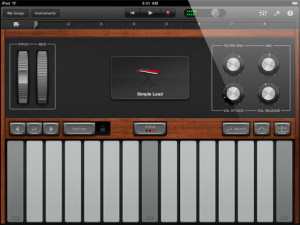 Yes, that’s right… ANY key you press now is right.  No bum notes, no mistakes.
….I know…
…THAT’S CHEATING!!!!
As a musician, I’m torn between this being the most wonderful new tool ever, and a soulless, hollow experience.
I guess if you were being a smartarse about it, you might call it “the democratisation of musical ability”.
It means that millions and millions of people will have had two barriers removed from the process of making music to share; the inability to record and order a song, and the ability to play in the first place.
Clearly, I think this could have a massive impact on the music industry; from a simple supply and demand model, it’s already creaking from oversupply.  And now Apple have provided the tools for many, many more people to add to that supply.
No doubt soon we’ll be hearing of the first number 1 single recorded solely on an iPad.  Whatever being the ‘number 1 single’ means anymore.
But I wonder if there’s a bigger threat to musicians… the use of incidental music, theme tunes, backing tracks and so on.  Now you don’t have to either nick someone’s music to use as a bed to your video, or pay for generic incidental music either.  You could just make some up.
Make a theme for a company video.  A theme tune for your company.  A theme tune for you, even.
But who says what you make up will be original, either?  There’s only so many notes, and so many orders you can put those notes in.
Is the ‘Theme from GMTC’ totally original?  I both think so, and doubt it.
I think so, because I wasn’t copying anything in particular, I was just playing around.  And I doubt it because in the whole history of music up until last night, someone has undoubtedly played that melody before.
My head is swimming now, thinking about the repercussions of this.
But one thing is clear; the industry and infrastructure around music that’s left over from the 20th century just became that little bit more unfit for purpose thanks to Garageband on the iPad…