Prologue
~ the end of the beginning ~ settlers in a new land ~

Over the past month or so, various scraps and stats, headlines and postscripts have made me think about the end of the beginning for social networks, specifically when it comes to companies and brands settling these rich, new found territories.

Of course, we’re at such an early stage in the game, it’s a bit daft to be drawing conclusions…
…a little like trying to work out how your game in Civilization is going to pan out from the first ten moves; the rest the map is black, centuries stretch out in front of you where anything could happen… 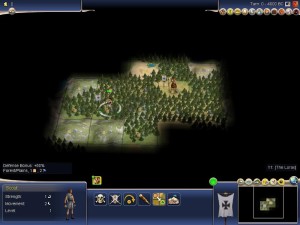 But still, it’s the game we’re living in, we’ve got to play it as we see it.
As settlers in this strange new land (yes, sorry to mix up vintage gaming references), we’ve got to build upon the experience we’ve gained through the first few harsh winters and start to thrive.
So in that spirit, I wondered if I could try and draw some strands together to make a little sense of what’s going on; if I fail, well, then it’s an interesting hotchpotch of links for you to follow at any rate.
It breaks into three general parts… the first of which is ALL ABOUT ME…
well, isn’t all social networking?
Part I
~ farewell to foursquare ~ getting out what you put in ~ I’ve kind of dropped out of two social networks of late.
I haven’t checked in on Foursquare since November 14th.  Looking now, I have 29 friend requests pending too (sorry if you’re one of them). 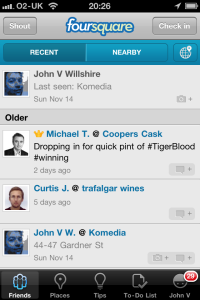 There didn’t seem to be any point, for the time being at least.
There was no incentive, no interesting company stuff happening, nothing I could see on there that I wasn’t getting from twitter.  Foursquare in the UK is a waste of effort in the longterm, at least for the time being.
I’d suggest in the short term it’s as good a way as any to orient yourself with the principles and opportunities behind Location Based Services & Games.  So don’t despair, it hasn’t ALL been a waste of time.
And, of course, there’s interesting things happening in the US, such as the Foursquare & American Express partnership launching at SXSW, but until more interesting stuff happens in the UK, it ha become pointless pointification.  Ironically.
NB – You’d have to be an utter cynic to suggest that launching a new interesting partnership with a financial leviathan at SXSW’s story hungry tech press is the perfect way to pump the value of Foursquare before trying to sell it before the hypothesised tech bubble bursts… and I’m not that cynical.
Oh, and for more extensive, smarter contemplation on falling out of love with Foursquare, you should read Anjali’s excellent piece.
UPDATE… of course, foursquare done went and released a new version since I posted this.  Thoughts on that here…
The second thing I’ve dropped out of is Facebook, for the most part.
And not on purpose, either.
The technology pixies have stepped in to stop me posting nearly as much as I did; I had linked twitter directly in to update my status, which seemingly stopped working a month ago.
Then the Facebook iPhone app has stopped letting me post pictures from my phone.
So the only thing that really goes up on there is anything I’m Facebook-connected with, or the occasional thing I write or comment on when I remember to visit… 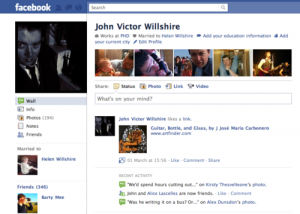 The biggest learning for me was this; when you stop putting stuff in to a social network, you pretty immediately cease to get anything out…
…you’re not sharing anything, so nobody posts a reply, so you don’t go on to reply to that, then drift past your feed on the way out, and see something else to talk to someone about…
Anyway, I haven’t gone back to fix the twitter link, or download the app again to see if I can make it work.  Being quieter on a social network, even the mighty facebook, just doesn’t seem like one of the most pressing things I ever have to deal with.
I’m not bothered about ‘neglecting Facebook’.  There’s no loyalty there, whatever ‘loyalty’ means in social network land.  I mentioned this in the Myspace post a while back…
“people aren’t on your platform because they’ve invested emotionally in your platform.  They’re there because they’re emotionally investing in the relationships with their friends.”
I reject the notion that people will continue to go back to a platform because they’ve put so much effort and time into it, uploading lots of photos and the like.  That assumes that people behave consistently and rationally… and we all know that’s not true…
What does that mean for the social networks themselves?


Part II
~ the endless wax & wane ~ social behaviours not networks ~ I don’t need to kick Myspace any more than I already have previously.  But something Neil linked too about Last.FM; it’s a piece written by Stefan Meeuws on TNW titled “How long is Last.FM gonna last?”, and it contains the following quote…
“I fear now Last.fm is heading in a similar direction as Myspace has been for the past year: oblivion. Many people do have a Last.fm account, but what percent (still) deems it an essential part of their online experience? Who still uses it for anything but scrobbling (and possibly listening)?”
Now, this is a provocative, contentious question to ask (go and have a look at the comments to see just how provocative), and given my love for Last.FM, I’m loath to make a judgement about it (because, of course, I don’t want it to be true).
Instead though, it’s reminded me of the one truth we’ve established about social networks in ten years so far…
…at some stage, social networks start to die and don’t know what to do to turn it around.

And yes, whilst in March 2011 we can happily think “Facebook has won”, here’s a snapshot of 2006 for you…
“The Secrets behind Myspace’s Success”
“Will success spoil Myspace.com”
“What went wrong with Friendster? Why is MySpace any different?”
Everything changes, yet everything remains the same.
Are we destined to see every social network die wax and wane?  Grow exponentially for a while, and then slowly die off as we tire of them?  Are they merely the plaything of the increasingly shortening attention span of our collective conscience?
My desk mate, the very clever Clare, having read the draft of this post suggested the following…
“Did you watch that wonders of the universe thing on Sunday with the cute northern professor™..?
It’s rather reminiscent of this – you can think of the stars as a metaphor for the various networks – all have a finite lifecycle – some stay small but last a long time, some  get very very big, but sooner or later they all implode.
And as the actual universe tends towards entropy similarly the ordered conceptual universes of social networks ultimately break down / are abandoned as they are unable to encompass all that people want to do.” 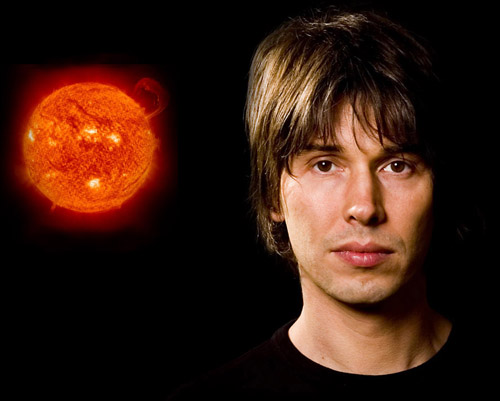 It’s a big thought… do social networks tend towards entropy?  Is everything they do to save themselves a futile gesture, like jumping off a wall and flapping your arms to try and escape gravity?
Even Facebook, the ‘winner’, is in a constant race to add feature upon feature upon feature to keep people interested; for instance, they’re holding discussions with Skype again about video calling.
As an aside; video calling through Facebook brings up a whole new set of questions about data ownership & privacy…
Then we’ve got the new kids on the block.  In the early noughties, everyone had an idea for a website to sell things.  Nowadays, everyone has an idea for a social network.
At least the former idea was based on a notion that businesses usually need to sell something to someone to make money.
The afore-mentioned bubble has me a little worried; when something like Quora is even rumoured to have been valued at $1billion… well, that’s getting on for double what Murdoch bought Myspace for.
Hmmmm.
Investing huge amounts of money in social networks doesn’t strike me as the most sensible of ideas, especially given the rickety financial state we find ourselves in.  Maybe it’s like the old joke; how do you make a small fortune in football?  Start off with a large fortune…
Yes, I’m probably not qualified to be talking about financials and business scenarios of multi-billion dollar deals.
What I do know, I guess, is people and behaviour.  And divorcing the social behaviour from the social networks is very important.
I don’t believe for one second that people will tire of coming together in communities via the internet; it is the greatest connective technology we’ve ever created.  It takes the root and core of who we are as a social species, and magnifies it a thousand times.
But I wonder if it will prove impossible for one company or network to own that.
Our restless, fickle, irrational nature may just mean we’re destined to flit from one platform to the next, finding new groups and experiences to become excited about, with existing friends and new ones.
Take, for instance, Instagram.
You take photos, add vintage filters (a la Hipstamatic), and it shares them in a twitter-esqe fashion into a feed made up of you and your friends, who then like them, or comment on them. 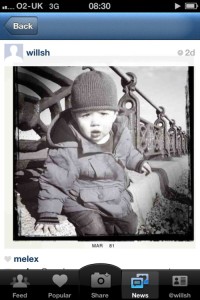 For the time being, I’m hooked, I think it’s a wonderful thing.  I look at the community of friends I have on there, and I see mostly people I knew before, with a few new people I’ve met through there. (I’m ‘willsh‘ on there, in case you wanna be friends).
UPDATE: read Dan’s brilliant piece on Instagram
Thing is, every time I’m uploading things on Instagram, I’m not on twitter, or facebook, or wherever else I might be.
And indeed, wherever else I used to spend equally as much time.
Eventually though, there’s no reason that I won’t drift off into something else.  It won’t be on purpose.
Something else shiny will catch my eye, a feature will stop working, a connection will be lost, the stream of other photos may just dry up.
Now… if this sort of thing happens all the time, to a lot of people, it has significant implications for what we, in agencies, do with and for our clients in the world of social networks.
I’ll expand on that more in Part III…
~ to be continued ~