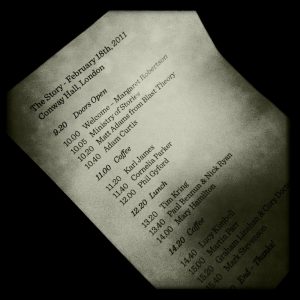 The Story on Friday was fantastic.
To be honest, after last year’s day which I got so much from, a part of me thought it could prove to be too tough an act to beat.
It’s close.  It’s be a split decision.  And I think… this year takes it.
Mainly because it’s left me with one big, exciting and slightly worrying thought.
And it’s about the increasing difficulty of telling a story from a single point of view.
Firstly, just looking at how many differing accounts of The Story itself..
Matt Locke (chief Storyfier) sent round an email on Sunday morning listing some of the ones he’d seen already…

…and there’s more I’ve seen since.
Including this from Rishi on Storify which lets you collect lots of other folks tweets, pics, blog posts and the like.  It’s a story about stories, a metastory.
(I may have to play with Storify more).
But there is no single account, no one place to go to for the official story of The Story.
Not that I’m suggesting there should be, you understand, just that if someone wanted a fulsome and thorough account, you’d have to say ‘ooo, read this, then watch that, and look here, then go there…’ and so on and so forth.
(Maybe that’s what Storify has been built to do.  Anyway, I digress…)
Then there was Adam Curtis’s talk, during which you could have heard a pin drop.
For me, he deftly and powerfully demonstrated how the new age of storytelling through the internet will be phenomenally different from the previous era of ‘one trusted voice’…
…you’ve only got to look at how I’m following the Libyan situation on the Guardian Liveblog as I sit here… 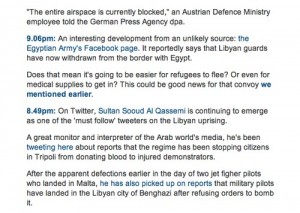 A combination of twitter, facebook, official report, unofficial reports, and a 24 hour rotation at The Guardian newsdesk.
Reporting has become more like assembling a Lego model from a million pieces, but the piece are kept in a box three times the size of your house, and you don’t know what the pieces look like until you pick one up…
Anthony’s written a great post on Adam’s talk, and states “the caveat for these notes is that I may have at times missed the point, or got the wrong end of the stick, but here’s what I heard”…
Again, just one side of a story.
Time and again, we heard a different take the same story from Friday’s speakers…
Very rarely will just one voice tell a story.
Infrequently will you hear just one side of events.
Never will everyone’s version of the same thing match up.
Even when there’s consensus, the retelling of the story will evolve and distort.
It’s not an ‘internet thing’, really, it’s a people thing.
It’s what happens when you give a group of people an opportunity to speak.
But it’s not the world that journalism was built to deal with.
And it’s not the world that the vast majority of marketing companies and structures were built to deal with.
I was having coffee with Russell last Wednesday, and he made a point about the internet and marketing along the following lines…
“…we’ve been trying to use the internet for over ten years for marketing, and it’s just not very good for it”
Worrying, and true.
I started thinking, over the weekend, maybe it’s because of the stories we try to tell.
Too many clients want to sit in a room and buy one story, told by one agency, maybe even one voice, to meet the objective of one brief…
Then that one story, in a perfectly reduced, compressed and beautiful expression, can travel outwards through the media multiverse and everyone will repeat it, endlessly, perfectly…
Too often that’s what asked, and too often that’s what agencies are happy to serve up.
If you want to tell stories about companies well on the internet, in ways people care about and take notice of, it’s going to be hard.  Really, really, really hard.
Time, effort, investment, experimenting, LOTS of failure, learning, adapting…
…all the stuff every agency and client loves to pay lip service too, but ends up just apportioning a small part of the available resources to… ‘because we’ve got to make sure we still do the stuff we know works‘.
Well, maybe it’s time to ask for ALL of the budget.
If you used all of your budget and resources in this way… then you’d have lots of little story fragments out there.
Interesting bits here and there, no one thing mass in it’s own right, but as many different and thought provoking stories from within your company and customer base as you can create.
A thousand different stories about your company or brand would add up to one riproaring tale.
]]>