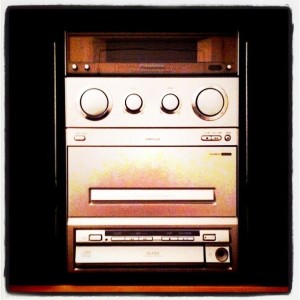 We went looking at cars yesterday. Second hand, enough space for kid and stuff, that sort of idea.

The salesman at one garage, after going through all the spec of the car, leaned over slightly, and with a conspiratorial twinkle added ‘…and it’s got a six-CD changer in the boot’. He might as well have said it was steam powered.

On Thursday, I met a lovely guy who writes music for ads, and produces bands too. So he’s got a good inside track on the music industry. “You just hear so many stories” he said “of well established bands who just can’t make the financials on CD sales stack up”.

This morning, I used this picture of my CD player as the latest submission to http://Instaterrestrial.tumblr.com. It looks like a lovely, friendly robot. But I realised it’s the only thing I’ve used it for in months and months… it sits dormant, the CD tray unloved & unused.

It’s the dog end of the CD days, isn’t it? And I don’t even see a small, passionate fanbase for the format like you have with vinyl.

“You can spill coffee on them and they’ll be fine” they said when they launched CDs. Very soon, all we’ll be using them for is coasters.