Last weekend, I had to build a Myspace equivalent.

No, not the whole thing from scratch.  That’d have taken longer.  Five days, maybe…
Nope, just a page for our band, Gamages Model Train Club.  Over the course of an afternoon, by stringing together bits of Tumblr, Soundcloud, iTunes, Facebook, Google Analytics and Feedburner, I made something that meant we’ve got somewhere where people can:
i) listening to / buy songs
ii) declare their love for the GMTC (or ‘like’ as Facebook would have it)
iii) follow what we’re up to
iv) subscribe for future updates
It’s here, if you’re so interested: 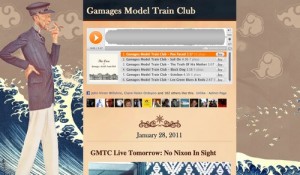 But hang on, you say, Myspace is still in existence, and gets millions of people sailing through its straits every day.
And what’s more, they’ve recently launched their new version.  It’s easier to use than before.  It’s got lots of different and new features…
Why not keep using it?  Why leave now?
Well, there’s three things contributing, from a personal ‘end user’ perspective, all of which I think are good lessons for Facebook or indeed any social platform that’s being built to last.
And these are they…
Never stand still
Nobody can ever accuse Myspace of ever having been terribly easy to use.  Wanted to change your profile?  You had to learn some HTML (or at least have the ability to copy it from other places).
But before the News Corp takeover, at least there were piecemeal improvements… week by week, new things would emerge, be talked about, asked for by the community or created internally by the team.  And it gave the people at myspace something to talk to people about.
Then it stopped.  Dead.
I think what happened is the same that happens when any big, old company takes over a small, nimble, new company.  The new company becomes subject to the same rules and expectations as the new one.
Don’t launch things small and often, let’s launch things infrequently, but talk about all the changes we make at once.  So don’t talk about anything in between that spoils this, please.  Oh, and we need a major review of what we’re doing with the site, platform, tech, so don’t do anything till that’s complete….
…and so and and so forth.  By trying to sort everything all at once, as old, established companies want to, and as you’d have to do with a newspaper redesign, Myspace stopped evolving.
It was dead in the water whilst the new crew sat around debating, discussing and analysing what it was that made the engine work best.  And the good ship Facebook sailed right on past…
Lesson one:  keep evolving in the open, trying things consistently with the people who know your platform best (i.e. NOT you, your keenest users)
Aim for simplicity
Here’s the new Myspace home page.
In between the ads, it’s and endless array of buttons, options, drop down menus, updates, messages waiting…

Every time someone has a good idea, it seems to get ladled on top of what’s already there.  I’ve started to lose track of where everything is, and how to do things.  I can no longer work out how to remove some old songs from our profile (and believe me, I’ve looked through all of these options).  there are ten ‘major menus’ along the top.  TEN.  And then, to add to the confusion, the eleventh is a drop down offering ‘more’…
It’s an awful user experience that keeps getting worse.  And this is the new improved version.  No wonder people leave never to return… they probably can’t work out what they were there to do in the first place.
Lesson two:  if you do keep adding stuff, then more sure you keep taking stuff away too… clutter sucks
Small networks can make you… or break you
Despite the other two being important, I think this one is the killer.
Myspace for the GMTC has become a cold, dead world, inhabited by the occasional spectre of another band pleading ‘…please… come and see our band…‘
Of course, this is just our little corner of Myspace, where our friends, fans and other bands we like have stopped participating.  It’s not true for everywhere.  Not yet, at any rate.  So why is it important?
If (as Shirky, Watts et al propose) we are tightly connected as small groups, and loosely connected as large groups, the disappearance of a small group can have bigger repercussions than just the people within that group. 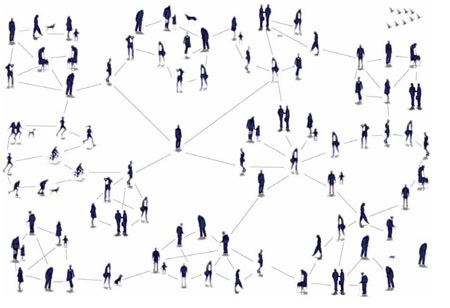 When a social network passes out of favour in a small network, the large network suffers.  The loose connections that held the wider network together start to disappear.  So the occasional thing which crossed over into different tightly knitted groups has also disappeared.
Our group has stopped functioning as a node in the network.  Just one small network has disappeared, yet the repercussions go beyond just that group.
There feels like there’s less going on, there’s less diversity.  If this starts happening with more and more small networks, it’s obvious that the large network suffers.  It becomes a less interesting, less lively place.  It becomes more boring.
And when it becomes boring, people have got no reason to come back.  Which is a pattern which can start repeating across the whole network, but spreads like a virus from small group to small group, as they’re loosely connected to each other.
All common sense, really.  And something you’d try your hardest to stop happening, if you were running a social network.
However, it’s really hard to spot it.
The more you’re focussed on the big, overall network numbers (this many unique users, that many daily hits), you’re going to miss the disappearance of small networks.
Or, rather, you’re not going to miss them, because the picture you’re looking at is far too big.
You really need to focus on early groups that were once hives of activity, but have dwindled to nothing.  Or those who were in your first 10% of users, but haven’t logged on for a month or more.
Lesson 3: Large network numbers are important, but put attention to what’s happening in your small networks.
So, three things, admittedly all from a very small network viewpoint too.  But it’s really important for social platforms to develop and keep that perspective as they grow (or indeed are bought by bigger companies).
Because people aren’t on your platform because they’ve invested emotionally in your platform.
They’re there because they’re emotionally investing in the relationships with their friends.
And if their friends move on… so will they.