As reported here in The Guardian, the latest OFT crackdown wants celebrities to reveal if they’re being paid to tweet about brands and products. 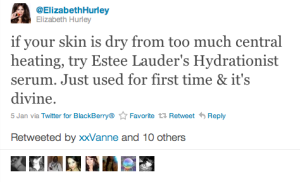 Which is, you know, fair enough I reckon.
And I don’t think people are daft enough to think that in the modern age of celebrity, it hasn’t been going on anyway.
But with only 140 characters to play with, it’s going to be pretty hard for people to add in a full statement along the lines of “This tweet was sponsored by The National Geographic Society”…
…so what I suspect we’ll see is some form of user-created shorthand for ‘promoted or paid-for tweets’, perhaps something like:
[PT]
It’ll be short, clean and clear enough to be included at the end of a message.
Crucially, it won’t be something controlled centrally by twitter (which would be an unmanageable task), but a common practice that emerges from the PR & social ends of the industry.
What’ll be most interesting, if it happens, is seeing just how many tweets in the stream start to feature [PT] or equivalent… or do celebrities really just tweet about stuff because they like it…?