“What’s the most resilient parasite? An Idea.

A single idea from the human mind can build cities. An idea can transform the world and rewrite all the rules…” 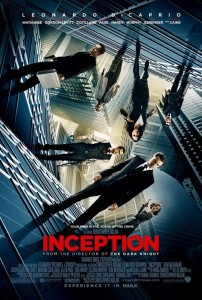 (This is a follow up to the previous post on MacGuffins and so on.  It’s worth reading that first.)

Now, I’m very certain I won’t have been the first to seize on this quote from Inception and bend it to fit some hinky marketing theory about social sharing.

I thought the quote had a beautiful simplicity of expression about it.  We all know that, at the end of the day, powerful ideas spread.  As we navigate the layer upon layer of modern communications though, it’s the how and why we’re increasing trying to unpick.

One of the contributors to the last post, John Dodds, said…

…and followed up with an explanation…

“Focus on the idea, the belief behind the company – why you’re doing what you’re doing and how you’re hoping to change the world for the better – and focus your efforts on making it social ie spreadable discussable, supportable…”

Beautifully expressed.  Of course, the thing is, it all amounts to same thing; Object-Idea, Social Idea, MacGuffin.  It doesn’t really matter what you call it.

Let’s go back to the movies.

I found a post by Douglas J. Eboch, who’s a screenwriter (and a fine fellow I reckon, given he uses his middle initial… that’s always a mark of good character…).  It was on MacGuffins.

“I define the MacGuffin as the object or goal that the characters’ mission is focused on. For example, in Inception (written by Christopher Nolan) it is the idea that Cobb and his team are trying to implant in Fischer’s dreams. In Casablanca it is the letters of transit. In Sweet Home Alabama, the divorce papers. In Avatar (written by James Cameron) it’s the goofily named Unobtanium.”

The thing that gets people moving, doing things, makes you care about finding out what happens.

“Inception tells us what the idea that Cobb must implant is, but do we really care? It could be just about anything and the movie would still work as well. It’s simply a device to get Cobb and Arthur and Ariadne and the others into a dangerous dream world that will test their skills and force their characters to undergo internal change.”

It doesn’t matter what it is, or what it’s called.  It’s what it does to people.

Back to our MacGuffin.  Well, what I called a MacGuffin.  John called it a Social Idea.  Hugh called it an Object-Idea. You’re maybe thinking of calling it something different, putting your own spin on it, something that works for you to help explain to others.

It is all of these, and it is none of these.

The Macguffin here is a MacGuffin.

It doesn’t matter what it is called, or what diagrams you use to draw it.  What matters is what happens to the people who’re talking about it, debating it, remodelling it, chasing the perfect version.

It changes us. It plants an idea, a seed inside our head, which starts to grow.  And when we talk about it to others, it starts to change them too.  We can express it however we like, and it will take many forms, but that idea will continue to spread.

And that idea is that we’ve got to change the way we do things.

The idea that the future of marketing, branding, advertising, media and so on is very different from the past, and indeed from the present.

The idea that companies whose purpose isn’t an social, spreadable idea actually might not have that much of a future.