For the past couple of days, I’ve been trying to iron out some wrinkly thoughts that were started off by Hugh MacLeod’s post on ‘Object-Ideas’.

I’m working on various diverse client things that will benefit if I get to an answer, but for now it’s just some thoughts aired in the open to see where it takes me, and what you clever folk think too…

Anyone, this is what I’m netting out at presently…

There’s three things encapsualted in this term; one from Mark Earls, one from Hugh, and one from Alfred Hitchcock.  I’ll explain…

“The Purpose-Idea is the “What For?” of a business, or any kind of community.  What exists to change (or protect) in the world, why employees get out of bed in the morning, what difference the business seeks to make on behalf of customers and employees and everyone else?”

When I looked back at the little smileys diagrams I made for the Communis Manifesto, I realised I’d drawn it in; it’s this bit; at the heart of the company… 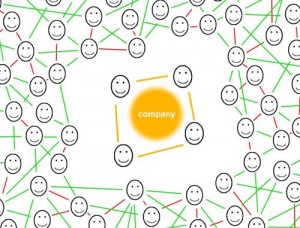 Brilliant companies and communities of course thrive of a communal, shared purpose. So even with no connection to the outside world (the guys around the outside of the diagram), a great company retains its Purpose-Idea

“The Social Object, in a nutshell, is the reason two people are talking to each other, as opposed to talking to somebody else. Human beings are social animals. We like to socialize. But if think about it, there needs to be a reason for it to happen in the first place. That reason, that “node” in the social network, is what we call the Social Object.”

Again, back to Communis… I’d drawn those in too, but this time more purposefully (I referenced Hugh’s ‘social objects’ in the thesis). 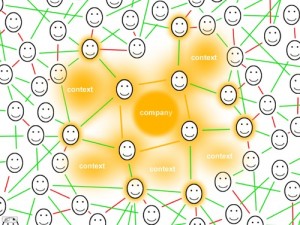 In the diagram, the ‘contexts’ referred too are the social objects where you connect internal to external… encouraging the company to participate in the social world.  Make & do things that are of interest to people, form relationships, collaborate and so on and so forth…

Well, Hugh’s point is that the two things, Social Objects & Purpose-Ideas, can be (and most often are) quite distinct from each other.

If you do something amazing in the social space (Whassup, Meerkat, Old Spice etc), then people will like you more for it.

But it’s not really what you’re about.  Your Social Objects aren’t really that linked to your Purpose-Idea… 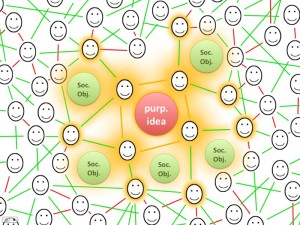 It’s just the things you made to make people talk about you more.

So that, somewhere down the line, they’ll think ‘oh yeah, they’re the guys that did X, maybe I’ll buy their stuff that they also do…’

But as Hugh puts it:

A social object on steroids i.e. an Object-Idea, is far more powerful. Because it’s actually talking about stuff that actually matters to people.

It’s not enough for people to like your product. For them to really LOVE it, somehow they’ve got to connect and empathize with the basic, primal human drives that compelled you create your product in the first place. The Purpose. The Idea.

Which got me thinking about what Hitchcock called the MacGuffin… 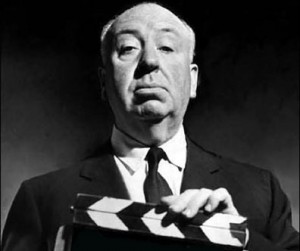 It’s the thing in movies that gets everything, well, moving.  That which all the protagonists will do anything for.

So if we take it that back into the world of Social Objects and Purpose-Ideas, we can define our  MacGuffin here as: 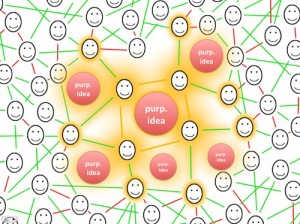 Which, I reckon, has lot of appeal for any company wrestling with modern communications…

For instance, you stop creating limited shelf-life social objects.  Things created to simply get attention, and then become leaden relics you don’t know what to do with, but feel you should persevere with because so much time, effort & money has been spent on them.  With a great MacGuffin, everything you do socially feeds back into your central Purpose-Idea.

Which also means that what you do socially starts to inform your Purpose-Idea; it leads a company more rapidly and quickly into areas in which they can flourish, because it’s created with people who’re interested in what it is you do, not just what you say.

So, to conclude for now, at the core of the MacGuffin, I’d propose there are two principles:

…which means it’s not just a company’s marketing that changes, it needs to be the company itself.

Otherwise, amongst the rare runaway successes, we’ll keep on seeing lots of sausage companies asking you to make videos.

Now, clearly, I need to think a lot more about the implications & actionable stuff out the back of this. But hey, it’s a first stab.  Thoughts?

(as an aside, inspiration for the term comes from an economic device called the Edgeworth-Bowley Box – not a something messrs. Edgeworth & Bowley worked on together concurrently, but thinking that was developed over time, which reflects the continuum of this idea I think)